The Mandala is a drum pad with a difference: it has a Virtual Brain and its manufacturers claim that it's "the smartest thing you'll ever hit with a stick.” 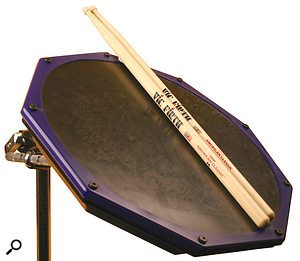 Synesthesia are a company who specialise in technologies that use touch and movement to control sound and light using infra-red light sensors, variable-position touch sensors and software. The Mandala is a drum‑like instrument and in terms of sophistication it reminds me in some ways of the old Drum Kat, which could use pad hits (and even hand pressure) to manipulate and trigger MIDI data. But whereas the Drum Kat was all hardware with a very obvious multi‑zone playing surface, the Mandala looks like a simple electronic drum pad with no controls or displays whatsoever. However, in addition to being a surprisingly sophisticated controller, the Mandala also includes an impressive sound library, the secret ingredient being the included 'Virtual Brain' software. Essentially, this puts all of the features and controls you'd expect to find in an electronic drum brain (and some you wouldn't!) into software that runs on your Mac or PC.

Despite its misleadingly simple appearance, the Mandala can provide up to seven concentric, velocity‑sensitive sensor zones, each of which can be used to trigger a different sound via the Virtual Brain or, alternatively, to trigger other MIDI devices or software instrument plug‑ins within your DAW. Perhaps its name provides some clue as to this structure, as one meaning of Mandala is a 'spiritual diagram' presented as concentric circles.

The Mandala connects to the computer via USB, which also powers it. Installation is very straightforward, but once the Virtual Brain software has been copied to your computer's hard drive, it should be left with its folder setup intact so that the support files can be recognised. Mandala v2.0 features four gigabytes of sound samples, if you include the Ludwig Black Beauty snare samples that come on a second disc.

Once launched, the Virtual Brain software is used to configure the settings for the various zones. Up to five Mandala pads can be handled by the Virtual Brain, and each has a unique electronic serial number so that the software knows which is which.

A good way to explore the program and to get a feel for what is on offer is to choose one of the presets, then have a bash and see what happens. But before bashing, you'll need to configure a few details. As the brain also includes sound-generation capabilities, you'll need to visit the Audio Pad/Setup and Drivers windows in order to select the audio driver you wish to use to output the audio. You can also change audio settings such as sample rate and buffer size, and it's possible to define a maximum level of CPU usage so that the Mandala doesn't hog too much of your computer. During my tests, I found that if I changed the driver setting from Core Audio on my Mac and then tried to restore it, I had to reboot the Mandala to get the sound back on.

Setting up a session is accomplished in the appropriately named Master Window. You can select presets, save your own settings, change volumes, assign effects (there are two effects sections), set the FX 1 and FX 2 levels, adjust LFO rate, and so on. An LFO is built into the brain and may be used to modulate effects and the data generated by the pad zones. A MIDI display shows the note and velocity info from each hit, as well as positional information relative to the centre of the pad. When saving edits, you can choose to save all zone and FX settings for the Pad, the individual zone settings only, the FX settings only or (if you have more than one Mandala USB) all the settings for all Pads in your kit. Though there are empty user slots for saving patches, you can also overwrite any factory setting you don't want to keep. The last patch in the library (number 250) is for controlling other MIDI devices, and selecting it brings up a window that lets you assign different MIDI parameters to each of the pad zones. 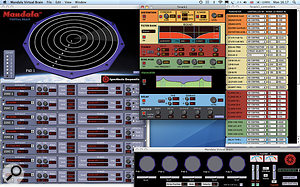 The Mandala's Virtual Brain sets it apart from other drum pad instruments and, because it's software, keeps the overall cost down.

As touched upon earlier, each drum pad can be divided into up to seven concentric zones, each with its own settings. Each zone can be used to trigger a different sound, either using the Virtual Brain's own sonic arsenal or by triggering external MIDI gear. Unless you're in the 'MIDI Only' mode accessed from preset 250, the pad automatically outputs MIDI notes on MIDI channels corresponding to the zone numbers. If you want to use some zones to control brain sounds, you can switch the various zone audio outputs on or off from the software. For example, you might set up five zones and then use three to control sounds from the Virtual Brain while using the other two to trigger virtual instruments, either stand‑alone or DAW plug‑ins.

A large sample library is included as the basis for the brain's source sounds, but it is also possible to add sounds from external samples (WAV, AIFF and SDII) to your Mandala library by copying them into the User Sounds folder. Some of the included samples are unpitched 'hit' sounds, whereas others can be tuned and used in a melodic way. A range of GM‑style sounds is also included, as well as a good selection of drum and percussion sounds, plus that large library of Ludwig Black Beauty snare sounds.

In a melodic context, you can think of the Mandala as being equivalent to a keyboard with up to seven keys, each of which triggers a different note, but the tricks you can do using the Virtual Brain take it way beyond this. For example, you can select from a long list of scale types, from major and minor to Gamelan and Indian, then select which notes to use from those scales. Using your choice of scale notes, you can set up arpeggio‑like sequences to be triggered by successive drum strikes, or even introduce random elements.

Using the controller assignment section, it is also possible to control pitch or effects parameters via playing velocity. Envelopes can be applied to the sounds being triggered and of course there's the powerful effects section, which has comprehensive routing options and the ability to set up multi‑effect chains. FX Rack 1 offers distortion feeding into a choice of filter types, to which reverb or delay can be added. FX Rack 2 starts with a different choice of filter types followed by stereo flange and delay. Reverb is configured as a master effect, so when it is switched on and turned up it will be audible regardless of the FX Rack settings. Many of the effect parameters can be controlled in real time; you can link parameters to playing velocity in the Controllers section of the Virtual Brain software, and assign the master LFO to modulate pitch and filter parameters, for example.

When it comes to playing style, the Preferences window lets you set the pad sensitivity by dialling in a velocity offset, so you could, for example, adjust it for playing with fingers rather than sticks. You can also create your own Hotkeys to give you direct keyboard access to your 10 favourite presets.

Preset number 250 allows the user to set each zone's MIDI channel and note number, and positional settings for controlling external sound sources. Once you have the preset loaded and set up, these assignments are retained by the pad after quitting the brain. While MIDI is still sent in normal operating mode, the MIDI data is always as set up in the individual preset, essentially mirroring what the Virtual Brain sends to its sound sources. 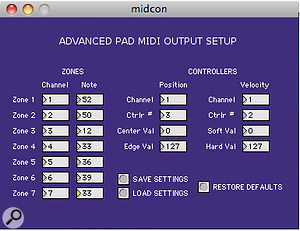 Perhaps the most obvious thing you notice when you first use the Mandala is the lack of any visual clue as to where one zone starts and another ends. Of course, these can't be printed onto the pad's rubber playing surface as the boundaries change depending on how many zones you set up.

The pad responds well to both finger and stick playing, and the velocity offset in the Preferences page helps optimise the feel, though it might have been more friendly to allow the user to set up separate stick and finger sensitivities and then save these within presets. Playing is definitely fun, though, and being able to create a scalic arpeggio simply by playing a drum roll within a zone gives an effect very similar to features in Roland's V‑Drum series. You can also play melodies by assigning different zones to different notes, or even create a super snare drum with each zone giving a different tonal nuance. If you want to output sequenced scales as MIDI data, any preset that uses a scalic sequence outputs those notes on its MIDI channel.

On the whole, the Mandala manages to remain approachable and intuitive while still offering plenty of capacity for creative performance. It doesn't get as complicated as the Drum Kat did, or even as complex as some aspects of V‑Drums, whose pads can be used to start or stop sequences set up on other pads. However, there are still more facets to Mandala than there might at first appear to be, not least due to how controller data can be used to adjust the effects dynamically in response to performance.

If you're after something to control a conventional drum kit with absolute precision, the Mandala probably isn't it, but if you want to add extra spice to your performance, with just a hint of unpredictability, it provides plenty of opportunities, both on stage and in the studio. Having the brain in software is a great idea, as it can evolve without the need to upgrade the hardware, and because there are no physical displays or controls, costs are kept to a minimum. It is rather a shame that the Virtual Brain can't function as a virtual instrument plug‑in, but then maybe there are technical obstacles to doing this that I haven't considered... In all other respects, though, it fulfils the requirements of being fun, affordable and musically stimulating.

Some similar features to the Mandala are available on Roland's HPD series of controllers, but that's the only thing I can think of that offers a comparable level of performance variety. Even then, the two products are aimed at different areas: the Roland units have their sounds built in, while the Mandala owes much of its personality to the software that drives it.

While the Virtual Brain software can only deal with a maximum of five Mandalas, you can use any practical number as straightforward controllers for DAW software. In this respect, the Mandala can be used much like any other MIDI controller, but the Virtual Brain is a stand‑alone application, not a plug‑in, so if you want to route its sounds into your DAW, you need to use an audio loopback program. None is provided, but the manufacturers recommend the free Soundflower program from Cycling '74. However, this means that Mac users need to set up an Aggregate Device in the Audio MIDI Setup page, and in my experience this can result in higher latency times than using a single audio driver.

While not always easy to control precisely, the Mandala is a very creative and musician‑friendly piece of kit that can add a new level of interest to a performance or recording.