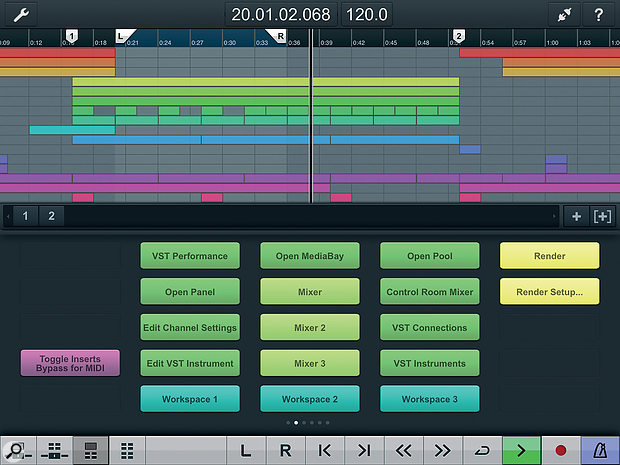 Cubase iC Pro is a remote app that can control Cubase from either an iPhone, iPad, or Android-based device. Once you’ve downloaded the app — for the purposes of this review, I’m using an iPad Air 2 with Cubase running on Windows — you’ll need to download Steinberg’s SKI Remote for Cubase iC Pro from the company’s web site. For iOS users this is a free download (because you pay £12.99$16.99 for the app on the App Store), whereas for Android users it’s a purchase of £11.24$16.99 (because the app is a free download on Google Play or Amazon’s Appstore). The advantage Android users have with this arrangement is that Steinberg offer a 30-day trial version of the SKI Remote so you can try before you buy.

Once you’ve downloaded SKI Remote, you’ll need to add it as a device in Cubase’s Device setup window, where you have the option of setting up authentication so that a password is required when establishing a connection. In a disconnected state, iC Pro will show a list of systems running Cubase, and you can manually enter your system’s IP address if it doesn’t show up.

iC Pro consists of three control pages: Project, MixConsole, and Key Commands, and each have a corresponding Settings view. Two of these pages can be visible simultaneously, and you can also have two Key Commands pages on screen at once. A transport bar runs along the bottom, and a tool bar is provided at the top with buttons to access settings, help, and to disconnect from the current system. The current Project Time is displayed, and tapping it alternates between the primary and secondary Project Time Display modes. The current tempo is also there, and tapping this lets you set a new tempo, which you can adjust manually or by tapping the Tap Tempo button, although this only affects the fixed tempo, not the Tempo Track.

The Project page shows a neat overview of your Project, much like the Overview Line in Cubase, and you can swipe left and right to scroll through the Project — the Project Cursor stays in the middle just like when Stationary Cursors is enabled in Cubase — and you can pinch to zoom in and out horizontally. Bizarrely, the ruler seems only to show minutes and seconds, and I couldn’t find a way to change this to bars and beats (even if the current project time was displayed in bars and beats), which was slightly annoying. The left and right locators are displayed on the time ruler and can be dragged around to change their positions (although this would be easier if they snapped to a bar). Also, unlike in Cubase, where the locator range is displayed in red when the locators are reversed, this doesn’t happen on the remote.

Beneath the overview is a Marker bar where you can jump to specific Markers by tapping them, or add new Markers or Cycle Markers by clicking the buttons to the right of the bar. Markers can be created even if the Project doesn’t contain a Marker Track (they will show up when you add one), although it would be nice if there was an option to automatically add a Marker Track the first time you create a Marker in a Project not containing one.

Finally, the Project Page Settings offers a few additional options for setting whether Auto Quantise, Precount, Punch In, or Punch Out are enabled.

The MixConsole view looks exactly as you would expect, although there are quite a few ways to configure what you see in the settings. You can set whether to see Record and Monitor buttons on each channel strip or Read and Write automation, and you can also set what channel types are displayed. Changing which Channels are visible on iC Pro has no effect on any open MixConsole windows in Cubase. You can also switch between seeing the MixConsole view or one of the Control Room’s four Cue Mixes, which is a nice touch. Since it’s possible to connect multiple devices running iC Pro to Cubase, you could have a situation where people were controlling their own cue mixes.

One feature at the top of my wish list would be a Track page containing Quick Controls and (where applicable) Expression Maps...

The only feature that had me reaching for the online help was when trying to set a fader back to 0dB, since I erroneously assumed double-tapping might do the trick. Instead you have to tap and hold the fader and drag horizontally away from it, whereupon a ‘magnetic’ 0dB point becomes active, making it possible to move the fader back to 0dB. Similarly, when you tap a pan control, a larger pan control is presented, and tapping the control and moving your finger vertically shows a host of magnetic points, enabling you to centre the pan or pick from other positions on the grid.

Last but not least is the Key Commands page, where you can have up to seven pages of buttons on a five-by-five grid, giving you the potential to assign up to 175 Key Commands. To configure the Key Commands, bring up the Key Commands Settings screen, and you can assign a Key Command by simply tapping the button you want to employ. A list of Key Command categories will appear, arranged in the same way as the Key Commands window in Cubase. You can either navigate the hierarchy of commands, or, if you know the name of the command you’re looking for, you can search for it by typing in its name. Buttons can be coloured or renamed via the Color and Rename buttons at the bottom of the screen, and you can also load and save page templates, which can be backed up via iTunes File Sharing.

My only two small gripes with the Key Commands page are that, firstly, in the settings, it would be nice if you could drag the buttons to reassign Key Commands; and secondly, I would have preferred Steinberg to use a tab bar to switch pages rather than a page view control. It would be nice to see the names of the pages and be able to, for example, switch to your Edit page or your Mixer page without having to swipe through the other pages.

I really hope Steinberg expand on the capabilities of iC Pro because there’s a great deal of potential for a remote app that can integrate directly with a sequencer, as Apple have shown with Logic and the free Logic Remote. One feature at the top of my wish list would be a Track page containing Quick Controls and (where applicable) Expression Maps, where you could see the Expression Map for the currently selected Track and switch articulations directly from the screen.

All in all, if you’re looking for an app to control Cubase remotely, and you want something that doesn’t involve smoke-and-mirror-type workarounds for Key Commands and controlling the mixer, Cubase iC Pro is probably the way to go, despite a few quirks. And if you’re using an Android device, there’s nothing to lose by checking out the 30-day trial.