This quality guitar amplification system combines the convenience of a soundhole pickup with the realism of a microphone.

Soundhole magnetic pickups are no new phenomenon, having been around since the early 1930s, and although the basic technology hasn’t really changed since then, the expectations of guitarists have. In more recent years, some talented, innovative individuals have focused their skills on producing high-quality soundhole-mounted magnetic pickups.

One of these innovators is English luthier Mike Vanden who, in the 1990s, developed the slimline, active Mimesis soundhole pickups. This range of pickups became quite popular, with the Mimesis Blend (a combination of magnetic pickup and gooseneck-mounted mini-mic) appearing on the acoustic guitars of many high-profile bands of the time. It wasn’t long before Fishman began working with Vanden on what was to become the Fishman Rare Earth series. These have enjoyed, and continue to enjoy, considerable success in their sector.

At the end of 2014 Mike Vanden launched the Mimesis Kudos Blend, a hand-assembled, switchable combination of microphone and active/passive hum-cancelling magnetic pickup, aimed squarely at the professional guitarist. Like any product from a one-man workshop, this product is available only in limited numbers each year.

The Kudos Blend follows the physical paradigm of the modern soundhole pickup. Six polepieces, adjustable in height for string-to-string balance, protrude through the top surface of the casing above a deep body that carries its integral microphone, double-stacked coils, preamp electronics and twin batteries. The top’s slanted ends extend beyond the body of the pickup as part of the screw clamps fixing the Kudos Blend to the soundhole edge. Brilliantly, the moving parts of the clamps run in a channel on either side of the pickup so that, even if you remove the securing screws entirely, the clamps themselves cannot move out of alignment or fall off during fitting. 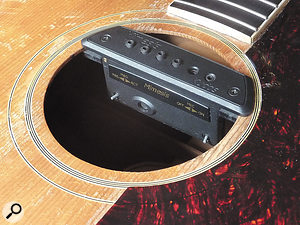 The casing is injection-moulded in a black glass-reinforced polymer composite with a textured, slightly sparkly appearance on the parts that are visible when the pickup is in position. The bottom surface carries the holders for the twin 3V CR2032 lithium coin cells.

The Kudos Blend carries a couple of switches. The switch nearest the player changes the pickup between active and passive modes, while the other acts as the off/on switch for the microphone. There are two microphone options — either a built-in, high-quality miniature condenser (Option 1) or a Lemo connector (Option 2). The preamplifier behind the Lemo is optimised for DPA’s super-cardioid DPA 4099G or omnidirectional DPA 4061 miniature microphones.

Output is by way of a metre or so of three-conductor cable and a Fishman Switchjack end-pin socket. Inserting a mono guitar lead into this jack powers up the Kudos and supplies a mono, pickup-only output. With a stereo lead the pickup appears on the tip with the microphone available separately on the ring for direct connection to a mixing console, a blender-type preamp or two-channel amplifier. You can use a stereo-to-twin-mono splitter lead to gain separate access to pickup and microphone. Since you must not connect the Kudos to a microphone input with phantom power present, Mike Vanden offers a phantom-powered splitter/stereo active DI box with a TRS input and separate microphone and pickup outputs on XLR.

Fitting the Kudos Blend to my guitars was

simple; the ability to drop the clamps off their screws entirely without having to spend a few minutes shaking your guitar upside-down to recover them was a godsend. I found that that meant I could fit the Kudos Blend to any of my guitars without slackening strings — even guitars with small soundholes.

The spread across the six adjustable polepieces is 51mm, and lining them up with the strings of my guitars took nothing more than a little amount of rotation in the soundhole (I tend to push the bass end forward and the treble back when doing that). The Kudos Blend is supplied balanced for use with bronze-wound strings, and the polepiece heights are easily adjusted with a suitable Allen key.

The Kudos Blend is designed to give you flexibility in use, so you have the choice of four basic operational options: active or passive pickup mode, with or without microphone. With the pickup in its passive mode going into my PJB AG300 acoustic combo with EQ flat, I found a smooth, warm, believably acoustic character at low to moderate volume, with a more electric air in the upper registers, which came more to the fore as the volume increased. Adding the integral microphone and playing around with the mix between the two sources gave me the basis of an excellent sound, and I found my personal sweet spot in a slightly microphone-heavy mix with the lower frequencies pulled back a bit on the mic, and the higher frequencies reduced on the pickup.

The active preamp boosts the output level by 9dB and changes the character of its sound. With a bit of EQ, it is again possible to get a very believable acoustic sound in active mode, especially when strumming, although — and this depends upon the particular guitar to some extent — higher-register single-note lines start to sound as though they are coming more from an archtop guitar, rather than a flat-top. Bringing in a touch of microphone helps restore a level of realism.

The integral microphone on its own was a real revelation, as it sounded a lot better than I had expected. EQ’ing out the boxiness that inevitably comes with an internal mic gave a really usable sound that also recorded very well. Although I doubt that I’d use it as the only mic on a solo guitar recording, it has an attractive sound character that should work well in a mix. Compared to the two external DPA microphones that the Kudos Blend’s Option 2 is designed for (and which I happen to own), the internal mic holds its own very well. However, to my ears, the DPAs give an air of smooth quality to the bass and lower mids that the Kudos’s internal mic can’t quite match — but it’s a close-run thing, and personal preference and price (of both pickup and DPA microphones) may well be the decider.

The Mimesis Kudos Blend may not be the game-changer that the original was, but it does set down a marker at the high-end of the market that is going to take some beating.

As a magnetic pickup, its performance is extremely impressive in both active and passive modes. Without any contribution from the microphone the passive mode (which bypasses the preamp) delivers a sound that is more than usable on its own. Adding in the microphone adds a great deal to the quality of its high end and the Kudos Blend is capable of delivering a very accurate impression of the guitar to which it is fitted. An issue for some guitarists, though, may be the fact that there is no onboard microphone blend control.

If you already own either of the DPA microphones then you’ll ultimately get a better overall sound with Option 2. However, if you’re starting from scratch, I think that you’d have to own a pretty special-sounding guitar to be able to justify spending the thick end of £800 on a Kudos/DPA combination.

Although more expensive than any of its direct competitors, I feel that its overall performance justifies that difference — especially for professional users. The Kudos pages on Mike Vanden’s web site (www.vanden.co.uk) list sound samples and professional customers that attest to its attractions. I can’t think of any reason why I wouldn’t want to fall under its spell.

Seymour Duncan’s SA6 Mag Mic and Fishman’s Rare Earth Blend are the primary contenders. Or you could fit a passive or active humbucker and add your own choice of microphone — the Sunrise, DiMarzio’s DP230 Angel, Shadow’s SH 145, LR Baggs’ M80 and M1, Seymour Duncan’s SA3XL and Fishman’s Rare Earth and Blackstack models spring to mind. There are microphone options available from the likes of K&K, GHS, Highlander, B-Band and MiniFlex, as well as the less conventional LR Baggs Lyric and Anthem bridgeplate-mounted microphones.

A professional-level magnetic soundhole pickup/microphone combination that is capable of producing results of the highest quality.