Rupert Neve’s processors now have plenty of admirers — and imitators. Does this one offer anything extra?

Swedish company Vintagedesign are the brainchild of Thomas ‘TK’ Kristiansson, a self-taught man who has been building and repairing audio equipment since the late ’70s. At just 18 years old he began honing his engineering skills by fixing amps and audio equipment at the local music store. By the early ’80s he was custom-making audio equipment and setting up local studios and when, around the year 2000, long-time friend and guitarist Mats ‘MP’ Persson (co-author of Roxette’s hit ‘Listen To Your Heart’) asked for some mic preamps for his studio, Thomas built a couple of units based on an old Neve design. There were fewer Neve-inspired products back then, and the demand for more units soon followed. Thus Vintagedesign was created. The company specialise in discrete Class-A and transformer-balanced preamps, compressors and EQs, but in 2008 a sister company was started to satisfy the growing demand for more affordable high-quality audio equipment — TK Audio produce an impressive set of IC-based audio processors, and the stereo compressor received a fine review in SOS January 2012 (http://sosm.ag/tkaudio-bc1mk2).

Vintagedesign’s first offering in a recently refreshed range is an analogue stereo compressor that’s based on the classic Neve 2254 and 2264 compressors from the late ’60s. The circuit design of the VDC is discrete. Each channel features a diode-bridge gain-reduction cell and three custom-made transformers by Carnhill, one of the companies that built and supplied transformers to Rupert Neve back in the day. Extensive research has gone into matching the performance of the transformers (which contribute to the sound of the compressor) with that of their predecessors from the ’60s and ’70s.

After the input transformer, the signal is attenuated about 34dB so as not to overload the diode-bridge gain cell. When the signal has been compressed, it’s amplified close to 54dB by a microphone transformer and two Class-A amplifiers, similar in design to those used in a Neve 1272 line amp. The 20 extra decibels are actually for the make-up gain: the Make-up knob on the front is actually an attenuator! Finally, the signal is sent through an output transformer. There are two user-selectable treble filters in the signal path: the HF filter is applied to both the side-chain and the output signal, while the AIR filter is applied just to the compressed signal. To make the compressor less sensitive to low-end, there’s an adjustable 75 to 250 Hz high-pass filter on the side-chain. The compressor is powered by a linear power supply to keep noise and hum to a minimum.

The front panel oozes a sense of confidence, with its vintage style and stepped controls — all I miss is the smell of Bakelite! The controls are what you’d expect of a stereo compressor, namely threshold, ratio, attack, release, high-pass filter, make-up gain and bypass. In addition, there are two buttons for the treble filters and a mix knob for setting the ratio between a dry and compressed signal.

The best way to describe what this processor is like is to take you through my impressions of it on a number of different sources.

Drums: When trying a new compressor, I always start with drums, and the VDC didn’t let me down. Running a few different kits and loops through the compressor, the sound was beefed up in a nice way. Due to the transformers, the low-end earns some extra heft and the high-end is nicely rounded, making pokey transients more bearable. Even though it’s not a VCA or FET compressor, it still offers a fast ’bite’. During heavy compression the two filters come in handy, the HF filter brings back some of the treble that might get lost during compression, and the AIR filter has a vitalising effect, adding both upper mid-range and treble. For subtle beefing-up of drum kits, snares and so forth, the blend control is handy; it can be used to add stability without changing the sound too much. This wouldn’t by my first choice for drum compression, but it’s competent for the task — certainly if the goal is to fatten the drums in a non-aggressive way. The VU-style gain-reduction meter is fast and accurate, and a great help in keeping track of what you’re doing.

The bare essentials: balanced analogue audio I/O and a power inlet.Acoustic Guitar: Applied to a stereo mix of two acoustic guitars, the VDC compressor did a splendid job. The soft distortion characteristic of the diode-bridge gain cell lent a nice intensity to the transients when medium compression was applied. The VDC was also able to lift the energy of the acoustic guitars in a gratifying way. During heavy compression, the HF filter could bring back some lost treble and the AIR filter served to reshape the guitars somewhat. Speaking of filters, the high-pass filter was also useful here; when raised to 150 or 250 Hz, more body is let through the compressor, especially during heavy compression. Again the slightly warming affect of the compressor had a nice impact on the guitar sound.

Sometimes, acoustic guitars just need to be a bit more controlled but without really sounding compressed, and the two auto-release modes are useful for this. The first mode has an auto-release between 100ms and 2s, and the second between 50ms and 5s, depending on the signal. Auto-release functions usually aren’t fast, making them more forgiving but less versatile. In the VDC, though, they can, with ease, handle acoustic guitars that go from strumming to plucking. I like the way this compressor handles the transients without pushing back acoustic guitars too much in the mix, and the blend control is a good way to add just a bit of weight without affecting the tone too much.

Vocals: A good vocal compressor is either coloured, adding nerve and punch, or super transparent, just riding the gain and evening out the levels without making an imprint of its own. The VDC is definitely a colouring compressor, and it can add a nice punch to vocals when driven the right way. It handles both male and female vocals with ease, and watching the gain reduction meters it’s hard to accept how much compression is really taking place. Set to a low ratio and auto release, it creates a smooth compression adding a bit of warmth without altering the vocal performance too much. But personally I love how it sounds at higher ratios and deeper compression, because then it produces a rather nice, soft punch that adds weight and attitude. 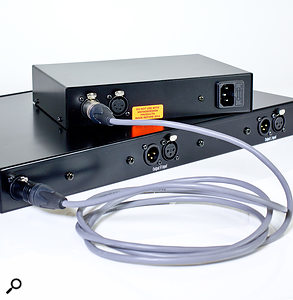 The stand-alone power unit can be used to supply two VDCs.Raising the high-pass filter to 150 or 250 Hz enhances the chest tonality of male vocals in a very nice way. As a vocal compressor the VDC really won’t do anything bad; pushed too hard you will end up with an obviously compressed sound, but it will still sound good. The threshold, though, feels like it’s set a bit too high — even set to the lowest value, the compressor needs quite a hot signal to be able to perform heavy compression, especially at low ratios.

Bass: A good bass compressor will not only keep the bass notes at bay but also help to highlight the upper bass range and introduce some mid-range nerve — simply adding a tasteful dose of distortion. The VDC compressor creates a defined bass with full control and sonic accuracy all the way down in the low-end. The definition in the mid-range becomes slightly sharper without sounding pokey, allowing the bass guitar to sit nicely in the mix. All in all it’s a very good bass compressor.

Mix Compression: Even if the compressor adds a bit of weight and soft distortion to the sound, it’s still transparent enough to be used on the mix bus — as long as the coloration suits the music. The stereo panorama and mid-range depth is well preserved for a compressor of this design. With all the gain stages inside the compressor and compression engaged, the signal-to-noise measures 84dB, which is low enough for most music. There’s always the possibility to use the Blend knob to add just the right amount of compression — adding energy to the mix — without affecting the transients too much.

The Vintagedesign VDC is built on a well-proven design and great measures have been taken to match the performance of the Carnhill transformers with the sound of their ancestors from the ’60s. It succeeds in introducing a tasteful dose of distortion that adds a pleasing nerve to the sound, and the transformers add a bit of body. It sounds really good on drums, bass and vocals — instruments that often sound better with a bit of added distortion — but it also lends itself well to more delicate instruments by providing smooth compression, and the feedback design of the compressor makes it sound musical.

The price tag is high enough to put the VDC out of reach for most home recordists, but it should be interesting to music producers who wish to extend their arsenal of analogue compressors. Compared with other Neve-inspired compressors, it has extended attack and release ranges, making it more versatile. The side-chain filtering does so too. The two treble filters can bring back some of the ‘air’ that’s lost during heavy compression or vitalise a somewhat dull recording in a nice way.

In short, it’s very nice. How nice? Well, if I didn’t already own a Vintagedesign compressor, the VDC wouldn’t have left my control room after this review!

Why not find out for yourself if the VDC compressor measures up to your expectations? The sound clips can be found on the SOS web site.

The Vintagedesign VDC compressor is a fine take on an old Neve design, and it adds warmth and soft saturation without colouring the sound too much. The attack and release settings and side-chain filtering makes it more versatile than its competitors. A great build, but with a price tag to match.