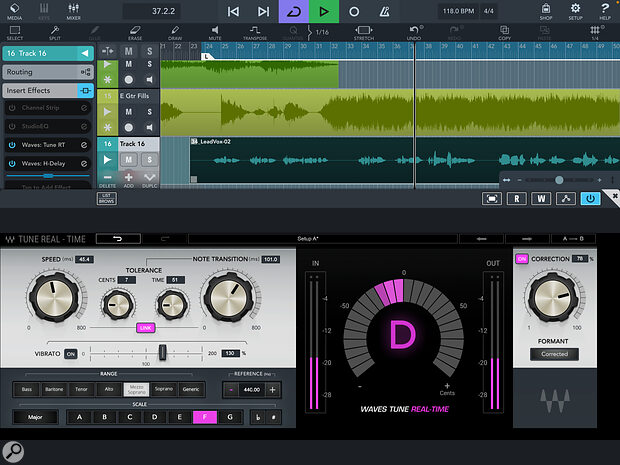 If you want a conventional DAW/sequencer experience on your mobile device, Cubasis is difficult to look beyond. Paralleling the improved performance of the iPad over the years, Steinberg have continued to add to the feature set and v3 is a seriously capable recording platform. Steinberg took a bold step in releasing Cubasis for Android last year, but development continues with v3.2. While some of the more exciting additions are iOS only, there are cool new features across the board. So, aside from the usual round of minor polish and fixes, what are the headline additions?

It’s commendable that Steinberg are into the mobile music‑making market for the long haul.

Both iOS and Android now get keyboard and mouse support. This might seem like a somewhat odd addition given that one of the key mobile UI benefits is touch control, but keyboard shortcuts can be an absolute boon and there are certainly some editing tasks that are much easier with a mouse than with a stubby finger. You now have that choice and, on my iPad Pro at least, it works a treat. It’s another interesting step towards unifying the workflow experience between desktop and tablet.

Waves H‑Delay is now also available for Cubasis as part of the Waves plug‑in bundle IAP.

For iOS users, the other obvious highlight is a further collaboration between Steinberg and Waves. This adds the excellent H‑Delay plug‑in to the existing Waves plug‑in IAP (making four plug‑ins in total alongside the L1 Ultramaximiser, Q10 Equalizer and Audiotrack (compressor, EQ and gate in a single plug‑in). Existing owners of this IAP get H‑Delay added for free while new users can buy the bundle for £19.99$19.99. Even if you pick the right sale, the desktop version of H‑Delay is around the £30$30 mark; the bundle therefore represents good value, and the iOS implementation of H‑Delay appears identical to the desktop version.

iOS users also get a new Waves IAP Plug‑in option: Tune Real‑Time. Mobile music makers have waited a pretty long time for one of the serious desktop pitch‑correction plug‑ins to make it over to iOS, but that wait now looks like it’s over...

That’s not all, though; iOS users also get a new Waves IAP Plug‑in option: Tune Real‑Time [shown in the opening screenshot]. Mobile music makers have waited a pretty long time for one of the serious desktop pitch‑correction plug‑ins to make it over to iOS, but that wait now looks like it’s over and, at a remarkable £4.99$4.99, this is a steal in anyone’s book. OK, so Waves Tune Real‑Time doesn’t quite go as far as desktop pitch‑correction giants like Auto‑Tune or Melodyne, but it is seriously good. As far as I can see, the only feature missing from its desktop parent is the virtual keyboard display so you cannot, for example, create custom scales. However, low latency means you can use it in real time and the controls allow you to go from super‑subtle fine‑tuning through to classic (er, clichéd!) robotic step‑based pitch effects with ease. As a Cubase user, it would be great to see VariAudio make the transition to the Cubasis feature set but, in the meantime, this is a fabulous addition.Further enhancements for iOS users include improved handling of AU instruments and plug‑ins and better support for multicore hardware. Personally, I’ve always found Cubasis to be a smooth user experience, but users of older hardware will welcome being able to squeeze a little more from their device, while owners of more recent iPads ought to see some clear performance benefits.

It’s commendable that Steinberg are into the mobile music‑making market for the long haul. Twenty‑five‑plus years ago, those dipping their toes into the world of multitrack recording did it on a four‑track cassette system; now they are doing it on their phones and tablets. It’s difficult to deny that — on iOS at least — Cubasis would represent a heck of a place to start, nor that it’s powerful enough to let you produce some very sophisticated recordings. The best just got better; Cubasis 3.2 is a free upgrade to existing Cubase 3 users and the new Waves plug‑ins are well worth adding.