We check out TK’s latest intriguing interpretation of the humble VCA compressor.

One of the things that has consistently impressed me about TK Audio’s growing range of outboard gear — aside from the appealing sound and decent technical performance — is that designer Thomas Kristiansson doesn’t seem content simply to clone famous designs but seems always to be looking for a way to create something that’s just a little bit different. This recent addition to his product range is a case in point.

At heart, the T‑Komp is a VCA compressor. Normally, on seeing those two words I’m already thinking, “Oh, another SSL clone?” But this is nothing like the profusion of SSL‑derived stereo compressors that jostle for your attention in today’s marketplace. It’s a dual‑mono design, with a separate set of controls for each channel, and that control set is much simpler than on the SSL design too. More importantly, its behaviour is very different, in that the ratio varies with the signal level. In other words, the greater the signal level you throw at it, the more assertive this compressor becomes. In practical terms, that results in a smooth‑sounding, forgiving gain‑reduction behaviour that, subjectively, has more in common with variable‑mu compressors than the SSL. But the T‑Komp has another couple of strings to its bow, not least that the range of this variable ratio can be switched, to make it better suited for use on different types of material.

The front panel of this 1U 19‑inch rackmount device has four main control knobs for each channel, the first three being pots and the fourth a rotary switch. The left‑most one, with its 41 steps making recall and channel matching easy, sets the threshold at which gain reduction starts to be applied. The next applies up to 20dB of make‑up gain, and the third, again with 41 stepped positions, is a dry‑wet blend control that makes dialling in simple parallel compression convenient. These three knobs are marked with a (somewhat arbitrary) 0‑10 scale and it’s easy to see at a glance the current settings. The final knob, labelled simply Timing, is a five‑way switch that selects one of five time‑constant combinations: 1 is the fastest (1ms attack, 40ms release) and 4 the slowest, with its timings loosely based on the old dbx 160VU (attack 25ms, release 1s), while timings on the fifth setting are programme‑dependent. 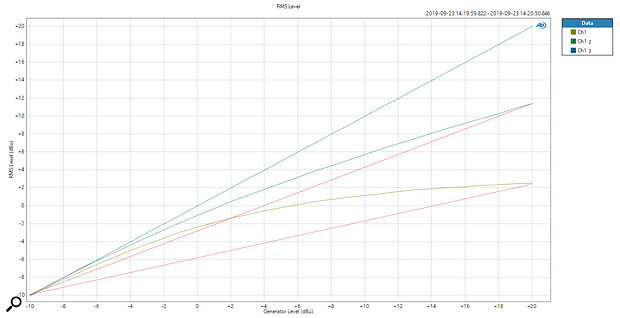 A quartet of buttons nestles between these knobs and a white‑on‑black gain‑reduction meter, which is adorned with TK’s logo. Starting from top right and going clockwise, these buttons: engage/bypass the compression; switch the variable ratio between its two ranges (nominally labelled 2:1 and 20:1, these are soft knees that range from 1:1 to those ratios); engage a gentle, 6dB/octave 150Hz side‑chain high‑pass filter; and toggle between feedforward (think modern, punchy) and feedback (more relaxed, vintage‑style) compression. A metal toggle switch between the two channels’ controls links them for stereo operation. This sums the side‑chain control voltages and the lowest‑set of the two channels’ threshold knobs takes priority.

The rear panel, with the usual XLR analogue I/O and IEC power inlet.

On the rear are two pairs of XLRs for the electronically balanced analogue inputs (THAT 1256 line receiver) and outputs (THAT 1646 line driver), and an IEC mains power inlet with external fuse holder. Inside the unit are four neatly laid‑out PCBs with a combination of through‑hole and surface‑mount components: one board for each channel, one for the I/O connectors and another for the power circuit, and they’re all linked with ribbon cables. The last of these boards has a toroidal power transformer with associated 115/230 V primary selector switch that steps the mains supply down to 18V AC, and from this output are derived the compressor’s ±17V power rails. Each channel’s front‑panel controls, other than the stereo‑link switch, connect directly to its compressor PCB, and a vertically mounted daughterboard on each hosts the channel’s gain‑reduction meter.

Unusually for a recent design, the gain reduction is performed by a THAT 4301 IC. Thomas Kristiansson tells me that he’d had the idea of creating a VCA compressor with an ‘automatic ratio’ for a number of years so, on realising that he had both a good stock of this chip and some time available in which to experiment, he took the opportunity to design such a device. The first T‑Komps sold out quickly, only for him to discover that the original chip was now obsolete. But fortunately he found an SMD version of the chip, and accommodated it in this tweaked design, which is available both in this rackmount format and as a mono 500‑series device. The latter is a little more affordable per channel, though it lacks the side‑chain filter and feedforward modes (and, of course, you must budget for a 500‑series rack). 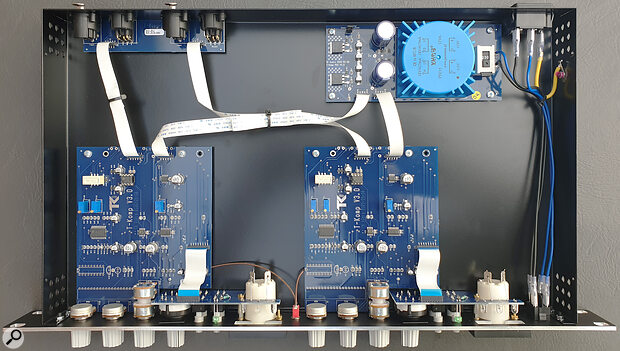 Inside the T‑Komp. The largest SMD chip on each of the two channel cards is the THAT 4301 which lies at the heart of the unit’s gain reduction.

Having used the T‑Komp for a couple of months, I’ve enjoyed it very much. It’s subjectively good‑sounding and really easy to use. What I’ve liked most is the generally forgiving character of the variable‑ratio compression: a soft knee is not a new thing but the switchable ratio ranges make the T‑Komp so quick and easy to set up yet so versatile. Adding in the feedback/feedforward option and wet/dry blend control extends that versatility further.

In feedback mode and in the 20:1 ratio range, the T‑Komp makes a lovely tracking compressor. Generally, though, when used with the time constants at 2‑4 or automatic, it’s a really musical‑sounding and forgiving processor on all sort of sources, including vocals and guitars. The longest time constants also took me, as claimed, into dbx 160‑ish territory, with transients and note onsets slipping through before the compressor clamps down on the body of the sound.

A soft knee is not a new thing, but the switchable ratio ranges make the T‑Komp so versatile.

I also found the T‑Komp rather tasty as a parallel drum bus compressor in this 20:1 mode: by selecting one of the fastest two attack/release combos, I could really pin down the transients, then set the blend knob to ‘dry’ before bringing the wet signal up to taste, juggling the blend and make‑up gain knobs, to raise lower‑level details.

Occasionally, though rarely, I wished for separate control of the attack and release, particularly for some individual drum mics. That said, the timing presets have been well judged, and you can set the time constants to operate anywhere from lazy to limiting. Also, switching to feedforward mode gives access to a whole other palette, with the compressor seeming to act faster and more aggressively.

Note that, if you want, you can also configure one channel as a compressor and the other as a limiter, with one feeding into the other to create a two‑stage mono compressor‑limiter; I coaxed some lovely sounds out of a bass guitar that way.

Switching to the 2:1 ratio range turns the T‑Komp into a different creature. The knobs give you a much finer degree of control in this mode, and it makes the T‑Komp much more useful in a group‑ or stereo‑bus ‘glue’ compression role.

What’s not to like? The side‑chain high‑pass filter reduces sensitivity to low frequencies, helping it to sound less pumpy and more effortless, but I’d personally prefer to see more control — either a variable frequency option, or switchable side‑chain responses, as on, say, an API compressor. Being picky, I’d also like to be able to switch the meter to display input/output level, not just gain reduction. But those are really very minor points.

The bottom line is that this is a decent‑sounding, very forgiving and surprisingly versatile compressor. I might not swap out a nice vari‑mu for the T‑Komp, but it can have that same easy‑going attitude: after tweaking while listening intently I was often surprised to see on the meter just how much gain reduction is being applied. The automatic ratio works really well and having the two switchable ratio ranges is a great idea and surprisingly effective. The feedback/feedforward modes and wet/dry blend controls are welcome options too, the former allowing it to sound much more upfront and urgent.

If you can afford to dedicate a bunch of outboard compressors to specific sources, this might not be the next one to add to the collection, but if you want a high‑quality, good‑sounding workhorse that can earn its keep in a range of tracking and mixing applications, it should see a lot of service. It’s certainly well worth auditioning if you have the chance.

An intriguing take on the VCA compressor, which is both easy to use and impressively versatile.