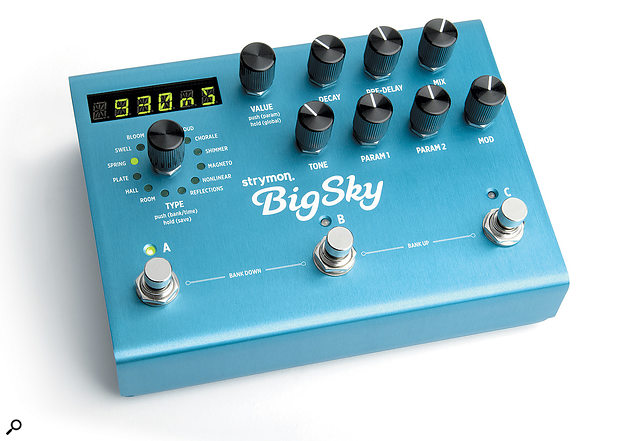 Reverb, typically placed last in a pedal effects chain, often comes bottom of the list of priorities when setting up a guitar rig — and in many cases doesn't make the cut at all! Of course, depending on the type of music being made, a dash of reverb from the amp may well be sufficient to meet a player's needs, but the splashy, retro charm of the spring reverb does have its limits, and anyone looking to create lush soundscapes and more controlled or extreme 'modern' sounds will need to seek out a dedicated device.

Broadly speaking, two types of reverb pedal exist: bread-and-butter stompboxes that aim to produce a sound good enough for gigs, and more expensive models that feature increased functionality, multiple presets (or patches) and, of course, studio-quality sonics. The Big Sky falls squarely in the latter bracket, and Strymon claim it offers "better audio quality than many rack reverb units”. And while it may appear to be a big brother to their highly regarded Blue Sky reverb, the newcomer was in fact designed from the ground up, with all-new algorithms.

Purists will be pleased to hear that the Big Sky features a choice of either true or buffered bypass, and should be ecstatic to learn that its dry signal path remains all-analogue, even when the effect is engaged. This, coupled with a saveable-per-patch dry/wet mix control, gives the unit an edge no other reverb pedal can currently match. So far, so good — but does the rest of the Big Sky reach such sunny heights?

The pedal comes in a nicely finished, anodised aluminium housing similar to that of their Timeline delay and Mobius modulation pedals (the Mobius was reviewed in SOS March 2013), with three footswitches, high-quality knobs and connectors, and a bright, though not huge, LED display. The box itself is sturdy but weighs less than 750g — a minor point perhaps, but a consideration for many a wandering minstrel with an already groaning pedalboard. The usual four jack sockets for stereo audio I/O, and a pair of MIDI connections are present, along with provision for an expression pedal which can be programmed to control any or all of the functions assigned to the knobs. There's no USB socket, or any other form of digital connectivity, however (more on this later).

Power is supplied by a 9V wall-wart, and users should take care not to lose it; the Big Sky has a healthy 300mA appetite, which means a typical Boss PSU will not suffice as a replacement. In fact, I'd suggest immediately labelling the PSU in clear writing, as the vital details of its voltage and impedance ratings are printed in ridiculously small type — a commonplace practice, and a particular bugbear of mine. The rear panel is completed by a guitar cab filter switch, which is intended to be turned off when connecting the Big Sky to a guitar amp and speaker, but engaged when sending direct to a PA or recording interface. Its speaker response curve mimics the effect of playing through a cab, and while it won't turn the pedal into an amp simulator (and isn't intended to do so), it does take the edge off a raw sound in a realistic and worthwhile manner.

Operationally, the Big Sky follows the paradigm established by other Strymon pedals: it's a one-sound-at-a-time machine, with each preset based on one of a dozen effect types — in this case, hall, plate, nonlinear and so on. Presets, edited or otherwise, can be saved to any of the 300 locations that are arranged in 100 banks, with A, B and C variations. Hit the centre and right switches simultaneously to bank up and the centre and left to bank down. The LED above a selected preset glows green and becomes amber once the preset has been edited. Hit a selected preset to activate bypass, and the LED turns off. Doh! This means all the LEDs are now off, so it's necessary to remember exactly which preset has just been bypassed should you wish to return to it — as if there isn't already enough to think about in the heat of a gig! A blinking LED would be a much better way to indicate a selected-but-bypassed preset, and I hope that Strymon will address this soon.

Major editing functions are served by dedicated knobs for decay time, pre-delay, mix, tone and modulation. Transitions are quick and smooth, with the tone and mod knobs both providing simple control within sensible ranges: even when fully clockwise the high end doesn't become harsh, and modulation of the reverb via its knob is kept tastefully subtle. Decay-time values are shown on the LED, but all other alterations need to be made by ear, with a knob's marking as the only visual aid. This imperfect situation is further undermined by the fact that a 50/50 dry/wet mix is achieved at the three o'clock position, something one wouldn't know without having had a good read through the manual.

Other functions can be found in a menu accessed by pressing the Value encoder: the list is mercifully short, with six parameters common to all presets, and between two and six unique parameters, depending on the reverb type. Handily, any two of these menu-accessed functions can be routed to the assignable knobs for quick front-panel access on a per-preset basis, enabling hardware control over the most frequently adjusted aspects of a patch. Overall, Strymon have kept the fiddly stuff to a minimum in order to appeal to musicians rather than engineers, yet there's never a sense of anything obvious or important missing. Sounds can be gently tweaked 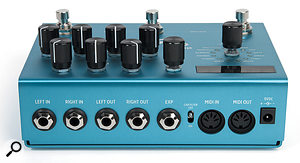 In addition to the anticipated analogue audio I/O, the Big Sky sports an expression pedal input, a cabinet emulation switch and MIDI I/O. or completely transformed, and the whole system takes minutes to learn and perhaps half an hour to master. Full marks for that.

Going through the 12 reverb types, all the usual suspects are present, and then some. Room, Hall, Plate and Spring acquit themselves superbly, with smooth realism and impressive degrees of lightness and density, and the claimed 'insanely powerful' SHARC processing and 115dB S/N ratio are entirely believable, as reverb tails fade to silence without degradation. As with other Strymon boxes, the intrinsic sound quality on offer makes the Big Sky a valid studio tool for use on all sorts of sources, including vocals.

The Swell and Bloom machines provide varying, and variable, degrees of fade-in to the reverb — much like using a volume pedal on the wet signal — and this can be reversed to fade in the dry signal for a pleasing, almost backwards pedal-steel effect. Cloud could perhaps be described as an ethereal, abstract reverb suitable for sound design, while Chorale adds in vowel-like "oooh” and "aaah” sounds. Thankfully, the virtual choristers' contribution is kept restrained, lending a tonal shape to the reverb rather than an overtly vocal texture. Restraint would not be the first word to come to mind when describing the nonlinear effects, whose three backwards shapes (Swoosh, Reverse and Ramp) can give some mind-bending results, especially when used in short bursts on drums or percussion.

Blurring the lines between delay and reverb, Magneto models a multi-head tape echo, with the pre-delay knob this time controlling feedback. The number of heads and their relative spacing can be adjusted, with even spacing giving, logically enough, a more pronounced rhythmic effect. Tempo can be dictated by use of a tap switch plugged into the expression pedal input, or by slaving to MIDI clock. Unfortunately, this feature had yet to be implemented on the unit submitted for review, but should feature on all production units.

Happily, no shortcomings plagued my experience of the Shimmer algorithm, which is so good it warrants the price of the unit on its own. Hit the Stardust preset for instant Cocteau Twins. The program's two pitch-shifters can be independently tuned to any interval, within an octave down/two octaves up range, and then interact and regenerate with the reverb. Back in the day, conjuring this Eno-esque mix was a tricky balancing act, involving pricey Lexicon and AMS units, half a dozen mixer channels and the risk of screeching feedback. But the Big Sky's Shimmer delivers it flawlessly at the touch of a button. It sounds better, too, with a more dynamic response, and a beautifully smooth, grit-free top end.

The Reflections machine brings us back to reality, allowing both left/right and front/back placement of a source signal within a stereo reverb space. As such, it's much more useful in the studio than as a live tool — its spatial subtleties would be lost in a concert environment. The inclusion of this Reflections algorithm — and the superb audio quality available overall — suggests Strymon may have missed a trick by not including USB audio 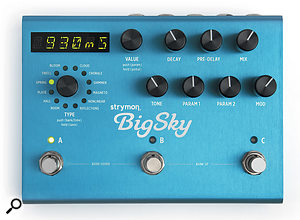 to encourage the Big Sky's use in recording, mixing and post-production. The thing is crying out to be used in a studio, but as it stands, a fully wired device necessitates a clutter of no less than seven leads (eight with an expression pedal), plus a USB-to-MIDI converter to load updates, and awkward workarounds for integrating with a DAW. In fairness though, inclusion of USB audio would have driven up the cost of a device that's already not cheap, and Strymon's core followers are musicians first, recordists second.

So, returning to the Big Sky's primary function as a guitar pedal, it's worth mentioning that when switching patches or hitting bypass, the Spillover and Persist functions allow reverb tails to fade naturally, rather than end abruptly. Finally, the dual-mode Sustain function allows a reverb to continue indefinitely, activated by a simple press-and-hold of the current preset footswitch. Again, the choice of mode is configurable by preset, with Infinity adding newly played notes to the reverb, and Freeze ignoring new notes to allow noodling over a static background wash.

Overall, the Big Sky is something of a triumph, producing hyper-realistic rooms, ambient space trips and everything in between with ease and finesse. Its analogue dry path with programmable mix control is a world first in a reverb pedal, and could well be the USP to tip the balance in its favour for many prospective purchasers. Any guitarist looking for state-of-the-art reverb, whether for stage or studio use, would do well to reach for the Sky!

When appraising the Big Sky, comparisons with Eventide's Space (reviewed in SOS November 2011) are inevitable: both are highly capable devices with excellent sound quality, and similar prices and specifications. The Eventide set the bar high two years ago (and features the USB 2 connection absent from the Big Sky, and a larger display). However, Strymon have responded with sonics to satisfy tone-obsessed guitarists and golden-eared producers alike, and by making their system more user friendly — there isn't a single push-this-while-pressing-that operation in sight.

The Big Sky is a unique reverb pedal, offering studio-quality effects and some unique algorithms that justify its price tag.