I discovered this very handy software, created by the makers of AA Translator (SOS review in the pipeline), almost by accident after searching for a way of batch–interleaving pairs of mono WAV files. Why would you want to do that? There are a few scenarios. One is when presented with old Pro Tools session files that you want to import into another DAW, particularly if there are lots of edits on the tracks — as in this month’s Reaper workshop. Another is if you work with stand-alone recorders that record only to mono files.

This isn’t the only means of joining split–stereo files, but it’s the simplest and best that I’ve tried when you need to join many pairs of files. Pro Tools has a way to do it, but that requires a lot of manual input and that you rename the files to match the track name; when I tried Logic Pro’s in-built facility it only seemed to be able to re–join files that had previously been interleaved, and only with the right suffix; Cubase couldn’t do the job at all without laboriously bouncing out the result, and even Wavelab’s batch-processing facility wasn’t up to it. Reaper, as this month’s workshop shows, is more capable, and in some circumstances (particularly on those rare occasions in which you wish to combine files of different lengths), I’d be inclined to use the approach I described in that article. Of the dedicated utilities I found, AudioEase Barbabatch wasn’t successful in doing what I needed, and neither was Sound Devices’ Wave Agent. An old Windows application created by Rail Rogut seemed to have been designed for the task... but it failed to work on my Windows 7 64–bit system. 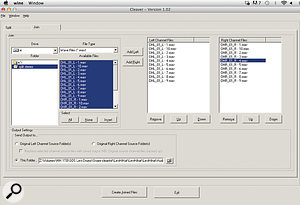 Cleaver, though, is perfect for the job. It’s a Windows–only application, but I installed and tested it on Mac OS 10.9.5 using the free Wine Bottler (http://winebottler.kronenberg.org) environment, in which it ran happily — though it was not able to read the Mac–format system drive (there may be a way to get Wine Bottler to access these but I settled for using a FAT32 external drive). The developers say they’re happy to assist Mac users who have problems getting Cleaver up and running in Wine Bottler.

The name of this application is no accident: the verb ‘cleave’ is an auto–antonym — it can be used to mean ‘to join’ or ‘to separate’ — and this utility can do either. It allows you to combine mono files as stereo interleaved ones, or to split stereo interleaved files to two independent mono ones. It allows you to join any two mono files to stereo, irrespective of filename, provided they’re the same length — and if there’s a mismatch between the length of the two files it will warn you. It also allows you to specify the suffix that’s added when splitting interleaved stereo files.

The interface may strike you as utilitarian but it’s none the worse for it, because it’s very intuitive to use; you just select whether you’re joining mono files or splitting stereo ones, load the files into the appropriate windows, select the target folder to write the new files, and decide whether the originals should be replaced (and backed up) or not, and tell Cleaver to do its thing. Job done.

After trying it, I contacted the developer to suggest a few small refinements — in particular to give you the option to choose which channel the new file takes its timestamp information from. He seemed keen to make the improvements and implemented them within a few days, which impressed me.

It’s worth stating that ‘donationware’ isn’t ‘free’. There’s no requirement to pay for a license, but the maker welcomes donations from those who use it — so if Cleaver helps you out of a hole, it’s well worth supporting! Matt Houghton