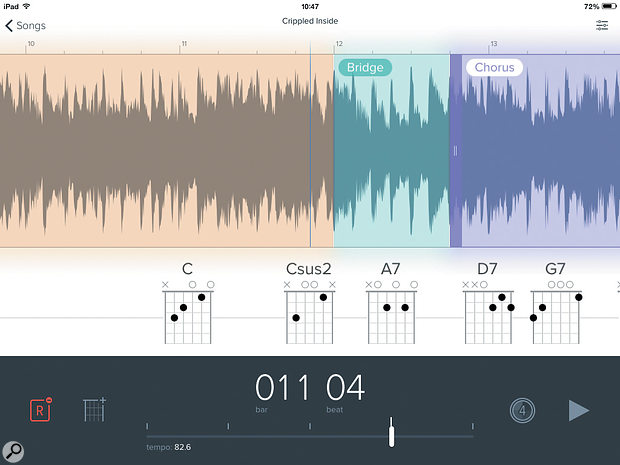 Capo Touch is the iOS version of SuperMegaUltraGroovy’s Capo 3 music analysis application for Macs. Capo accesses its host’s music library and analyses selected tracks, detecting key and tempo, and generating a set of chord suggestions. The processed track can be slowed to 25 percent or speeded up to 150 percent, without affecting pitch or, indeed, mangling the audio quality too badly. Pitch can be altered by plus-or-minus 12 semitones without changing its tempo, to help with learning parts in a different key.

Once a song is selected, the software displays ‘Building waveform’, ‘Calculating beat locations’, ‘Determining song key’, ‘Calculating chromagram’ and ‘Detecting chords’, with each process taking about 10 seconds for a four-minute track. The interface primarily consists of a zoomable waveform display that can be scrubbed back and forth under the stationary ‘play head’ with a normal swipe gesture. A suggested chord sequence appears below the waveform as chord blocks, and at the foot of the screen is a transport control strip with a bar and beat readout, a metronome on/off button and a slider for altering the speed of the track. Controls for altering the pitch are accessed by swiping the strip across to reveal an alternative strip that has a time counter and plus-or-minus 12 semitone adjuster.

Also on the control panel is a little fretboard icon that can be used to add or remove chords as well as shift them in time or find alternative suggestions. Perhaps most usefully of all for learning new material, a number of regions in the waveform can be defined, making them available for looped playback. These can also be named — Verse, Chorus, for example — to help you know where you are in the track. 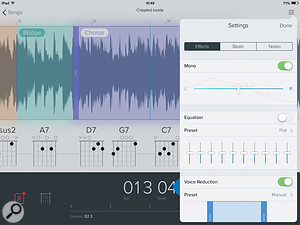 The Effects section contains EQ presets for isolating bass and mid-range. The remaining options are in the Settings pop-up: ‘Effects’ offers a 10-band graphic EQ with presets for isolating bass and mid-range, and a voice reduction tool; ‘Beats’ sets the time signature, the metronome and count-in; ‘Notes’ adapts the chord display for guitar, mandolin or bass and also allows for alternative tuning configurations and different capo positions. There is no Spectrogram — a key feature of the Mac version of Capo — and no facility to generate tab.

The beat detection works well with most conventional pop/rock songs, but being limited to a single time signature means there is no way of correctly displaying something with a change of time signature or even just the odd 2/4 bar or extra beat, which is a shame. Songs that drift in tempo seem to be averaged.

The chord suggestions can be somewhat variable, depending on the instrumentation being analysed. You have the option to change or move them, but it can still sometimes be quicker to just work them out by ear. With some tracks, however, it certainly provides a useful starting point.

Capo Touch is not perfect by any means, but if you are the kind of player who gets short-notice covers gigs with no charts, the looping and slow-playback functions alone would probably make this app seem like a worthwhile investment.