Polish speaker company Sveda might be new kids on the block, but their Dapo monitors can hang tough with the established competition.

While it’s easy to justify the need for countless flavours of microphones and signal processors on the grounds of different creative sound characters, the same argument doesn’t really hold water for monitor speakers. After all, a monitor speaker is supposed to allow the listener to monitor the quality of audio as accurately as possible — sound character really shouldn’t come into it, and if it does it can’t be called a monitor speaker. However, loudspeakers are inherently pretty flawed devices that contribute massively more unwanted distortion to the audio signal than any other element of the signal chain. Moreover, there are a great many compromises involved in the design of any monitor speaker, and different manufacturers take different approaches in the belief that their particular blend of compromises offers some worthwhile advantage over the techniques employed by others.

The latest manufacturer to enter the high-end monitor-speaker fray is a Polish company called Sveda Audio, who currently offer only one active monitor speaker design, plus an optional matching subwoofer. The monitor is called the Dapo, so named because it employs the ideas of a certain Joseph D’Appolito (see box) in the choice and positioning of the drive units. The Dapo is intended for near- and mid-field applications, and has an elegant form-factor intended for vertical orientation.

Arriving in two large shipping boxes, the Dapo monitors are not quite as substantial as the packing boxes suggested, but with dimensions of 220 x 600 x 500 mm (WHD), they can’t be described as compact, either! The form-factor is tall and deep, but with a fairly narrow front baffle carrying a central tweeter flanked by two bass/mid-range units. The review pair had a nice satin-black paint finish. 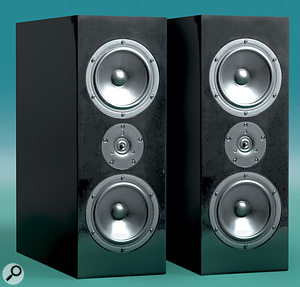 This is a two-way, three-driver design housed within a sealed (unported) cabinet built from MDF. The front baffle is 26mm thick while the rest of the cabinet panels are 22mm, and there are several internal bracing panels to control cabinet vibration. The total weight of each cabinet is a substantial 25.4kg. All three drivers are Scan-speak Discovery Series units. The tweeter (R2604/833000) is a dual-ring radiator type, complete with a waveguide centre-plug ‘nose’, while the two 6.5-inch mid-woofers (18W/8424G00) feature black coated-fibreglass cones and die-cast aluminium chassis.

Amplification is courtesy of three discrete 150W Class-AB amplifiers. In the review unit the two bass drivers were actually wired in parallel and the bass amps appeared to be configured in a bridged mode to deliver 240W to the two LF drivers. The marketing material for the speakers suggests that in this configuration the tweeter receives 80W. It also claims that the speaker connectors are all different sizes to avoid out-of-phase wiring or LF and HF connection errors; however, while the connectors can only fit one way around, the tweeter amplifier connector is identical in size and shape to the two LF connectors, so they could be cross-mated perfectly easily. Although the amplifiers contain full short-circuit, over-voltage and thermal protection, there is no protective audio-signal limiter circuitry. 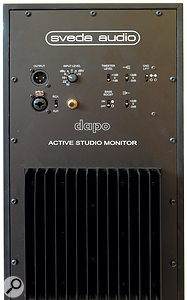 Controls for input sensitivity, tweeter level and bass boost adorn the Dapo’s rear panel, as do the expected audio inputs (in this case, an RCA and a jack/XLR ‘combi’ socket). A link output XLR and ground-lift switch are also present.The input circuitry, crossovers, amplifiers and power supply are mounted on a metal plate that extends over the entire rear panel of the speaker and carries a moderately sized finned heatsink. This entire chassis is housed in a separate sealed chamber at the back of the cabinet. The rear panel is clearly marked with the ‘box-within-a-box’ double-insulated symbol alongside the IEC mains inlet (which also incorporates a fuse-holder and on-off rocker switch). It is highly unusual for a powered monitor to be a double-insulated Class-II device — and, in fact, this one isn’t! It is a Class-1 device, since the metal rear panel is connected directly to the IEC mains inlet’s safety ground pin via a rather modest-diameter wire stretched tightly between the IEC socket and the audio input PCB, where it contacts the metal chassis through one of the PCB’s metal stand-off pillars. This is a rather inelegant and disingenuous arrangement, to say the least! A toggle switch determines whether the audio ground is connected directly to the mains safety ground or not, and when the ground is lifted the DC resistance between the two is around 10kΩ. The mains transformer is a custom-wound Lachowski torroid.

The marketing materials for the Dapo state that Sveda use high-calibre components, many being new-old-stock, apparently, such as the Siemens Styroflex capacitors employed in the crossovers, selected for their sound quality. I’m told that Sveda have sourced large quantities to supply the manufacture and maintenance of speakers for many years to come. The internal wiring between amplifiers and drivers is not as heavy a gauge as I was expecting, but uses silver-plated copper with Teflon isolation.

The electronics are housed on two printed circuit boards, one carrying the power supply and power amps, and the other the input and crossover sections. Both employ a combination of conventional and surface-mount components, the latter including high-current MELF resistors.

Looking at the rear panel, the input sensitivity can be set for nominal input levels of +30, +22, +15, +9, +4 or 0 dBu, and -3 or -10 dBV via a rotary switch. I found the +9dBu setting gave sensible listening levels with my monitor controllers. The balanced input is via a ‘combi’ XLR with paralleled XLR output, and an unbalanced input can be connected via an RCA/phono input socket. A recessed toggle switch selects between them. 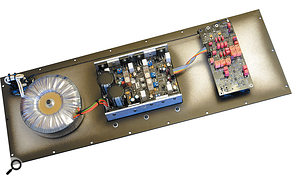 Removing the metal panel on the rear of the speaker reveals the input circuitry, crossovers, amplifiers and power supply.Some simple room EQ facilities are also provided. The tweeter level can be nudged up or down by 1dB via another recessed three-way toggle switch, and a bass-boost option can be switched on or off. In addition, high- and low-shelf equalisers are provided through two more toggle switches, this time offering ±2dB cut or boost.

Unfortunately, these monitors were shipped without a user handbook, and there is currently no option to download one from the company web site, which is, in any case, written entirely in the Polish language. Consequently, detailed specifications and operational information are rather thin on the ground. However, what I can tell you is that Sveda Audio’s published frequency response is flat (±1.25dB) between 46Hz and 20kHz, and the ±3dB limits extend that range to 40Hz — 40kHz. Pair matching is apparently to 0.25dB, which is commendable. The active crossover filters are fourth-order with 24dB per octave slopes.

I used the Dapo monitors on medium-height steel stands placed well away from side and back walls, but alongside my reference PMC IB1s with the tweeters roughly level with each other. I found I preferred the sound with the tweeter in the -1dB position, but that is a reflection of the acoustic conditions in my listening room, rather than the balance of the monitor.

Overall, I’d say the balance is a little mid-forward — which is common amongst monitors as it bestows an impression of greater detail and resolution — but not unduly so. It is certainly very revealing, allowing the listener to hear well into the inner detail of a mix, and allowing sources to be heard in space, separate from any associated reverbs. The Dapo monitors aren’t at all fatiguing to listen to over extended periods, and I found them to be both revealing and neutral, with mixes translating very well onto other monitors. The bottom end is very tight and fast, but also well extended thanks to the relatively large sealed cabinets (these have a more gentle roll-off than ported designs). Consequently, although the -3dB response is quoted as 46Hz, the Dapo is still producing useful audio signals well below that. It managed to reproduce the 32Hz tone in a stepped bass-note test sequence most impressively, and without any hint of resonant ‘overhang’ and minimal distortion harmonics. Bass transients are very clean and clear, and differentiating between kick drum and bass guitar EQ and balance settings was delightfully simple and obvious — one of the major benefits of sealed-cabinet designs in general.

Stereo imaging proved very stable and precise, largely thanks to the narrow front baffle, with an excellent sense of width and depth. Panning and positioning sources was always easy and clear, even in complex mixes.

Listening to a wide range of commercial material as well as my own recordings, the Dapo revealed most recording flaws clearly, but without rendering the music unlistenable, and they proved equally competent with all musical genres, from orchestral and choral, through to R&B, pop, electronica and spoken word — the latter being impressively free of colorations and confirming the Dapo as a true monitor speaker genuinely worthy of that title.

The absence of a user handbook, the non-English web site, the dubious double-insulated panel markings, and the rather inappropriate internal safety earth wiring aside, the Dapo is a genuinely impressive monitor speaker which is well worth an audition alongside the more familiar monitors in a similar price range.

There are many similarly priced alternatives worthy of consideration, but few with the same extended bandwidth or time-domain precision. Options include the Quested V2108, Adam S3XH, and Eve Audio SC407s. At a slightly lower cost, the PSI Audio A17M, Neumann KH310 (sealed cabinet), Geithain RL906, and Focal Twin 6 BE (ported, but with excellent time-domain performance) are also worthy contenders. 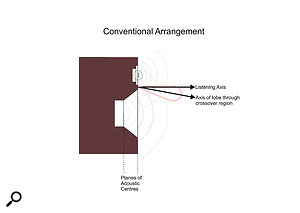 The ‘D’Appolito Configuration’ is the design of a certain Joseph A D’Appolito, and was first introduced at an AES conference in 1983 as a solution to the issue that afflicts many conventional multi-way loudspeakers. In most two-way mid/bass-tweeter designs, for example, the two drivers are not physically time-aligned because the tweeter’s acoustic centre typically lies well in front of that of the woofer. As a result, through the crossover region where both drivers are reproducing the same signal, their wavefronts will not reach an on-axis listening position at the same time, and the primary sound axis is tilted down, rather than perpendicular to the baffle. This can be corrected with a stepped or sloping front baffle, to physically time-align the drivers’ acoustic centres, or with compensating phase shifts in the crossover, but both are expensive and inconvenient to achieve. 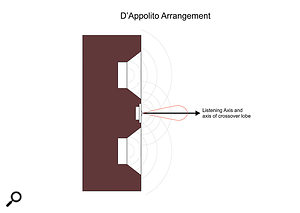 D’Appolito’s solution is to employ two bass/mid drivers, one on either side of the tweeter, with third-order (18dB/octave) crossover slopes. This arrangement is also known as a mid/bass-tweeter-mid/bass (MTM) configuration, and the symmetrical interaction between the wavefront from the two mid-bass drivers and tweeter results in a primary axis which is perpendicular to the baffle throughout the crossover region.

Of course, there is never a free lunch and, in addition to the cost of the additional mid/bass driver, the primary sound radiation lobe through the crossover region is significantly narrower than in the simple two-way design described above. Consequently, it is more important to listen directly on-axis as the balance will change noticeably through the crossover region if listening off-axis. Using relatively small bass/mid drivers and mounting them as closely as possible to the tweeter helps, as does introducing a 90-degree phase shift to the tweeter’s output (which is achieved by using a third-order Butterworth crossover filter response).

Another potential issue with the D’Appolito approach is phase cancellation between the two mid/bass drivers in the off-axis response, causing interference nulls at different angles, depending on the frequency and driver spacing. So, for all these reasons, it is important to listen on-axis to a D’Appolito design, and be aware that the off-axis response will potentially be more compromised than in simpler designs.