More than a mere DI, this latest Sansamp if a fully featured bass preamp

Tech 21’s venerable Bass Driver DI pedal has been a favourite of gigging and recording bass players around the world for over a decade, and has spawned a number of rackmount and programmable versions, as well as its ‘VT’ companions, along the way. The latest addition to this family is one of the most comprehensive yet, in the form of the all-analogue VT Bass DI pedal. The VT, of course, once again references Ampeg’s renowned SVT tube bass amp, partnered with four or eight 10-inch speakers. This pedal is set up to emulate that rig, but it can do rather more than just that.

Although housed in a footswitchable compact pedal format, this is a full-featured preamp that can be used to drive a power amp directly, or feed into the front of a normal bass rig as a ‘character’ effect, or indeed operate as the sole ‘voicing’ source for a direct PA or recording feed. The unit can be powered by a 9V battery, external DC supply or phantom power if the XLR output is used. 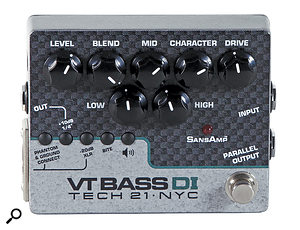 Balanced XLR and quarter-inch jack outputs operate simultaneously: the former able to be dropped by 20dB to feed a mic input, and the latter boosted by 10dB, perhaps to jack directly into an effects return on an amp, thereby bypassing its own preamp. A parallel output taken straight from the input gives you the option of a clean feed to a stage amp, with a processed DI feed to the PA, or for recording a clean DI alongside a processed one. A Blend control allows you to combine any proportion of clean and processed signals at the main outputs, which can either sound like a combined mic and DI signal, or parallel clean and distorted signals, depending on how extreme you get with the amp sim settings. Effectively, you have three modes available: footswitch on, to access the full range of amp simulation; footswitch off, to act as a clean DI; and footswitch on with Blend at minimum, which gives you a clean DI with active EQ, as the three tone controls will still function.

The Drive and Character controls work together to determine both the overall sensitivity and the amount of distortion — a very high Character setting soon gets to be ‘over-the-top’ distorted and biting; lower Character is darker and more vintage, with points in between offering varying degrees of tube-amp-like goodness, with peaks being rounded off into warm compression. Passive basses seem to like the Drive up a bit, while my actives generally needed it below halfway.

Engaging the Bite (presence boost) switch with the Character set midway takes cleaner (lower Drive setting) sounds into classic SVT ‘clank’ zone and high Drive tones almost into distortion-pedal territory. The latter can be tamed using the 3.2kHz High section of the on-board three-band active EQ, or you can just disengage Bite altogether and access a rather warmer, rounder palette of tones. Bite also seems to trim the very low end a little, which helps prevent distorted signals turning to mush, although cleaner sounds with Bite switched on, using the EQ to dial out excess top-end, also offer a useful palette of results. An independently switched, adjustable high-pass filter would be a really useful addition to an otherwise very complete set of controls. The speaker-emulation circuit can be disengaged, but certainly for DI’ing I preferred it always on, warming and smoothing the sound, compared with the drier, flatter bypass tone.

The VT Bass DI is undoubtedly a more complicated pedal to use than the BDDI — I’m referencing the BDDI rather than other versions of the VT simply because it’s so widely used that few players or engineers won’t know what it does. With the latter you can get a viable sound at any sensible knob settings, but the situation is almost the opposite with the VT Bass DI: given the new options and the range of the controls, you can easily make it sound aggressive and crunchy without really wanting to. But once you’ve worked out all the control interactions, there is a whole range of cleaner, warmer, more traditional bass sounds on tap, as well as its signature SVT sounds.

If you want plenty of versatility but don’t buy into the faux realism of digital modelling processors, and a straight DI is too unsatisfyingly plain for the bass sounds you are seeking, then the VT Bass DI just might be the perfect middle ground. Dave Lockwood