Tech 21's Hot Rod Plexi claims to replicate the classic tone and feel of a vintage Marshall amp in pedal form. Does it deliver, or is it really just another overdrive pedal?

"What's a 'Plexi'?”, some of you might be wondering to begin with, assuming you aren't a guitarist of a certain age and tonal disposition. Before Marshall amps acquired their iconic gold‑coloured aluminium control panels they had 'Plexiglass' (hard plastic) control panels. The amps of this earlier era (roughly 1965 to '69) might all, therefore, legitimately be referred to as 'Plexis' — except those years encompass a fertile period of change for Marshall during which the circuits evolved, the output‑tube type changed, and they went from tube to solid‑state rectifiers. In reality, only a few 'classic' models are considered to embody the archetypal 'Plexi' tone.

There is, though, quite a difference in the tone and feel of an early JTM45 equipped with two KT66s and a tube rectifier, and a later Plexi‑era amp loaded with EL34s and a solid‑state rectifier, the former sounding looser and warmer, compared to the latter's brighter, tighter and louder output. Tech 21's Hot Rod Plexi, a recent addition to their suit of all‑analogue compact pedals, has enough range to offer a bit of either flavour, to my ears, with the final outcome, of course, being significantly affected by the destination the pedal is feeding. Although the circuitry features some of the distortion-generating characteristics of the SansAmp, there is no speaker simulation, so the HRP is very much a pedal designed to be used in conjunction with a real amp or amp sim. 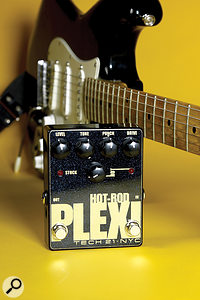 The compact, dual‑footswitch enclosure commendably offers no‑tools access for the 9V battery, and also has a standard DC input for use with an external PSU.

The control line-up is pretty standard, with Drive controlling gain and clipping, whilst Level sets the overall output, with a range from sub‑unity to 'way more than you'd need'. The Tone control adds nothing when wide open, and rolls off top progressively as you dial it back. The fourth control, in earlier incarnations of this pedal (available only through selected retailers), used to be 'Thump', which was a low‑frequency resonance effect that could be used to simulate the formant tone of a driven 4x12. The current version swaps this for Punch — a 500Hz mid-range control that scoops a bit when turned down and offers slightly more boosted mid-tones when turned up beyond halfway. I specify 'slightly more' because, whilst Punch dramatically affects the output level, it doesn't give you the audibly mid‑boosted sound of, say, a Tube Screamer‑type pedal. In fact, most overdrive pedals sound really small and nasal when A/B'ed with the Hot Rod Plexi. I make the comparison not to decry what most overdrive pedals do — what they do is often exactly what you want to complement an amp's natural characteristics — but to make it clear that the Hot Rod Plexi is doing something different. It is a more complete amplifier sound in itself and, just like a real non‑master volume Marshall, generates mainly musical, sweeter‑sounding even‑harmonic distortion until everything is turned up high. I am further persuaded of the circuit's authenticity by the fact that pedals that tend to work well in front of a real Marshall seem to work well with the Hot Rod Plexi, too.

The final control replicates the addition of an extra gain stage to the preamp; a modification that could be performed on the tremolo circuit of models so equipped to give them even more preamp drive. The footswitchable Hot option here has its own variable drive, but no independent level control. You can nevertheless make the signal more saturated without being significantly louder or, with up to 28dB on tap, use it to add both gain and level, which allows you the option of using the Hot stage as a solo boost to cut through the mix.

So, can an all‑analogue, solid‑state pedal really sound like a late-'60s classic tube design full of hot Mullards? I'd have to say it can. Whilst the partner amp's contribution is always significant, the Hot Rod Plexi is clearly doing more than your typical distortion pedal and is able to add a lot of classic Marshall flavour even to solid‑state amps and modellers, and at moderate volume too — it works a treat in front of Tech 21's own SansAmp Classic amp‑and‑speaker‑sim pedal as a complete DI solution. Whilst it is clearly at its best into an 'on‑the‑edge‑of‑break-up' tube amp, I reckon it would still get you out of trouble at a rock covers gig that had dumped a rental JC120 on you!

At sensible gain settings, there's very little self‑noise, allowing you to exploit a wide range of guitar volume settings for different tonalities — something to which this pedal is very responsive — whilst footswitching in and out, as well as between modes, is effectively silent, as it should be with electronic, rather than mechanical, switching. That the pedal has a buffered bypass may bother some but it certainly doesn't bother me — a well‑designed buffer like this one is completely benign.

The Hot Rod Plexi's ability to make a small combo (or even a DI processor) sound like a much bigger speaker system makes me think that there is a preset amount of the previous version's Thump speaker‑resonance circuit still in action. There's no loss of bottom end when you activate the pedal — if anything, a slight gain — but the distortion isn't at all loose or flubby, so the bottom end has to be being added later in the signal path. However it is done, it works, and I think it makes a major contribution to this sounding and feeling like an amp rather than a distortion pedal.

If you want vintage Marshall tones out of an amp or DI processor that simply can't do them, or you need to achieve them at a much more moderate volume than your amp will allow, Tech 21's Hot Rod Plexi pedal does exactly what it says on the tin, and I like it a lot.

There are other 'Marshall‑in‑a‑box' pedals (the genre even has its own widely used forum acronym: MIAB), but they tend to be still, fundamentally, just overdrive pedals. This is a far more complete replication and I would contend that it offers a level of detail and authenticity that cannot be directly compared.

If you are a Marshall lover and you've got a real Plexi and a venue that will let you turn it up, you probably don't need this. The rest of us probably do!