HearEQ is a very simple, low-cost app that enables musicians to turn the songs in their music library into ear-training tools. It is compatible with iOS 7 and above, although it has been optimised for the iPhone 5.

The first thing the app does is access your device's music library and asks you to select a song from the menu. Once this is done, the chosen composition appears at the top of the screen, ready to be analysed. 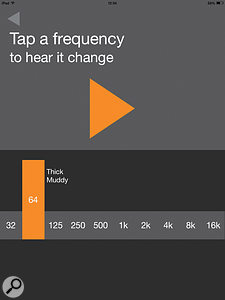 There are two modes of operation to HearEQ: one designed for training purposes, the other for testing what has been learnt. When the Learn mode is active the user is given a strip of 10 frequency bands to cut or boost. Each frequency is accompanied by some helpful descriptions. A 250Hz boost, for example, is accompanied by the words Warm and Boxy, whereas a 2kHz boost is described as Present and Nasal/Honky. It certainly helps to keep these descriptions in mind when performing the ear‑training tests later on.

The test itself comprises 10 exercises, and the ultimate aim is to score 10 out of 10. Shortly after playing commences the 'EQ: on' indicator turns orange to show that the filter has become active, and it is up to the user to tap on the frequency they think has changed, and to say whether it is being boosted or cut. Of course, boosting one frequency area reduces the relative impact of others, and can potentially be mistaken for a cut in a different band (and vice versa), so it is often necessary to toggle the EQ on and off to gain perspective on what the original track sounded like.

After some rather disappointing early results I found my scores quickly improved and was told by the app that I was 'getting better'! Relying on my iPad's speakers probably didn't help at first, so using some decent headphones is recommended, particularly if using the app on a phone, which is unlikely to deliver much. It's also true that mixes vary immensely, so it's important to make sure that the reference song library contains a variety of tracks.

HearEQ may be intended for ear training, but a side benefit is it provides an insight into how the energy of a song is distributed across the spectrum, and is therefore a useful tool for analysing commercial mixes. It is also very easy to use, and makes the experience of ear training enjoyable enough to seem like fun. In summary, HearEQ is a great educational tool and well worth its almost negligible price.