Compared with other DAWs, the implementation of track automation in Logic has some advantages that make it both visually pleasing and powerful for professional users. It’s yet another one of those things in life that’s ‘easy when you know how’. Once we’ve grappled with the basics, we’ll also check out some of the improvements made to the automation tools in Logic Pro X, such as the ease with which you can trim individual and multiple tracks. (Hint: read the last paragraph.)

Automation data in Logic is created on automation track lanes. It’s available for every parameter of every plug-in, as well as on volume, pan and aux send controls. Movement of faders, knobs, and switches can be recorded, edited and played back in your project with single-sample accuracy. When automation data is shown, audio waveforms and MIDI notes remain visible at a reduced contrast beneath it. The automation data is shown as coloured lines that connect dots known as nodes or breakpoints, which display numerical values.

To be able to view automation, click the Automation button in the main window toolbar or the key command Hide/Show Track Automation, which is assigned to the ‘A’ key by default. The track header will now display two menus: one selects the automation mode, and the other chooses which parameter to automate. These default to Read mode and Volume respectively. Click the second of these and, as previously mentioned, you’ll immediately see every parameter that you can automate from every plug-in on the track, as well as volume, pan and sends.

Another major convenience of Logic’s implementation of track automation is that you can view all the automation lanes on a track simultaneously. Simply click on the disclosure triangle on the lower left of the track header to view the next lane beneath, or Option-click to view all lanes of automation at once. This can be toggled by Option-clicking again, collapsing the view of automation sub-tracks. 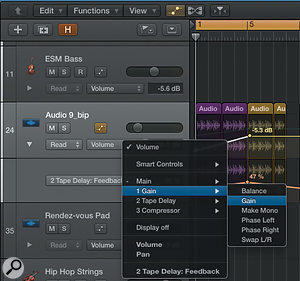 With the Automation button enabled on the toolbar (highlighted in yellow at the top), and the Enable Automation button selected on an individual track (see track 24), you can view all automation lanes and also access the parameter menu on the track header.

A new addition in Logic Pro X is a button to switch automation on and off on a per-track basis. This can be found next to the Mute, Solo and Record buttons, and looks like a line of automation with two nodes.

The automation mode determines whether automation is being written, read or ignored (off), and also how it is written. Logic’s automation modes will be familiar to the Pro Tools engineer as they are in essence the same: Off, Read, Touch, Latch and Write. Of these, Touch and especially Latch are the most popular ways to write automation in real time. They can be selected in the track header’s Automation Mode menu, or directly on a channel strip.

After selecting Touch, Latch or Write mode, you’re ready to automate by moving a fader or control on a selected layer of automation. Automation data will be written to the track regardless of whether Logic’s transport is in record or playback. You can also draw in automation with the Pointer or Pencil tool, creating automation nodes by clicking on or just next to an automation line. If tracks are grouped, nodes you add this way will be created on all tracks in the group — just make sure the tick boxes are selected in the Group Settings for volume, pan, sends, and so on. You can zoom in and edit the nodes on an individual track with exacting detail, then draw in new automation manually just by clicking with your Pointer or Pencil tool. To erase automation data, Ctrl-click on the track header to bring up the track menu, then select Delete All Automation. In Logic Pro 9, navigate to Track Automation / Delete all Automation on Selected Track.

Alternatively, switch to the Automation Select tool to select multiple nodes with a rubber-band motion, or select individual nodes. You’ll definitely want to experiment with this tool and decide whether you prefer using the Pointer or Pencil tool, key commands and the track Mix menu items, which are covered next. Here are a few techniques for working with the Automation Select tool:

Here’s another good one. With no nodes selected, Option-click anywhere in an automation lane with the Automation Select tool. This selects every node to the right of your cursor. Option-double-click in the same circumstances selects all automation data, which you can move forward and backward, up or down, independent of the audio or MIDI region. 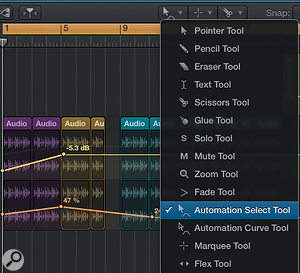 The Automation Select tool can be used to adjust automation nodes and data in a variety of ways.

In Logic Pro X there was a big reorganisation of the menus in the main window for creating, converting and moving automation data. The Mix menu has a few choices for deleting automation data, whether on an entire lane or layer of automation, a track or all tracks. If you find yourself doing these operations often, it’s worth assigning them to key commands.

Here are a few automation selection techniques to get familiar with. To create a node at each region border — useful for creating automation rides quickly on a particular area — do one of the following:

Here’s my personal favourite: marquee-select across any area of automation, then when you click back in with the Pointer tool, four nodes are created, so you can simply drag up or down to create rides. This is another fine reason why the Marquee tool should be your Command-click tool!

The Snap mode next to the Tools menu, at the top of the main window, snaps automation to the resolution set in the transport depending on the zoom level. The resolution is defined the same way as for other editing, allowing you to efficiently ‘snap’ automation to the timeline. If you like to do crazy bends, maybe play some cutoff wobbles and tweaks over a piece of existing MIDI, or experiment with sliders and knobs on an external controller, Snap Automation will help. Maybe you want to move automation later on the grid. Snap automation allows you to avoid the guesswork involved in selecting exactly one bar and sliding it over exactly one bar.

Here are some other techniques that you may find helpful when moving, copying and editing automation in Logic Pro X:

Automation Event List: You can perform edits at particular points on the timeline in an Event List specifically for automation data. The event list can be opened by key command. The default is Ctrl+Command+E. Automation events are displayed here as MIDI controller data, and their position and values can be adjusted precisely. 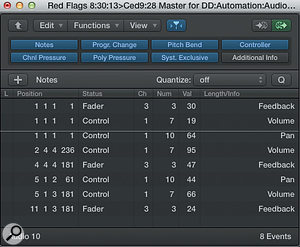 Trim Automation by Lane: This is big! Drag up or down on the numerical values on the Automation Parameter button on the right side of the track header to adjust the relative level of an entire lane of automation. Best of all, you can select grouped tracks to trim together. This works as long as the relevant boxes (Volume, Pan and Sends) are ticked in the Group Settings. Keep in mind that the automation data only graphically updates on the current track you are trimming when you release the mouse. This trim feature has been simplified and vastly expanded in Logic Pro X, and is a noteworthy improvement for pro users.Logic04