While modelling preamps and plug‑ins have come a long way, there are still many guitar players who are only ever happy when playing through the real thing, but valve amps designed for live performance often only sound at their best when cranked up to anti-socially high volumes. Even low‑power amplifiers of just a few watts that are designed for recording can be very loud. This is one of the reasons why US company Surprise Sound developed the Rock Block, which is a 1W, class-A valve guitar amp that's little larger than a typical effects pedal. 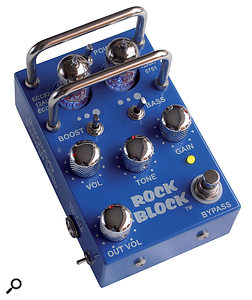 Despite its low power‑rating, the Rock Block delivers adequate volume for practising and recording (and can still produce up to 100dB SPL via an efficient 12‑inch speaker!), but it may also be used as a distortion preamp pedal, complete with bypass footswitching. The way in which the volume and boost controls are configured means that the Rock Block can provide any desired combination of preamp and power-amp distortion, and the whole circuit, including the output transformer, is still used when the Rock Block is operated as a pedal rather than being connected directly to a speaker.

To allow the user some tonal flexibility, the circuit can accommodate several different types of valve: the preamp valve can be an ECC83, a 12AX7 or a 5751; and the power amp valve an ECC82, an ECC802, a 12AU7 or an ECC99. Tube‑swapping seems to be encouraged: the designers say that changing the output tube type has a significant effect on the type of power-amp distortion produced, and it also affects the available power level, which ranges from 0.4W to just over 1W, with the 12AT7 delivering the brightest tonality. Premium JJ‑branded valves are fitted as standard, and these are guarded by two metal U‑handles, which form a protective cage. A purely cosmetic touch is a pair of blue LEDs below the valves that makes them appear to glow blue rather than red when the amp is on. High‑quality components are used throughout, and although power comes from the included external, universal mains-voltage 12V DC adaptor, an internal voltage-multiplier circuit generates a full 320V HT supply, plus a regulated 12 Volt DC heater supply. A lot of boutique thinking has clearly gone into the design of this little amp.

There are separate gain, volume and tone knobs, along with another volume knob that governs the output level when the unit is used to drive another amp in distortion‑pedal mode. The Rock Block also has three‑position boost and bass switches. When it's used as a pedal, an internal load is substituted for the speaker and there's also some EQ added to produce the correct pedal tonality. On the latest version of the Rock Block, a three‑way mini‑toggle voicing switch is fitted next to the 'Output to Amp' jack, and this is the only part of the construction that gives me cause for concern, as the switch is completely unprotected; a slide switch would have been less inviting of damage. This switch gives three differing tonalities when the Rock Block is used as a preamp, which could prove useful, although I found myself always going back to the middle setting.

My first test was to use the Rock Block as a preamp pedal for my Vox VT20 Plus amp, which has a modelling front end. I set the Vox to give a clean, neutral tone and then hooked up the Rock Block with the supplied ECC83 in the preamp and ECC802 in the power stage. Taking care to balance the bypass level with the processed sound, I started to explore the controls, but even at the cleaner settings, the sound was noticeably more lively and responsive than when my guitar was plugged directly into the Vox.

At higher gain settings, the minimum boost setting delivers a pleasing Vox‑like ring, with just a hint of dirt around the edges, and the Rock Block responds extremely well to picking intensity. The middle boost position gets you into classic blues territory, where the sound dirties up in a very satisfying way as you dig, while you can vary the maximum boost setting from blues to ZZ Top‑style grit and beyond by juggling the Gain and Volume controls. Bringing in the middle and rightmost bass settings adds more low‑end thump, again in a very authentic‑sounding way. What I like most about this little box, though, is that the character of the instrument always comes out on top, and it's so responsive that you always feel in full control of the overdrive.

Connecting the amp to a speaker gives predictably good results, but of course the character is influenced very much by the speaker. A 12-inch, for example, gives a nicely scaled‑down big-amp sound, whereas a five- or six-inch practice-amp speaker produces a thinner, more nasal timbre. Changing the power valve to an ECC99 gives a fatter tone, which could be useful with smaller speakers, when backing off the tone knob slightly and kicking in maximum bass boost also warms things up.

The Rock Block is apparently so popular that the manufacturers are back‑ordered, and it's easy to see why. It is an incredibly versatile little box, not least because changing the valves also changes the tonal character, but also because it can double as a valve overdrive unit. As a low‑power amp for recording, it works rather well, and for a player the Rock Block really does feel like a boutique amp in miniature. I was particularly impressed by the way it breathed new life into my small Vox combo.

Best of all, the Rock Block costs no more than some of the more exotic overdrive pedals, yet it offers so much more flexibility. Definitely worth the wait if you order one. Paul White