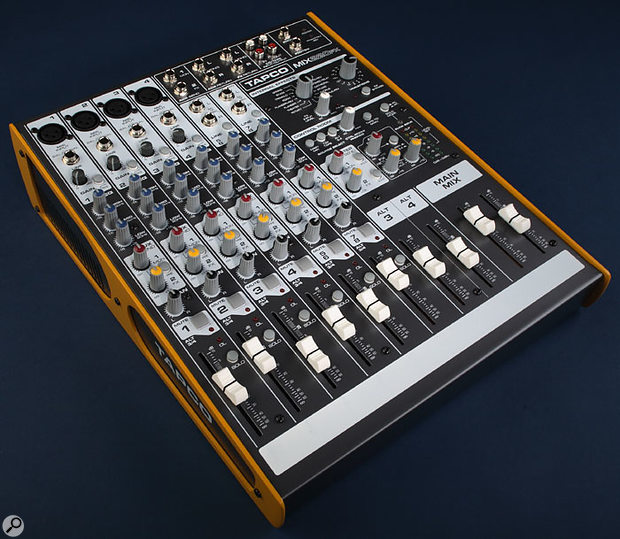 In today's computer-based recording studio, the large-format mixing console is becoming something of an endangered species, but there are still numerous situations in which a smaller mixer can earn its keep. It's often cheaper to buy a small mixer than to buy separate mic preamps, and a suitable small mixer also makes an excellent input-source selector and master monitor controller.

For those not yet in the know, Tapco is the name of Greg Mackie's original mixer company and has now been adopted as the name of a separate brand within the Loud Technologies group, to offer a cheaper alternative to their Mackie range. Tapco's Mix 220FX is designed to appeal to studio musicians and live performers looking for a low-cost, compact mixer with a flexible range of features.

The 220FX measures just 292 x 360 x 96 mm (WxHxD) and weighs in at 4kg. It offers four mic/line input channels with globally switchable phantom power, plus two line-only stereo input channels. In addition to these eight input channels, there are also two sets of stereo return jacks and a stereo CD/Tape input. Like some early Mackie mixers, the Mix 220FX has four output busses with a button on each channel to route the signal to either the main left and right outputs or the Alt 3/4 outputs. This button also doubles as a channel mute if you don't happen to need the Alt 3/4 outputs. One important factor here is that each of the four mic channels can be routed separately to each of the four mixer outputs simply by using the pan knobs and routing buttons, so if you need four mic feeds to drive a four-input, line-level audio interface, this will do the job nicely.

Another treat the mixer has in store is its built-in 20-bit digital multi-effects section. A 16-position rotary knob selects the effect, while a second knob chooses one of the 16 variations provided for each effect, giving a total of 256 presets. Many of these are sensibly chosen reverb and delay treatments. The rest provide modulation effects, including rotary-speaker emulation, chorus and flanging. There are also two banks of chorus-plus-reverb and chorus-plus-delay effects.

The Mix 200FX's master section features stereo CD/Tape inputs and outputs on RCA phonos with monitor-source switching, so you could record into a computer interface via the input section of the mixer and monitor back via the CD/Tape returns at the same time. As with almost all such mixers, you also get a decent headphone outlet so you can save yourself the cost of a separate headphone amplifier too.

To keep the cost down, the mixer is designed in the US but built in China and features a robust, all-metal case with bright yellow side panels that remind me of a Meccano construction kit! All the main outputs are on the rear panel. The main mix is on balanced XLRs, while the Alt 3/4 outs and control room outs are on quarter-inch jacks that can be used balanced or unbalanced, with a maximum output level of 22dBu. The sockets look durable, and power comes in via a proper mains lead rather than via an external mains adaptor. A switch-mode power supply automatically adapts to mains voltages from 100 to 250 Volts. The mains power and phantom power switches are also on the rear panel (with status LEDs on the top panel), while all other connectors are at the upper edge of the top panel. For use in high-risk areas, there's a slot on the rear panel that accepts a Kensington security chain. 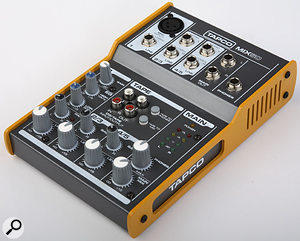 If your mixer requirements are more basic and you're on the lookout for something that's about the size and price of a small box of (admittedly very good quality) chocolates, the Tapco Mix 50 (around £45) might be what you need. This mixer runs from an external PSU and has just a single mic/line input, augmented by two further stereo line-only channels, making a total of five inputs in all. There are no aux sends and no internal effects, and a two-band EQ (80Hz and 12kHz) is provided on the mic/line channel only. The mic input has no phantom power and so is really suitable only for use with dynamic mics, capacitor mics that are powered by batteries (typically back-electret types) or tube mics with their own power supplies.

All three channels (one mono and two stereo) have pan and level knobs and the master section comprises one main output-level control plus one headphone level control feeding a quarter-inch stereo output jack. There are also stereo CD/Tape inputs and outputs on RCA connectors with 'tape to phones' and 'tape to mix' buttons, as well as a stereo, four-segment output-level meter.

While this may seem like a very basic feature set — even for a basic mixer — the Mix 50 could be useful as a small monitor level controller for active speakers, with the possibility of playing back CDs or MP3s via the RCA inputs. It could also be used as an input mixer for some solo live acts or duos. You could even hook it into a headphone amp in order to add a talkback mic, though without a latching talk button you have to be careful what you say! I tried out this little mixer in my studio and it sounds fine with a typical dynamic mic, so if you need quality but little in the way of quantity, it's a practical and very affordable option.

Each of the four mic/line channels has both balanced XLR and jack inputs with a rotary gain trim control and a switchable 75Hz low-cut filter. This may be a budget mixer, but the mic preamps have a very wide audio bandwidth, extending from 10Hz up to 200kHz (-3dB) with the gain trim at zero (this will inevitably be reduced as more gain is applied). The equivalent input noise is an impressive -129dBu (A-weighted) and both the crosstalk and distortion figures are sensibly low. These might not be esoteric preamps but they turn in a good, workmanlike performance.

The EQ on all channels is a fixed frequency, three-band system offering 15dB of boost or cut at 60Hz, 2.5kHz and 12kHz, and while there is no EQ bypass, the controls all have centre detents. Aux 1 may be switched pre- or post-fader for each channel while the post-fade Aux 2 feeds both the internal effects processor and the Aux Send 2 jack, in case you want to use an external effects device. Pan controls are located at the bottom of the channel strip, just above the 60mm fader, and there are Alt 3/4 and channel Solo buttons. The line-only channels have two jack inputs per channel, with individual +4dBu or-10dBV level selection buttons but no gain trims and no low-cut filters. 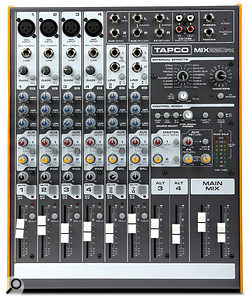 The Solo buttons solo channels over the control room and headphone outputs, but do not affect the main outputs. You can even choose AFL or PFL solo mode, which is unusual on such an economical mixer. AFL monitors the channel level after the channel fader, while PFL monitors the level prior to the fader and so is not affected by fader position. LEDs in each channel act as overload and routing indicators. The flashing 'Rude Solo' LED in the master section comes on when the Solo button is down, and solo'd levels are shown on the main eight-section LED meters.

In the master section, where you'll find the main and Alt 3/4 faders, are the two mono Aux Send jacks and two sets of stereo Aux Return jacks: send and return levels are controlled by knobs in the master section. Aux 1's return may also be routed to the main mix or the Alt 3/4 mix, while the Aux 2 return, normally fed to the on-board effects, can be mixed into the Aux 1 send for monitoring. The control room output and headphone output share the same level control and source-selection buttons, used to choose between the main mix, the two-track input and the Alt 3/4 output. Another button sends the tape input to the main mix, which is useful for using backing tracks live or for plugging in CD or MP3 players. Above the master controls is the effects section, with its two selector knobs and input-level control (with adjacent overload LED). The effects can be bypassed using a button in this section, or by connecting a footswitch to a jack at the top of the panel.

I've used this little mixer to drive a PA system at a pub gig and also in the studio. In both cases its audio quality was subjectively good, with very low noise and no nasty surprises.

The built-in effects are a definite plus point. I've been somewhat disappointed by the effects sections in some budget mixers, but here you have a choice of decent reverbs that are good enough to use for home recording as well as for live performance. There are some nice patches, including some plausible small room ambiences and plate reverbs. Also, the mixer's routing options mean that you can use the on-board effects to provide monitoring reverb for your vocalist without having to record it. You need to take care not to overdrive the effects section (watch the overload LED), but other than that it's as simple as it gets.

I particularly like the fact that Tapco give you proper control over control-room source switching and both send and return levels: not every manufacturer is so thoughtful. By way of performance, I think there's little to choose between this mixer and the standard Mackie mixers that preceded the VLZ Pro range, so it's capable of seriously good results when used properly. Of course, any fixed three-band EQ is a bit limited, but this one works well for adding some gentle high-end sheen or low-end warmth to tracks, while the mid band is useful for taking out harshness or honkiness.

If you need a few mic preamps, a monitor controller and headphone amp, then the Mix 220FX will fit the bill, with the added bonus that the on-board effects can be used while monitoring but are also good enough to work in a mix. The compact format of the mixer, combined with its main and alternate outputs, makes it suitable for live recording into a laptop equipped with a suitable audio interface, and for duos or small bands wanting a mixer to drive their PA system it should do a great job. There's no shortage of low-cost mixers vying for your money, but this model has a good pedigree and it's clear that a lot of thought went into its design.

Similarly-priced alternatives include the Alesis Multimix 12FX and the Behringer UB1202FX, both of which also feature onboard digital effects. If your budget will stretch a little further, the Soundcraft Spirit FX8 is worth a closer look. It's also a four-buss mixer, but it offers twice as many mic preamps and has built-in Lexicon digital effects.

The Mix 220FX has just the right feature set to attract both the home studio user wanting a mixer to double as a four-channel mic preamp and monitor controller, and the live performer needing a small mixer with integral effects.