Tascam's new handheld recorder boasts four-track recording capability, but is that enough to help it break through in a very competitive market? 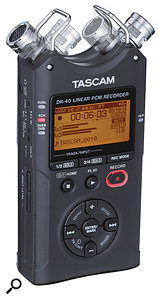 The DR40 is the latest in a long line of digital recorders designed to be small enough be carried in a pocket and held with one hand. It records to SD and SDHC cards of up to 32GB, allows 24-bit, 96kHz recording and has a pair of movable condenser microphone capsules mounted on its nose.

This particular recorder is large compared to some of the competition, but there is good reason for that: it features two locking XLR/jack combo sockets so that external microphones and other audio sources can be connected, and accommodates three AA batteries to deliver the 24 and 48 Volts of phantom power required by condenser microphones.

Like some of Tascam's older handheld recording products, the DR40 has both Overdub and Dual recording modes, the first enabling 'sound-on-sound'-style recording, the second simultaneously capturing a variable -6 to -12dB 'safe copy' recording to fall back on if the primary version is ruined by clipping. A new feature that the DR40 brings to the table is four-track recording, which is achieved by using the on-board condenser capsules in conjunction with external microphones or line-level instruments, plugged into the XLR and/or jack part of the combo sockets. It is this tracking ability that sets the DR40 apart from much of the competition at this price point.

Other hardware features worth highlighting include a headphone/line out, a mono speaker for auditioning newly recorded material, a screw thread for stand mounting and a socket for connecting the recorder to a computer via USB. A large, feature-packed display and a range of buttons on the upper surface allow the user to navigate menus and reach commonly used commands. 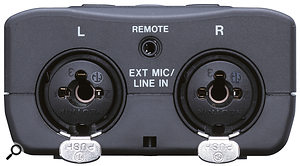 External mic and line inputs are via 'combi' XLR/jack sockets on the bottom.

The DR40 offers four distinct recording modes. The most basic and straightforward allows standard mono/stereo recording using either the on-board mics or the external inputs. Then there are the aforementioned Dual, Four-channel and Overdub modes, any of which can be quickly chosen by pressing the dedicated Rec Mode button situated below the screen, and then consulting the resulting displayed menu. Over on the left-hand side of the screen are three LEDs, each representing a mode, so it's easy to see at a glance which is active. Each mode has its own parameters — Four-channel has a delay, Overdub has Separate and Mix options and Dual can be set for Peak Reduction, Auto LVL or Limiter — but, in one way or another, all three exploit the same four recording channels.

Many of the bonus features found on recorders such as Tascam's own DR1 and DR2d have been carried over to the DR40. For example, the playback speed adjustment, with a range of -0.5 to +1.5 percent, makes a return appearance. The built-in reverb processor is not a new idea either, but has seen some modifications. As before, it can be applied to the input signals as well as playback recordings, but here it makes use of a mixer page — summoned by pressing a dedicated button — where adjustment to the effect's send, pan and level can be made.

Where the DR40 excels is in its provision of quick menus, which pop up to display important setup options just when you need them. If the Record button is armed, for example, a press of the key labelled 'Quick' brings up a Level control menu with four options.

A few controls, as well as the USB connection and SD card slot, are sited on the DR40's side panels.

The adjustable microphone capsules move as independently of one another as a cat's ears, but their polar patterns are cardioid, meaning that they are likely to provide the best results either spread outwards at 90 degrees to one another, providing a wide stereo soundfield, or facing in towards one another, in an X/Y configuration. The latter setup requires the capsules' left/right status to be reversed, and when the right-hand capsule is moved by a certain amount, a screen option to switch them pops up, which is a clever touch.

This isn't to say that the capsules can't both be angled to the left, for example, or used in any other configuration, but because they each pick up sound over a wide angle, they can't target a specific sound source while satisfactorily excluding another. It would be very hard, for example, to record a guitar-playing singer and capture their guitar with one mic and their vocal with the other. If, however, such a separation job was required, in Four-channel mode the on-board mics can be set in stereo X/Y formation and pointed towards the guitar, while a separate condenser, fed to one of the XLR inputs, is used to for vocals.

As mentioned earlier, the DR40 is not the smallest product of its kind, so to get a sense of its size I put it next to Tascam's old DR1, which isn't particularly small itself. In every dimension other than width, the DR40 is significantly larger than the DR1. That's not to say that it is too large to be held comfortably, for it is still light and small enough to cradle in the palm of one hand, but its owner would need a mitt like a gorilla to be able to wrap their fingers right the way around. In truth, though, this isn't necessarily a problem: this product is designed to be programmed in the hand and then set down, or mounted on a tripod, to do the business of recording.

Tascam have come up with quite a number of different stand ideas for their portable recorders over the years. This time they have equipped the DR40 with an inch-long rubber bar with feet at each end. This squeezes into the tripod's stand-hole and lifts the front end about a centimetre clear of the desktop. The 'tilt foot', as Tascam call it, helps angle the microphones towards the sound source and buffers desktop vibrations. To prevent it from getting lost between the floorboards when not in use, it has its own rather neat dock on the inside of the battery-compartment lid.

To assess audio performance relative to something similar, I adjusted the DR40 and my Olympus LS5 so that they had equivalent settings (the Olympus mics are fixed in a wide position), placed the recorders side by side and then simultaneously recorded the same source. I then compared the audio files in my DAW. The results were surprisingly similar, with both recorders exhibiting nearly the same noise level, and sounding equally convincing. If anything, Tascam's baby produced marginally better stereo imaging and sounded a little more laid-back and natural, while the Olympus did a bit better on the noise front — but both seemed to deal with the highs, lows and mid-range in pretty much the same fashion. Choosing between them on the basis of sound alone would be tough.

I've used more expensive recorders that had a slightly lower noise floor than the DR40, but at this price there's nothing to complain about. Any strategies Tascam have used to reduce handling noise, however, have not been so effective. It must be difficult to prevent vibrations reaching the mics on such a small device, but some recorders do minimise the problem better than Tascam have managed to here.

Establishing a USB connection is very fast and trouble free. General operation is also fast, but delightfully simple too, benefiting from what seems to be just the right number of dedicated buttons and short menu lists.

The four-channel mode, or '4-CH', as it's abbreviated, works well. Two buttons labelled 1/2 and 3/4 allow fast access to level adjustment and facilitate playback soloing, and a delay setting enables the user to compensate for placement discrepancies. Unfortunately, the tracks are configured as stereo pairs, so it's probably fair to say that the DR40 isn't quite a full-blown four-tracker. 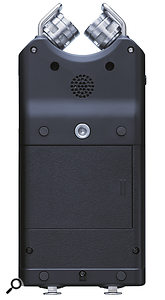 An audition speaker and tripod mount are located on the rear.Arguably, though, the best DR40 feature is the Overdub mode, when it's set to Separate rather than Mix. In Mix mode, the incoming recording is mixed with the guide track, but Separate mode saves the new part as a discrete file. By repeatedly recording along to the selected guide tracks, you can build up whole compositions ready for assembly in a DAW later on, simply because each pass is stored rather than being overwritten by the next.

Although the D40 is, first and foremost, a stand-alone stereo recording device, when it's fitted with external mics it performs four-track recording effortlessly. This feature does have its limitations: there's no way to connect four external sources, as the on-board mics have to be used; and you're limited to stereo configurations. Things could be much worse, though! I'd expected to find that the bit and sample rates reduced in Four-channel mode, or that there was some similarly crippling compromise, but, happily, I was proved wrong.

Tascam haven't been particularly generous with the extras: there was no foam windshield with the review model, to protect the mics when recording outdoors, and no free 'lite' DAW software to help beginners get started. The remote control has to be bought separately, too. But even taking all of that into account, the DR40 still seems to be priced right. It does exactly what it claims, without any hidden compromises, and performs very satisfactorily overall, so if it's not essential to you to have a recorder that's small enough to comfortably carry around in a shirt pocket, the DR40 is well worth considering.

If the DR40's features seem familiar, that's because it competes directly with Zoom's slightly more expensive H4n. Like the DR40, the Zoom offers XLR sockets, sound-on-sound recording and a pair of adjustable microphones. It also allows four-track recording and mixing. The H4n has more bonus features, but whether or not these are deal-makers depends very much on whether you're likely to use them. As we were going to press, Olympus announced their LS100 which will offer multitrack functionality — but it's nearly twice the price of the DR40.

The DR40 is a well-featured, solid performer as a stereo handheld recorder, but to that it adds useful overdubbing and simultaneous four-track recording capabilities. For those who don't need the tiniest of portable recorders and are on a budget, the DR40 is a decent choice.