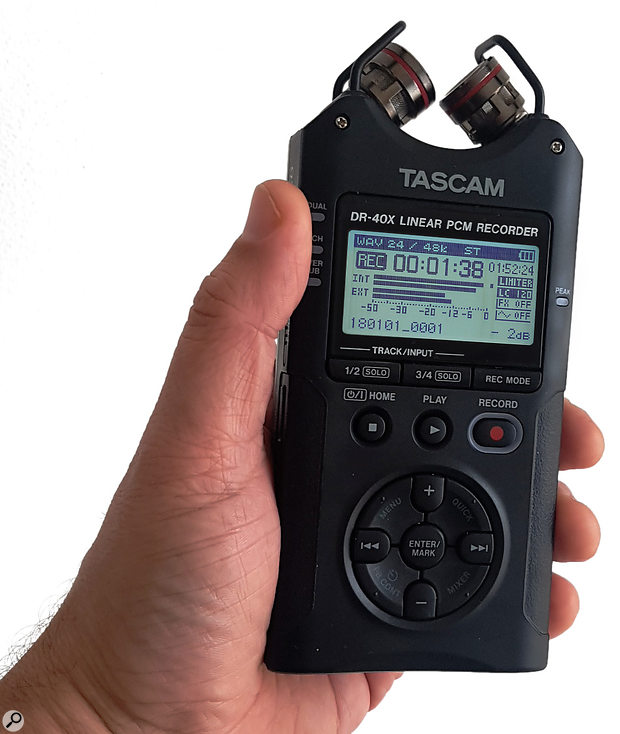 If the DR-40X looks familiar, don't worry, you're not going mad — it looks very like the DR-40 that Tom Flint reviewed in February 2012 (https://sosm.ag/tascam-dr40). Tascam have refreshed the whole DR range, though. The LCD screens have been improved, with a strong (though not garish) white backlight that makes it easy to read in different light conditions, and support for higher-capacity SD cards (up to 128GB). These recorders also now double up as stereo USB 2.0 audio interfaces (class-compliant for Mac and iOS, with an ASIO driver for Windows). There's an entirely new model in the range too, the DR-07X. But while the smaller devices will appeal to some, SOS readers will probably be most interested in the DR-40X, reviewed here. Like its predecessor, this includes a pair of phantom-capable mic/line preamps and an on‑board stereo pair of cardioid mics, and it allows you to record all four inputs simultaneously at up to 24-bit/96kHz. There's also support for broadcast WAV files and, amongst other things, dual-level recording (so you have a lower-level backup in the event of accidental clipping), overdubbing, basic mixing, and Mid-Sides decoding. The user interface is a touch more user-friendly too.

Despite its size and light weight, the DR-40X doesn't feel flimsy. It is billed as a 'portable' recorder, rather than a handheld one, and is really intended to be mounted on a camera-tripod thread, though there's a small plastic 'tilt foot' included, should you wish to place it on a flat surface. When held in the left hand, the various hardware controls are all very easy to reach — the input level can be altered with your thumb, while your right hand presses the various top-panel buttons — but there's too much handling noise to make high-quality recordings while it's held like this. That said, the switchable (off, 40, 80, 120 Hz) high-pass filter can mitigate that to some extent, and it would be fine using it like this as a dictaphone. (When mounted, as intended, this isn't an issue.) Power comes from three AA batteries (supplied) or the Micro USB‑B port; Tascam offer an optional AC adaptor, but it ran fine off the power supply of my smartphone, and it can draw its power from a computer's USB port. (It's recommended not to use a USB hub, but it did work with the bus-powered USB-C hub I use to connect my 2018 MacBook Pro to the real world.) Another benefit of USB power is that high-capacity portable power supplies are inexpensive and readily available, and so too are replacement PSUs and cables. 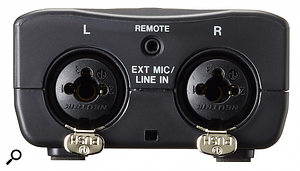 The DR-40X features two Neutrik combo sockets that can accept external mic or line sources.Speaking of phones and computers, the USB connectivity can be used in three ways: for power only, to use the DR-40X as an SD card reader (to transfer recordings), or for computer audio interfacing. You're prompted to select the desired USB mode when you plug in the cable and/or power up. When in stand‑alone mode, the DR-40X can record four tracks simultaneously and supports up to 24-bit/96kHz audio. When used as an audio interface it is limited to 44.1/48 kHz and stereo operation. Nonetheless, you can choose whether the stereo input is captured from the built-in mics or the external mic/line preamps.

The built-in mics are directional (cardioid), and can be rotated manually — they form a coincident X-Y pair when both are positioned at the inner extreme of their arc, or an A-B pair (facing outward at a mutual angle of 90 degrees) at the outer. The external inputs come in the form of Neutrik Combo jacks, which can supply +24 or +48 V phantom power, and can also accept line-level sources. Phantom power is switchable globally via a slide-switch on the left-hand panel, and to prevent accidental damage you're prompted to confirm you intended to switch it on. Monitoring, whether using the DR-40X stand‑alone or as an interface, is via a 3.5mm headphones/line‑out jack on the left side, or the tiny audition speaker on the rear.

Input gain and phantom power are controlled via switches on the left side-panel.While batteries are included, there's no built-in storage and there's no SD card provided. There's no USB cable either, which is arguably a touch miserly — it's not that I begrudge spending the small amount these things now cost, but rather that it wouldn't cost the manufacturer much and most people will prefer the device to be record-ready out of the box.

I haven't the space to cover everything in detail, so do read Tom's original DR-40 review, which is free to view (see above), and covers some ground I don't. The supplied owner's manual also describes most functions very clearly, with good use of diagrams, and there's a more detailed PDF Reference Manual on Tascam's website. Here, I'll focus on what, for me, are this recorder's highlights, and a neat time-saving feature worth mentioning up front is the Quick button. This front-panel button brings up a context-sensitive menu, and means you don't waste time knee-deep in menus. In fact, the interface generally is great: there are 15 top-panel buttons (nine of them, including the Quick button, arranged in a circle, like a TV remote) and the menus don't have many nested levels. Once you've spent half an hour or so exploring the thing, everything becomes very obvious.

On first boot, you're prompted to set the date/time and, once a fresh SD card is inserted, to create a system file. After this, basic recording is about as idiot-proof as it gets. Booting takes mere seconds, then press the red record button on the front/top panel to meter the input levels, use the +/- Input Level buttons on the left panel and the on-screen meters to set the desired recording level, and press record again to commence recording. Press stop when you're done, and press play to play it back. Navigating between files and within files is similarly easy, and there are some neat features such as being able to press a button to jump forward or back within a recording by a user-specified amount of time. So the basics of recording and playback are refreshingly simple. That said, I found it just a tad frustrating when I wanted to make big input gain changes — it took a while to make such changes using buttons rather than a wheel/knob. 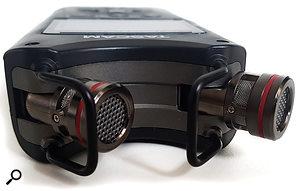 The DR-40X's onboard mics can be swivelled — the idea being that you can configure them as an X-Y or A-B pair.The DR-40X defaults to stereo recording via the in‑built mics (which sound just as clean and clear as I've come to expect from Tascam) but there are various recording modes within easy reach — namely Mono, Stereo, Dual, 4CH and Overdub. In each of these, you have various options including source selection. Mono can be a mono mix of the on‑board mics' signals (sadly, there's no option to record mono from only one of these mics) or captured from the left external input. In Stereo you can choose between the on‑board mics and the external inputs, and you can invert the channels too, so that the left mic is written to the right channel, and vice versa. For the external inputs in Stereo mode, you can choose to treat them as a stereo pair with a single gain setting affecting both inputs, or as separate channels with independent gain controls, and you can engage a Mid-Sides matrix too, which is a really useful feature. Dual allows you to record a 'safety' file with lower gain, the amount being between -6 and -12 dB, specified in dB increments by the user, and again you have access to the M-S matrix. 4CH, as the name implies, enables recording of three or four channels simultaneously; again you can choose how you address the external inputs and opt to engage M-S, and there's provision to delay either or both inputs by up to ±150ms.

It's great to have overdubbing and mixing facilities on a small, portable device like this one, and while there are inevitably some limitations when compared with modern DAW software — there's no dedicated provision for a guide/click track, for instance — this side of things has been pretty well thought out. In fact, I'd consider it to be the DR-40X's stand‑out feature. This being a four-channel recorder, you can play back a maximum of four channels at a time, but you can tweak the level and pan of each of those four channels, and can, if you wish, bounce the mix down. You can also overdub as many takes as you want, courtesy of a couple of different Dub modes. The starting point for both is to capture a mono or stereo track in the normal way. Then, in the Mix Dub mode the recorded overdub is merged into the original playback file, rather as happens with a typical looper pedal (except that the result is recorded, of course!). In the Separate Dub mode, each overdub is written as a separate file. This means you can record as many takes as you want in Separate mode, and later transfer all of them to a computer (though, again, note that you can choose only one stereo take to audition alongside the initial recording on the DR-40X when used stand‑alone, since it can only play back four channels). 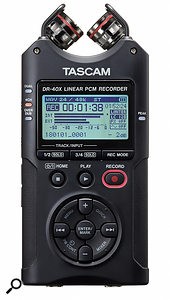 There are a couple of limitations, such as not being able to use Separate mode with mono recordings (which I'd find useful), and the aforementioned inability to select a single on‑board mic as a mono source, but in general the overdub facility has the potential to be really useful for bands and songwriters who want a scatchpad to help them thrash out an idea, and it's well in advance of what I'd expect of a compact recorder such as this.

As I said, there are all sorts of cool features I haven't the space to cover in detail. There's an auto-record function, for example, where recording is triggered by signals exceeding a threshold. There's an up-to-two-seconds pre-record facility, and a self-timer to allow you time to pick up your instrument before recording commences. There's a limiter, an auto-gain correction facility, digital EQ, location markers, punch-in and auto‑split functions, support for playlists... and more besides. The various optional accessories, including a windshield, wired/wireless remote control, a footswitch and an external battery pack just add to the appeal. It sounds good, and does more than simply record — it's great to have overdubbing, and a handy backup audio interface into the bargain. All in all, then, the DR-40X is a great, versatile recorder for the money. Sure, a couple of things could be improved, such as that inability to capture a mono recording from a single in‑built mic, but there's nothing that will bother 99 percent of prospective users. Recommended.

The closest competitor to the DR-40X is undoubtedly the Zoom H4n Pro, which has a similar feature set for a similar price. Other Tascam and Zoom recorders, as well as models from the likes of Olympus, Marantz and Sony support external mics, but don't offer the same musician-friendly functions — until you start to consider pricier options such as the Sound Devices MixPre range.

More than the average portable digital recorder, the DR-40X offers four-track recording, overdubbing and basic mixing facilities, and some useful improvements on its predecessor.