Supro's roots lie in the earliest days of electric-guitar amplification, but they enjoyed a resurgence in popularity in the '60s, something that was certainly helped by Jimmy Page having used their small amps during Led Zeppelin's early recording career — and the Supro Blues King 12 combo amplifier is a new compact combo that's been engineered to recreate those classic sounds. It uses a single 12AX7 preamp valve driving a 6L6 Class‑A output stage to achieve a 15W output. Additional FET circuitry is provided to add a fat Boost function and an extra Gain (overdrive) feature, both of which are activated using small toggle switches on the amp's top panel.

A spring reverb tray is located in the back of the amplifier, along with four jacks: an effects send and return, a preamp line out for recording, and a TRS footswitch jack for control over the Boost and Gain functions. The panel controls are fairly conventional, with a three-band EQ, and reverb, volume and master volume controls. Toggle switches are used for both power and standby. 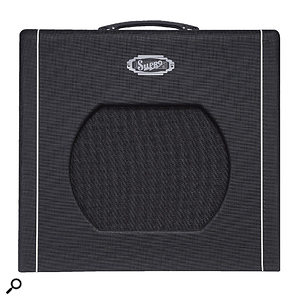 The poplar-wood cabinetry is based on the styling of the mid-1950s Comet model and comes loaded with a custom BK12 speaker, a 12-inch design that's intended to capture the tonality of the original 'field-coil' speakers used back in the day when speakers were driven by electromagnets rather than permanent magnets. A tidy vinyl covering with white piping gives the amp a sleek, retro look and this is reinforced by the shaped cut-out speaker baffle. The rear panel has two large cutouts and leaves space to stash the mains cable, which is captive rather than on an IEC connector.

Played with the Boost and Gain switches off, the Blues King 12 exhibits a lively, touch-responsive clean quality that teams well with drive pedals. Bring in the Boost and the sound takes on both punch and a slightly driven edge, responding well to playing dynamics. There are some classic blues sounds to be had here, especially if you add a hint of that authentic spring reverb to take off the dry edge. Engage Gain and you're into rock territory, and with all the tone controls near their centre position, the tonality is bright and cutting, reminiscent of some early Led Zeppelin records. This can be smoothed somewhat by use of the EQ but you get the feeling that aggressive drive is where the Gain mode is happiest. For more restrained drive sounds the Boost switch and/or a good overdrive pedal may be more appropriate.

The DI line out is not speaker emulated, and as it comes from the preamp output it misses out on any power-stage saturation, but it doesn't change in level as the master volume is adjusted. For live use, then, DI'ing into the main PA would mean passing the line-out signal through a speaker emulator. In the studio, however, not having a speaker emulated DI output can be an advantage, as it allows software speaker emulators to be used, giving you far more choice over the type of speaker cabinet. For my tests, I used a Celestion IR loaded into Logic's Space Designer and right away I had a very usable result. I can also confirm that background noise is commendably low. Augmenting the valve signal path using FET circuitry for the Boost and Drive doesn't seem to have compromised the sound of the amplifier in any way.

Given its performance, compact size and ability to sound good at low power levels, the Blues King 12 makes a great studio amp, and it will be suitable for pub gigs and the like too. It isn't cheap, exactly, but it is still very competitively priced when compared with other valve amplifiers of a similar format and power output. Having an effects loop is a handy bonus on an amp of this size, while the inclusion of the Boost and Gain switches gives the amplifier three different but useful personalities, adding to its versatility.