Sound Performance Lab, better known simply as SPL, have made high-quality audio equipment for three decades now, and they've always prioritised sound quality above all else — but they've often pioneered innovative technologies too. On review here is the company's latest eight-channel mic preamp, the Crescendo, which is a substantial piece of kit, housed in a 3U rackmounting chassis which extends 310mm behind the rack ears and weighs over 10kg. From the user's point of view, it's very straightforward, just as a preamp should be, but it features some interesting technology that sets it apart from most mainstream preamp designs. In particular, the Crescendo uses bespoke, discrete transistor op-amp gain stages and output drivers, which SPL refer to as SUPRA op-amps.

Other manufacturers use discrete op-amp stages, of course, but SPL's approach differs dramatically in their use of unusually high power-rail voltages: the circuitry operates on symmetrical ±60V power rails, an arrangement which might be expected in a power amp but is very unusual within a preamp. The Crescendo is not the only SPL product to work with such elevated power rails; the same engineering approach is used in several of the manufacturer's high-end headphone amps, their phono preamp, several power amps, a D-A converter, the Neos console (https://sosm.ag/spl-neos) and, of course, all of their mastering console product range. So the technique is well-established, and the SUPRA op-amp modules have now been developed into a fifth-generation design.

The significance of the power-rail voltage is that it effectively defines the largest audio signal the circuitry can accommodate: the higher the voltage, the greater the audio headroom. In the days of valve equipment very high anode (plate) voltages were commonplace, so valve equipment has always operated with plenty of internal headroom — that may well be one of the appealing factors of the 'valve sound'.

However, transistors, and then op-amps, brought with them a general reduction in power-rail voltages. For example, the classic (transistorised) Neve 1073 preamp was designed to run on a single-sided 24V rail, while the 500-series modular system operates with ±16V rails, and most IC-based audio equipment rarely runs on anything higher than ±18V. So, bearing in mind that the maximum audio signal level will almost always be a Volt or two lower than the power rails, the highest signal level that can be accommodated in the 1073 is about 22V peak-to-peak, which translates to +20dBu, in round numbers. (In the published specs the 1073's maximum output is given as +26dBu — the extra 6dB comes courtesy of the voltage step-up in the output transformer.) The maximum signal level in a 500-series module running directly off the ±16V rails (some modules raise the voltage internally) is around +23dBu (31V peak‑to‑peak), while a device running on an ±18V supply can just about manage the industry standard peak level of +24dBu (34.7V peak‑to‑peak).

As you can see, the decibel scale's logarithmic nature means the power rails have to increase quite a lot to bestow a significant increase in headroom — and this is why SPL have gone all the way to ±60V rails in the Crescendo. These rails facilitate a massive maximum internal signal level of 34.5dBu (116V peak‑to‑peak), almost a four-fold increase in headroom above a conventional professional device that clips around +24dBu. The claimed benefits for this high-voltage technique start, of course, with a massive dynamic range capability. This translates into much greater transient precision and very low distortion, which manifests as increased overall transparency and naturalness. Basically, it ensures a pristinely clean signal under pretty much all circumstances — essentially, it embodies a 'Rolls-Royce engineering' approach to audio circuit design.

It doesn't take long to comprehend the facilities and features of the Crescendo, and there's little need to consult the brief but well-written user manual. Starting at the rear panel, two rows of eight XLRs provide the individual inputs and outputs, identified with SPL's distinctive dual-orientation labelling, which makes it delightfully easy to plug things into the right sockets either from the rear or when leaning over from the front; a simple but practical and thoughtful touch. The audio I/O is all electronically balanced, and the eight line outputs are duplicated on a 25-way D-sub socket wired to the AES59 (Tascam) standard, allowing the preamp to be hooked into a recorder or interface with a single multicore cable.

The XLR analogue inputs and outputs are duplicated on DB25 connectors, and SPL's simple both-ways-up labelling is a nice touch — it can be extremely helpful when looking over the top of the unit to plug cables in.

Mains power is connected via the usual IEC inlet with an integral fuse-holder and voltage selector switch — the instant give-away that this unit features a linear power supply rather than a universal switch-mode type. Its toroidal mains transformer features a mu-metal shield to constrain its radiating magnetic field and, additionally, the entire power-section electronics are screened from the audio circuitry by another mu-metal plate extending across the full depth and height of the chassis to further minimise any risk of magnetic coupling into the sensitive audio circuitry. 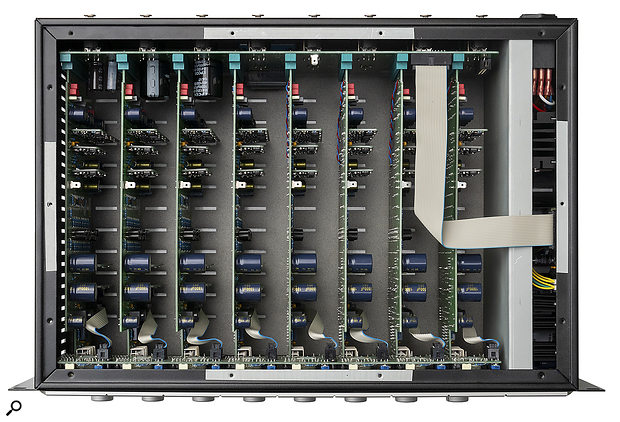 A view of the internal construction of the Crescendo. The shielded power supply is at the extreme right-hand side, and several of the SUPRA discrete op-amp daughterboards can be seen extending from the individual channel cards towards the rear of the unit (there are two more at the front hidden below the large capacitors).

Removing the steel lid (which weighs over 1kg and is held in place by 14 screws) reveals that each preamp channel's electronics are accommodated on individual, vertically mounted circuit boards. These extend the unit's full depth between an EDAC edge-connector on the vertical back-plane PCB, which carries the socketry, and the corresponding front-panel controls. A mixture of SMD (surface-mount) and through-hole components are used, and each channel's quintet of bespoke high-voltage SUPRA op-amps are contained on five small daughter-cards, mounted at 90 degrees on the channel boards. 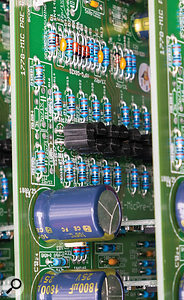 Apparently the SPL engineers used critical listening sessions to identify and select the best-sounding components (transistor types, resistors, capacitors and so on) to use in production. Inter-stage coupling capacitors have been avoided where possible, with active DC servo circuitry to eliminate any DC offsets. The output driver stage is a variation on the standard SUPRA design that operates as a Class-A current amplifier running a relatively high (6mA) quiescent current, and this enables it to drive long cables with ease.

Although quite complex, the entire construction is beautifully engineered and inspires confidence. Despite the density of circuitry, there's no fan; cooling is entirely convective, via slots in the base and top panels. (The unit never became more than mildly warm during my tests, but when rackmounting it might be wise to leave 1U of space above and below the Crescendo, to ensure a good air flow.)