The eight channels' front-panel controls are arranged as vertical strips, each with a round VU meter at the top, a rotary gain control at the bottom, and a group of four toggle switches in between. The switches provide a 20dB input pad, polarity inversion, phantom power (with a blue status LED), and a 10dB attenuator for the VU meter to enable the display of high output signals. The SPL logo on the right-hand side looks like it could (or should) be the mains power button, but it's not — that's a rocker-switch around the back, which I always find rather frustrating in a rackmount product, especially one that consumes over 50W!

The gain control is a smooth and nicely weighted potentiometer rather than a rotary switch, which surprised me, and is scaled from +18 to +70dB. Although the scale markings are quite finely graduated, there's inevitably some variation between the marked and actual gains at different rotational positions, and there are small variations between channels set ostensibly to the same marks. However, the infinite adjustability of a potentiometer makes achieving perfect channel matching straightforward given decent monitoring/metering in downstream equipment.

In common with many other preamp designs that employ potentiometers, the available gain tends to bunch towards the clockwise end, meaning that a small rotation of the control introduces a lot more gain change at the loud end than at the quiet end. This common characteristic is reasonably well controlled in the Crescendo — I had no problems setting the desired gain level, although gain matching at very high gains was a bit fiddly.

With the 20dB input pad engaged the gain range shifts to -2 to +50dB, so both high-level microphone outputs as well as line-level sources can be accommodated, if required. And as the input impedance is 10kΩ, sources are never heavily loaded, and passive ribbon mics can really 'sing'.

A high resolution FFT of the residual noise floor with 50dB of gain dialled in to channels 1 (green) and 8 (purple). A number of mains-related harmonics are present, but none higher than -95dBu.The Crescendo's manual comments specifically on the input stage's high common mode rejection ratio (CMRR), but the published CMRR figure is given as better than 65dB at 1kHz — which isn't actually that special! I'm always amused when manufacturers specify the CMRR at 1kHz, because common mode rejection is about keeping out unwanted interference, and that's rarely a problem at 1kHz. Much more important is how well magnetically coupled mains hum getting into mic cables can be rejected, and how well electrostatically coupled radio-frequency interference (RFI) is kept at bay. Ideally, we're looking for a CMRR figure well in excess of -80dB. Thankfully, then, when I ran a set of bench tests on the Crescendo using an Audio Precision test set, I achieved CMRR figures of between 89 and 96dB (a degree of variation is to be expected between different channels) at 1kHz — much better than the published spec! More importantly, I was still getting figures of between 75 and 87dB at 50Hz, and more than 75dB at 80kHz. Taken as a whole, this is a very good result indeed and SPL are right to proclaim their achievements. 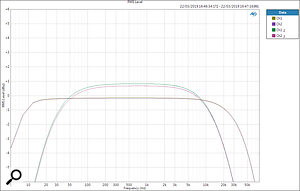 A pair of frequency response measurements obtained with preamp gains of 50 and 70dB — the latter reveals an obvious reduction in bandwidth. Note that the extended scales exaggerate the effect for clarity; at 70dB the high frequency -3dB point falls to around 18kHz, whereas it's over 40kHz at 50dB gain.SPL also claim that the preamp has a bandwidth extending to 50kHz (-3dB), but my tests did not agree. At lower gain settings, my -3dB frequency response measurements were 6Hz‑40kHz for all gain settings at and below 50dB, and 10Hz‑30kHz at 60dB of gain. Though these figures may not be quite as impressive as the quoted spec, they are nonetheless very good. However, all amplifier circuits have a certain 'gain-bandwidth product', whereby the operating bandwidth diminishes as the gain is increased, and it seems that the 70dB maximum gain available in the Crescendo is really pushing the limits of what the SUPRA gain stages can deliver, because when running flat out with 70dB gain dialled in my measurements gave the Crescendo's -3dB points at 20Hz and 18kHz, which is a little disappointing, technically (though it's rarely going to be a problem in practice).

Measuring the signal‑to‑noise ratio, I achieved -68dB (A-weighted) at 60dB gain, and -91dB (A-weighted) at 30dB gain, which agrees with SPL's figures, as does the Equivalent Input Noise (EIN) value of -129.5dBu (at 60dB gain with a 150Ω source), which is a very good result. THD+N measured 0.003 percent at 30dB gain, rising to 0.05 percent at 60dB gain, again matching SPL's specifications, while crosstalk between adjacent channels was better than -89dB at 10kHz, which is excellent.

The Crescendo is entirely straightforward to connect and use, although note that it appears to benefit from a short (10 minutes or so) warm-up period. I did notice a very slight rounding or curtailing of 'airiness' at the extreme high end when using the maximum gain setting, but in reality there are few occasions when that's likely to be an issue, and at more typical gain settings the preamps always sounded wonderfully open, crisp, full-bodied, and effortlessly transparent — a large part of which must be down to the massive internal headroom and dynamic range. So, accurate fidelity is the key descriptor here: this is not a preamp that imposes any obvious sonic character.

In summary, then, SPL's Crescendo is an impressively-built multi‑channel mic preamp which espouses the art of the discrete transistor op-amp operating on high-voltage rails, and that unusual design approach pays off in its graceful and natural sound quality.

The world is awash with multi‑channel mic preamps, but few are built as solidly as the Crescendo, fewer employ bespoke discrete transistor op-amps, and none that I know of operate on ±60V power rails.