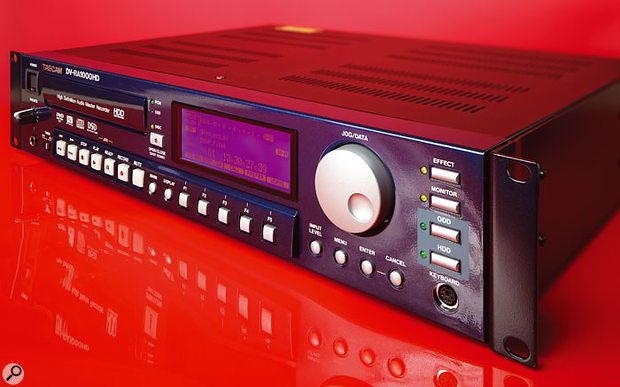 Real-time recording to CD, DVD or HD - and DSD too? Tascam's newly upgraded DVRA1000 now seems to have it all...

However, the choice of CD-R, DVD±RW and DVD±R media seemed to me, at the time of my review, to be rather restrictive and relatively cumbersome: fine for archiving purposes, but a little clumsy for day-to-day recording projects that would subsequently need editing on a computer DAW system. It seemed to me that the obvious way forward was to incorporate an internal hard drive in the machine, instead of — or possibly as well as — the DVD drive. This would place the DVRA1000 on more of a level with the growing number of hard-disk and flash-memory recorders, and would make it a far more attractive proposition to a large sector of the potential market.

Lo and behold, it's a year later and Tascam have introduced the DVRA1000 HD, which enhances the original model with the inclusion of an internal hard drive in addition to the standard DVD drive. This allows the user to record projects direct to hard disk without the additional media costs of DVD±RW or DVD±R discs, while also providing a simple means of archiving material and of copying selected material to CD-R or DVDs as necessary.

The two machines (the original DVRA1000 and the new DVRA1000 HD) appear to be virtually the same, but can actually be identified easily by their different front-panel colours. The original model is a dark grey whereas the new HD version is a very pleasant dark blue colour. A minor front-panel graphic change also helps to distinguish them, with the various format logo badges relocated from above the DVD drawer to below it. More significantly, a couple of buttons on the extreme right-hand side have been re-purposed. The buttons that previously provided direct access to the Fade and Sync Rec modes now switch between the optical disc and hard disk for recording and playback (the Fade and Sync Rec modes are still available, but must now be accessed via the 'virtual control panel' on the LCD screen).

The DVRA1000HD offers plenty of input and output options, including USB connectivity.Photo: Mike CameronThe menu structure has also been updated, of course, to accommodate the new HD functionality. However, other than these few enhancements and updates, the new machine has exactly the same facilities and features, and the same excellent sound quality, as the original.

As with the original model, Minnetonka's Disc Welder Bronze1000 software is also available as a free download from the Tascam web site for registered owners of the machine, although this is a two-week trial version, which has then to be upgraded to the full version by registering on Minnetonka's web site. The process is something of a palaver but the program is useful to have, as it provides DSD file conversion and DVD-Audio disc authoring for high-resolution audio files. It's just a shame that the full version isn't included in the box with the machine itself.

Although it would seem to be the unique selling point of this machine, I couldn't find any mention in the manual or technical specifications, or even on Tascam's web site, of the capacity of the machine's internal hard drive. However, once hooked up to my computer via USB 2.0 (the machine can be configured to act as a remote storage device when linked to a computer, which makes for easy file transfers) it was quickly revealed to be a 60GB drive, which is the equivalent of about 12 standard DVD discs.

To facilitate working with the internal hard drive and removable optical discs, the menu system has received a major reworking, to include an enhanced file-copying section. Facilities have been added to allow file transfer between the HD and DVD (or CD-R), in either direction. Entire projects can be copied, and if a CD-R disc is inserted in the optical drive an audio CD can be compiled from individual audio files stored in different projects (provided the sample rate is 44.1kHz). A two-second silence can also be inserted between tracks if required. Although crude, this is a useful facility to have when compiling an auditioning disc from recorded 'rushes.' It's disappointing that the onboard DSP facility doesn't run to a sample-rate conversion utility, as that really would enhance the usefulness of the machine. But perhaps we'll be offered that in another year's time in the DVRA1000 SRC model!

The DVRA1000 HD is a significant step up from the original DVRA1000 model in terms of practicality and convenience, and is all the more attractive as a product because of it. It is also unique, as far as I know, with the ability to record in real time to CD, DVD or hard drive. However, I suspect very few actually require this specific feature set. Most users would probably be perfectly happy with high-resolution recording to hard drive or flash memory, and then use their computer DAWs for any CD or DVD disc requirements.

Given that assumption, it seems optimistic of Tascam to have raised the price of the DVRA1000 HD so far above its older, HD-less sibling. Given that the retail price of a 60GB 7200rpm drive is well under £100, it is hard to understand why the DVRA1000 HD currently costs over £300 more than the DVRA1000 model! Although the machine has obviously been revised slightly, to accommodate the hard drive, I can't see the justification for such a significant difference in price. There are just too many other high-quality, high-resolution recorders around now at very competitive prices. Consequently, despite the convenience, operational virtues and sonic niceties of the machine — and there are many — I'd really like to see this priced a little lower.

The DVRA1000 HD has a unique feature in its ability to record to DVD, CD or HD. However, as a straight high-resolution recorder the Korg MR1000 offers the same file formats (including DSD), with the advantage of portability and microphone inputs. Other high-resolution recorders worth comparison are Tascam's own HDP2 (PCM only) and the Fostex FR2 and FR2LE. For high-end users, the Sonic Devices 722 is hard to beat, but costs a little more.

A stereo high-resolution digital recorder offering standard PCM formats up to 24-bit, 192kHz, plus a DSD bitstream mode. The only significant difference between this model and its older DVRA1000 sibling is the inclusion of a 60GB internal hard drive for recording and file transfers between optical discs.