DP 's native Sound Designer II audio format can carry region information within files. That fact may not sound especially significant - but with the help of our guide you can use it to help you compile and burn CDs quickly and easily. 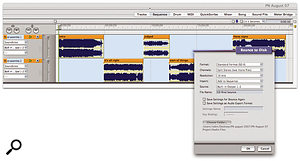 Bouncing a 'CD assembly' sequence into one long 16-bit soundbite. The screenshot shows the correct settings to make in the Bounce To Disk window.In the Digital Performer workshop last month, I looked at ways in which DP can be used to prepare running orders for and generally co-ordinate mastering projects that contain more than one song or number — for an album or EP, for example. In a nutshell, this involves using the sequence editor to 'host' finished bounces of each number, placing them sequentially in the timeline, then writing markers to define CD track start points. Clicking on a marker in the Marker Strip then causes a region to be selected which extends from that marker to the next, allowing you to Bounce To Disk a track-length chunk of audio ready for passing on to to your CD-burning application.

There's a lot to commend this method, but it has two drawbacks. First, if your 'master' mix included any reverb, delay or other 'duration extending' effect, this won't be dealt with properly when bouncing individual track-length regions, and you'll get clicks (or a sudden stop of the sound) at the CD track boundaries. Second — and more pragmatically — if your album has a lot of tracks it's rather labour-intensive. For example, let's say you've just recorded a two-hour live gig straight to a number of audio tracks in DP. You've done a mix, got a great sound, applied the necessary edits and fades to make this mix the 'finished product' and cut down the length to a CD-filling 74 minutes. All you want to do is somehow split up this soundbite into individual songs so that you can burn it to CD. You could, of course, use exactly the same process described above (and last month), placing markers within your audio to represent track starts, and then, one by one, selecting them and bouncing track-long sections ready for burning. But doing any more than a few individual Bounces to Disk is a drag and ties you to the computer for long periods of staring at progress bars. So here's a smarter method, which can be pressed into service for other tasks, such as album mastering projects, too. It relies on having access to a good CD-burning application — see the 'Sound Designer-compatible Burners' box — but it has the potential to really speed up workflow.

I've got three similarly-shaped keyboard shortcuts for you this month, plus some thoughts on soloing.

The Track Selector List, which shows and hides tracks in many edit windows. The yellow 'Auto-Scroll' indicator can also be seen here.

Splitting the long soundbite into track-length sections, using Markers and the Apple+Y (Split) edit command.This alternative CD-preparation technique relies on the fact that DP 's native Sound Designer II audio format can carry region information within the file. In DP-speak, a region is synonymous with a soundbite — a portion of audio within a 'parent' sound file. The idea is that you first bounce your entire sequence to one long soundbite, then split that up into track-length soundbites (a quick process), and finally feed the single 'parent' audio file to your CD-burning application. As long as it can read region information, the application will see each soundbite as a separate track, and you'll be ready to burn. The following description might suggest this is quite long-winded, but when you're used to it it's very quick indeed — much quicker than doing loads of separate bounces.

Labelling the newly-split soundbites to avoid confusion later. 1. Open your gig-recording or mastering project. Make sure your mix is completely finished, and that you have a 16-bit dither plug-in active on a master fader if the project was recorded at 24-bit resolution.

2. Open the Sequence Editor, make sure all your tracks are visible (by selecting them in the Track Selector List) and then hit Apple+A to select the entire sequence. If your master mix does include reverb or delay, make sure you select a sufficient extra time-range after the last soundbite finishes to cover the 'tail'.

Preparing to delete soundbites that are not part of the intended track selection for the CD final bounce. 3. Bring up the Bounce To Disk window, by hitting Control+J or choosing from the Audio menu (see screen at start of article). What you want to do is bounce your sequence to a single, long, 16-bit soundbite, and for this to appear in a new track in your sequence. With this in mind, the settings to make are: Format: Standard Format (SDII); Channels: Split Stereo; Resolution: 16 bits; Import: Add to Sequence; Source: Your main stereo output pair (perhaps 'Analogue 1-2' or 'Built-in Output 1-2'); File Name: Something distinctive (perhaps 'CD final bounce'). Just allow DP to write the new bounced audio file into the Project's audio folder — ie. don't change the default setting under 'Choose Folder...'

4. Click 'OK' in the Bounce To Disk dialogue box. Depending on the speed of your Mac and complexity of your mix, the bounce might take a few seconds or half an hour. If it's nearer the latter, now might be a good time to make a cup of tea! Either way, the bounce gets done in one go, and when it's finished you'll find a new stereo track in your sequence, called 'CD final bounce' (or whatever you chose in step three), with a soundbite of the same name placed on it. 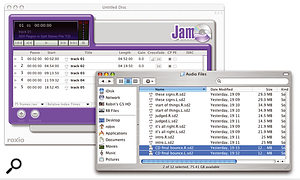 The CD final bounce soundbites now need to be passed to a Sound Designer II-compliant CD-burning application, which will recognise them as separate regions and therefore separate tracks. Using Roxio's Jam, for example, the soundbites can simply be Apple-dragged from DP to Jam's Playlist window.

5. Now this soundbite needs to be split into CD track-length sections. This can be done manually with the Scissors tool, or with this nifty method. Go through your sequence and write a marker (Control+M) everywhere you want a CD track to start. It's not necessary to do this for track one, as the start of the soundbite effectively defines the start of CD track one. Then work from the start of the sequence to the end, shift-clicking every other marker in the Marker Strip, to end up with a stripy series of time-range selections. Hide all other tracks and hit Apple+Y (or choose Split from the Edit menu) to make a series of simultaneous cuts on CD track boundaries (see screen at bottom of first page).

6. Although this step is not strictly necessary, I'd advise doing it at least the first time you try this technique, as it avoids possible confusion later. Again, working from the beginning of your sequence to the end, go through and shift-click the name of each of your track-length soundbites, renaming them 'Track 01', 'Track 02' and so on (see top screen, previous page).

7. We're getting nearer to the burn, but there are two important steps left. The process of cutting or splitting soundbites can leave 'redundant' soundbites, which you need to get rid of before passing your bounced audio file over to your CD-burning application. To do this, open the Soundbites window, by hitting Shift+B (and if it appears in a window separate from the Consolidated window, make sure the List tab is selected). Choose Soundfile from the View By: pop-up window and locate your new soundbite, 'CD final bounce', in the list. Make sure its disclosure triangle is clicked, to reveal the soundbites that reference it.

8. Now, select (by dragging over or shift-clicking their names) any soundbites that are part of 'CD final bounce' but are not called called 'Track [number]'. As you might now see, this was the point of step six. Finally, with these multiple soundbites selected, choose Delete from the Soundbite Window's mini-menu. For safety, save your project.

OK: we're getting there, and your work in DP is now done. For the next step you might want to hide DP to get some desktop back!

9. In the Finder, navigate to your Project folder and open it, then open the Audio Files folder within. In there you'll find the sound file called 'CD final bounce' as a left and right pair of split Sound Designer II files. You now need to pass these on to your CD-burning application, making sure it understands that the sound file's track-length regions are meant to become separate CD tracks. In Roxio's Jam, for example, you simply Apple-drag the 'CD final bounce' files from the Finder to Jam 's playlist window. A dialogue appears to ask which regions you want to import, and you can Apple-click each to select just the ones you want included (see screen, top left).

10. As a final step, make sure all track-gaps are set to zero seconds (no gap), except for the pre-gap of track one, which should always be set to two seconds. You can do this because you should have defined the track gaps or overlaps in your DP sequence, and you don't want the CD-burning application to modify these further. There could be situations where you need to introduce longer track gaps, but try zero seconds as a starting point. You can now burn the CD. Maybe it's time for another cuppa! 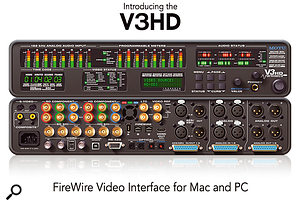 As I mentioned last month, not all CD-burning applications are created equal. Some, like iTunes, can't even manage the Disc-At-Once burn that is required if you're passing your disk on for replication. Other freeware or shareware applications support a more limited range of audio file types. To get to the point, if you want to make use of the region-based CD burning method described this month, you need a fairly recent version of one of the following:

After discontinuing Jam, Roxio claim to have incorporated many of its features into Toast 8. However, it seems that Sound Designer II region support is still either broken or problematic in the latest version. If you have experience to the contrary, I'd be happy to hear from you and publicise the good news!