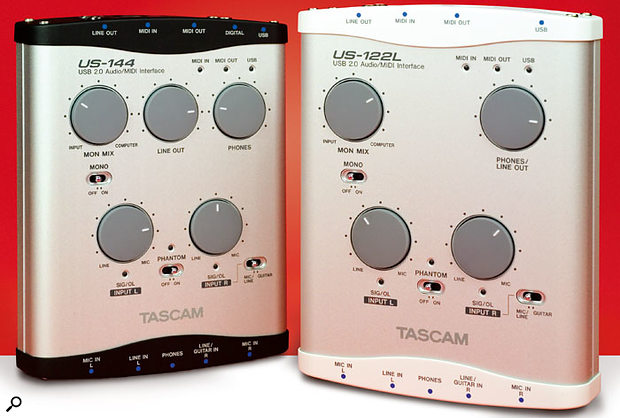 The selection of USB 2.0 interfaces widens with the launch of these new models from Tascam.

Until recently, there were relatively few USB 2.0 audio interfaces available to musicians (Edirol were one of the very few manufacturers with any on offer), but this situation finally seems to be changing, with new models from Emu and Tascam emerging over recent months. There's still nothing wrong with USB 1.1, but for anyone who wants more than two channels of 24-bit/96kHz audio, the extra bandwidth of USB 2.0 is mandatory.

Tascam offer two very similar models in their new 'US' range — the US144 and the US122L — both featuring flat tube-like metal casework that seems very rugged, and moulded end-cheeks (black for the US144 and white for the US122L). They are also USB-powered, which will make them popular with laptop owners who don't want to cart around yet another power supply. The interfaces both sport unusual flat, rubbery rotary knobs that are just a couple of millimetres proud of the metal case, so you have to spin them with the ends of your fingers, rather like you would a turntable. I found some of them easy to spin with one finger end, while others were stiffer and required two fingers to move. I suspect that some people will really like these, while others will really dislike them!

Both interfaces offer two analogue input channels, each of which provides a balanced XLR mic input and an unbalanced quarter-inch jack input. You can plug in two mics, two line-level signals, or one of each, but you can't use mic and line inputs on a single channel simultaneously.

There's optional global phantom power (no voltage specified) for the mic inputs, while one of the two line-level inputs also provides a switchable high input impedance, making it ideal for plugging in an electric guitar or bass without high-frequency loss. Both inputs have their own rotary gain control, along with a useful tri-colour signal/overload LED that shines green with acceptable input levels, turns yellow at about 2dB below clipping, and red at 1dB below clipping. 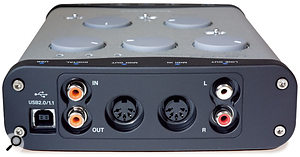 The US144's connectivity comprises (top) two XLR mic inputs, two line inputs, one switchable for high impedance, and a central headphone output jack, plus (bottom) a USB port, coaxial digital I/O, MIDI I/O, and stereo analogue outputs on phono connectors. The 122L loses the digital I/O but is otherwise similar.The US144 and the 122L both offer a pair of unbalanced analogue outputs on phono sockets, which means that many musicians will have to buy or make up special phono-to-jack or phono-to-XLR leads in order to plug the interfaces into their powered speakers (although you won't have to buy a mixer to do this, as claimed in another magazine!). There are also MIDI In and Out sockets, plus the essential USB 2.0/1.1 port for connecting the interface to your computer, using the supplied 1.5-metre USB cable.

Another rotary knob lets you control the Monitor Mix between the 'zero latency' input signal and computer playback signals, and there's also an associated Mono switch, which is handy if, for example, you are recording a vocal and instrument simultaneously through the two input channels and want to monitor them as one mono signal rather than one in each ear of your headphones, or want to check for phase issues between two microphone signals.

The two models finally start to diverge at this point: where the cheaper US122L provides a single Phones/Line Out rotary level control, the US144 provides separate controls for Line Out and Phones, plus an additional coaxial digital input and output.

The two product bundles are completed by the capable Cubase LE sequencer (Mac/PC), providing 48 audio tracks, 64 MIDI tracks, two VST instruments and four VST insert plug-ins per channel, plus Rewire 2.0 support; and a copy of Gigastudio 3.0 LE (PC only), featuring 64 voices and 16 MIDI channels. Finally, there's a 28-page printed manual, which is well-written and helpful, with good descriptions of all the features and what they do, details of driver and software installation, instructions on how to connect everything up, a brief introduction to using Cubase LE, and even a Troubleshooting section.

The drivers for the interfaces support both Windows XP SP2 and Mac OS 10.3.9, but as usual I bypassed the driver versions supplied on the bundled CD-ROM and downloaded the more recent Windows XP version direct from the Tascam web site, where I also noticed a new firmware update.

I found installing the drivers, the Control Panel software and the new firmware straightforward, and there's also little to say about the Control Panel software, since most of the useful controls are hardware ones on the unit itself. In the software there's simply an automatic or internal choice for Clock Source, S/PDIF and AES/EBU format options for the Digital Output, and a drop-down 'Audio Performance' list where you can change buffer/latency settings.

Tascam are unusual in not providing read-outs of buffer size or latency value, preferring to label them as highest, high, normal, low, and lowest latency values. However, my tests show that the default normal setting is in fact 256 samples (nominally 6ms latency at a 44.1kHz sample rate), while the others are 1024, 512, 128 and an unusual 49 samples (1.1ms latency at 44.1kHz).

The US144 and US122L both use the same AKM converter chips and sound identical to each other. My own Emu 1820M interface sounded rather more clean and focused in a comparison, but nevertheless the two Tascam interfaces provide good audio quality for the price, and their headphone outputs, while not as loud as some, should provide quite enough volume for most purposes. The interfaces' frequency response, as measured by Rightmark's Audio Analyser, is also fairly good, with -0.5dB points at 9Hz and 33kHz (at a 96kHz sample rate). The measured background noise level of -101dBA, while slightly higher than that of some other modern interfaces (which are often -105dBA or better), is perfectly adequate for most purposes.

Tascam advertise the US144 and US122L as easy to use, and the Control Panel software certainly supports this claim.Turning to ASIO driver performance, in the Cubase 4/SX3 Device Setup window, Tascam's 'low' latency (128 samples, giving a nominal 2.9ms buffer latency at 44.1kHz) was declared by the Tascam drivers as having an Input latency of 4.86ms, which means that the 'extras' over and above the 2.9ms of the software buffers alone amount to a very reasonable 2ms (typically, PCI interfaces add between 1ms and 1.5ms, while I've measured other USB 2.0 interfaces at close to 2ms).

As I mentioned in my review of Emu's 0404 USB interface, in the January 2007 issue of Sound On Sound, most manufacturers of USB and Firewire interfaces incorporate additional buffers on the output side to ensure smooth playback. In the case of the US144, the Cubase output latency was declared as 17.23ms (14.3ms of 'extra' buffering over the 2.9ms of the software buffers), which is significantly higher than that of any other interface I've measured to date; the Emu 0404 USB, for instance, had constant output 'extras' across all buffer sizes of just 4.9ms. Tascam's figures of 4.86ms for input latency and 17.23ms for output latency with their 'low' setting were confirmed by the Centrance Latency Test Utility, whose round-trip measurement for input plus output latency measured 22.4ms (4.86ms plus 17.23ms totals 22.1ms).

Those wanting to play soft synths in real time are unlikely to be satisifed by a playback latency of 17ms, so I then switched to Tascam's 'lowest' ASIO latency setting and had no audio glitching problems on my new PC, although this did push the CPU overheads up a little, as would be expected with a software buffer of just 49 samples (1.1ms at 44.1kHz). This time, the reported input and output latencies were just 3.9ms and 4.9ms respectively, figures roughly confirmed in the real-world at 9.3ms in total (and implying that the input and output extras were now 2.8ms and 3.8ms respectively). I've not previously come across a Firewire or USB audio interface that varies its 'extras' in this way, but as long as you're aware that the playback latency is significantly higher than you might expect for all but the 'lowest' latency setting, it shouldn't cause any issues.

Finally, using the Miditest utility I measured the MIDI loopback performance at 2.4ms, significantly higher than the 1ms of most PCI interfaces, but in the same area as that of other USB 2.0 interfaces, and better than that of the MIDI ports found on most Firewire audio interfaces.

Musicians have waited a long time for a wider choice of USB 2.0 interfaces, and these two from Tascam provide a very useful set of functions for their respective prices. Being rugged and USB-powered, they will no doubt appeal to laptop owners, and especially to those who don't have the option of powering a Firewire audio interface from the four-pin ports found on the vast majority of PC laptop models.

Although surpassed by that of some competing models, the audio quality of these two interfaces is also easily good enough for most recording applications, and the inclusion of both Cubase LE and Gigastudio 3.0 LE in the bundle will keep many musicians happy for a considerable time. Tascam market the US 144 and US122L as "easy and affordable", and I think the company have achieved these two aims very well.

There are plenty of two-in/two-out audio interfaces available with digital I/O, mic/guitar/line inputs, 'zero'-latency monitoring and a handy headphone out. However, if you want a USB 2.0 interface the options narrow considerably.

One obvious competitor is Emu's new 0404 USB, which we reviewed in SOS January 2007. For around £15 more than the US144 it offers 192kHz sample-rate support, two rather than one high-impedance guitar inputs, ground-lift switches for each input, analogue Soft Limit options to prevent digital clipping, balanced outputs, and a lower (-113dBA) background noise level. However, the 0404 USB can't be bus powered.

At a similar price to the US144, Edirol's UA25 provides analogue limiting, is USB powered, and manages professional +4dBu levels from its balanced quarter-inch jack outputs, while M-Audio's Fast Track Pro is another comparable option that can be USB powered, and has balanced outputs and an insert jack for patching in external hardware effects.

Tascam's US144 and US122L should win admirers for their unusual styling and ease of use, but those playing soft synths 'live' may find processor overheads higher than with competing models.