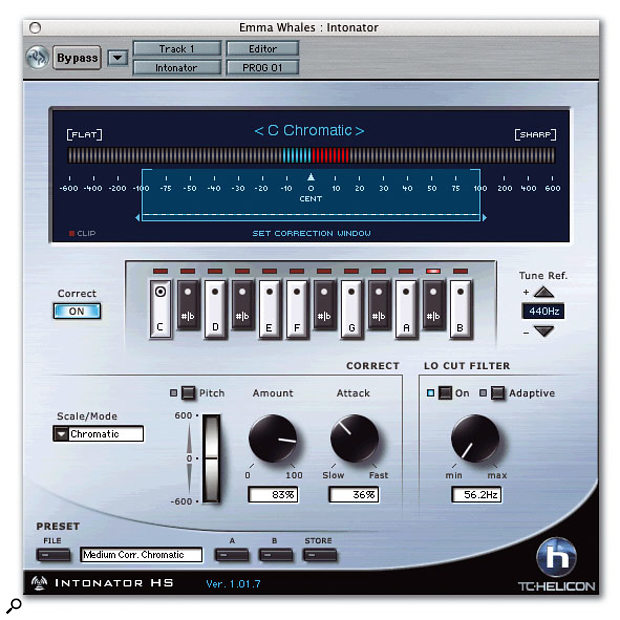 A Powercore version of Antares' industry-standard Auto-Tune pitch corrector was announced in 2001, but it never appeared. Is TC's new Intonator HS plug-in a viable alternative?

Several years ago, TC-Helicon produced a hardware Intonator which was a direct competitor for Antares' ATR1 hardware Auto-Tune box, offering real-time vocal pitch correction. This new incarnation of the product in plug-in form sees a refined version of the original 'Hybrid Shifting' (hence HS) algorithm combined with a very straightforward user interface. Intonator HS works with both the PCI and Firewire versions of the system, supporting audio hosts that can run VST or Audio Units plug-ins. As with other Powercore plug-ins, the installed version of the software is personalised to one of the Powercore devices in your system and so needs that device to be present and switched on in order to run. Once the plug-in is registered on the TC web site, you are given a download location from which to obtain your personalised Intonator, and because it only works on your Powercore hardware, you can make multiple backups and install it on multiple machines, which is particularly handy if you have a Firewire Powercore unit.

Through The Pitch Window

The Intonator window is dominated by a large real-time pitch and processing display at the top showing the maximum pitch correction range of ±600 cents. The meter has five possible display modes showing permutations of the input pitch, the output pitch or the difference between the input and output pitches; I found the 'correction only' option most useful as that's what I'd got used to when using Auto-Tune. If you're wondering how these different metering options are configured with no obvious buttons in sight, the answer is that you have to click on the pitch meter itself to get to the Meter Options menu. Level metering is also included, in the form of a clip meter with a clip hold facility that can hold indefinitely or for 10, 6, 1 or no seconds. Clicking the red Clip indicator resets it.

Just below the meter-like pitch display, you'll see a shaded area with triangular handles on each end. This adjusts the capture range around the target pitch so that only notes within a certain proximity to the target note are corrected. This ranges up to six semitones, the large values coming in useful for special scales or effects such as forcing all input notes to just one or two notes.

As with Auto-Tune, the displayed pitch correction is influenced by the control settings, specifically the correction Amount and Rate dials. The Attack control adjusts the rate at which pitch correction is applied. If it is set too fast, the correction process is unnaturally fast and tends to strip out some of the natural inflections in the voice, though you can't get the abused Auto-Tune sound — Intonator is far too subtle for that. Slower attack settings take a little longer to move notes to the correct pitch, which usually sounds more natural.

Intonator's Amount control deserves a little further explanation as it doesn't do quite what you might imagine. Specifically, if the amount is set to zero, some correction still takes place if the input is a long way out of tune. The idea behind this is that small 'errors' of the kind that occur naturally in a good singer are allowed through unchanged, but when the singer really drifts off, the processing gets stronger to compensate.

The correction applied is based on scales, which can be chosen from a list containing major, minor, harmonic minor, melodic minor, chromatic and a whole load of more obscure scales, and can be set to any key via the keyboard beneath the Pitch Meter. In Manual mode, you can use this keyboard to input the notes of your custom scale; conversely, when MIDI mode is active, the pitch corrects to notes played from a MIDI source, such as a keyboard or sequencer. Virtual LEDs above the keys track the current input pitch. Additionally, there's a pitch-bend wheel on the front of the plug-in window which can have some fairly disturbing effects if used other than very carefully, as it has a bend range of plus/minus six semitones! Unfortunately, Logic and other Audio Units hosts can't send MIDI note information to insert plug-ins, only to instruments, so the MIDI function can only be used in the VST version. 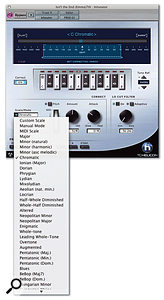 You can define your own scale or use one of Intonator HS's many preset options.

There's little other processing apart from a choice of adaptive or fixed-frequency low-cut filtering, designed to attenuate unwanted low-frequency components in as unobtrusive a way as possible — it seems that when the input level drops, more aggressive filtering is applied. When Frequency is set to Infinite, the low-cut filter attempts to track just below the lowest input pitch of the signal, and on vocals this is generally quite unobtrusive.

Though Intonator is simple enough to set up afresh every time you need it, you can store presets if you want to. Presets are saved as discrete files so that you can arrange them into subfolders if you're an organised kind of person, and in the time-honoured way, a saved preset will appear in your File menu available for future use. A and B buttons allow fast comparisons to be made between two different settings, but these locations are only temporary and so are lost when the system is powered down or if you quit or crash the host program.

I tested Intonator on some vocal parts that were fairly well sung but still a little 'iffy' in parts. I'd already tried the competing pitch correction plug-ins with a decent level of success, but straight away, Intonator sounded more natural, applying more assertive correction without giving itself away through side-effects. If you try to correct too quickly, the sound does become a little unnatural, but nothing like the warbling 'Cher' effect that spawned a whole era of Auto-Tune abuse. I haven't yet tried the latest incarnation of Auto-Tune, but compared with earlier versions, Intonator sounds a lot more polished, and seems better at making slightly unsteady vocals sound more confident. As with its competitors, Intonator also works well on many monophonic instrument sounds, such as fretless bass and even lead guitar. Where the input isn't monophonic, no pitch correction is applied.

Having a MIDI mode means you can pitch-correct pieces of music that don't stick to a rational scale, and of course most of the parameters can be automated, host sequencer permitting. Having said that, I couldn't find any easy way to handle mid-song transpositions when working in Logic, so I resorted to splitting the lead vocal on to two tracks and using a different instance of Intonator on both, with the appropriate scales set for the keys of the two song sections.

The low-cut filter is pretty clever and seems to works rather like a dynamic noise filter in reverse, cutting the low end during quiet passages rather than the high end. This is a useful process in its own right, and in some applications, can be more natural-sounding than sophisticated, multi-band denoising software when it comes to removing low-end hum and grumble.

Powercore's plug-ins are generally a cut above their native counterparts and it seems as though Intonator is trying hard to uphold this tradition. While all the pitch-correction software currently doing the rounds is very good (a lot better than it has any right to be, when you think about what a difficult job it has to do!), I think Intonator now has the edge on sounding natural and being able to apply the most assertive correction without sounding artificial. The inability to use MIDI note control in AU hosts is somewhat irritating, and although it is an AU issue, it should have been possible to design Intonator to work in an instrument plug-in slot and then route audio to it from another track via a side-chain, rather as vocoder plug-ins do already. If this doesn't look like getting resolved from the Logic/AU side of the fence, then maybe it's something TC could consider adding in a future update to Intonator?

While I don't think the pitch corrector has yet been devised that could rescue my singing, I was immediately impressed by the sound quality and ease of use of Intonator HS. If you own a Powercore system and record vocalists, this plug-in is more an essential than a luxury.