It can be difficult to exercise control over your vocal tone in a live environment. TC-Helicon aim to put the most useful effects right at your feet. 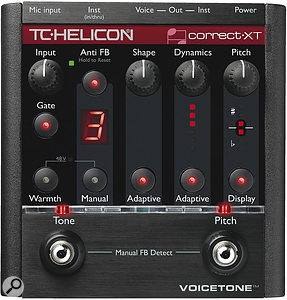 Many vocalists would love to have the same kind of control over their vocal tone on stage as they do in the studio, and TC-Helicon's VoiceTone Correct XT is a foot pedal aimed at providing just that. It combines anti‑feedback processing, adaptive EQ and adaptive dynamics, plus Gate and Warmth sections and chromatic pitch correction.

It's powered by an included mains adaptor which is, unfortunately, a little easy to dislodge, and has Instrument In and Thru sockets, a mic input and two outputs on balanced XLRs. There's also a mini-USB socket for software upgrades, and the unit includes TC‑Helicon's Mic Control circuit, allowing the company's MP75 Modern Performance Vocal microphone's thumb‑switch to turn the pitch correction on or off. In addition to a ground-lift switch, the unit also has 48V phantom power, activated by holding down both the Warmth and Manual buttons. Two footswitches activate and deactivate the Tone and Pitch sections, allowing you to disable them quickly during performance. The other sections are also easily activated using the illuminated buttons at the bottom, after which you can dial in more or less of the relevant effect. There's a mic-gain trim with level indication LED that flashes amber on input peaks, and simple 'more or less' knobs for the EQ Shape, Dynamics and Pitch sections. There's also a display in the Anti‑Feedback section that shows how many of the internal filters are active.

The rear panel of the VoiceTone Correct XT fits in plenty of connections, though it'd be nice to a have pitch‑correction-free vocal output as well.

To get started, you set the mic gain to the desired level, then set the other three controls midway. The pitch correction and anti‑feedback are best bypassed at first. When you first sing into the mic, there's a brief period of adjustment as the adaptive circuitry tries to figure out what treatment your voice needs. After this, you'll probably notice that the voice sounds both a bit brighter than usual and slightly compressed.

The Shape control adjusts a multi‑band EQ that's designed to remove muddy lower mids while adding a little air to the top end, and I found it did improve clarity of vocals to a useful degree. The Warmth button links to the Shape circuitry, boosting lower bass, while the Dynamics section combines compression with de‑essing. Adding too much compression can provoke feedback, so is best used in moderation. I found it best to set the anti‑feedback system last, as its performance is affected by the auto dynamics and EQ settings.

To set up the anti‑feedback, turn up the gain slowly to allow the nine notch-filters to adjust to the feedback frequencies as they occur. Alternatively, you can leave it set to Auto, in which case it will notch out feedback on the fly. When the Anti‑FB LED is on and the Manual LED is off, the system listens for pure feedback tones, and engages one of its narrow notch filters whenever it finds one. When all nine bands have been deployed, any further feedback causes the Correct XT to reduce the overall mic gain by 3dB.

In manual anti‑feedback mode, on the other hand, feedback frequencies are only detected and filtered when you hold down both foot switches together. This mode is recommended if any instruments in the band produce pure tones that might be misinterpreted as feedback, or to avoid the unit reacting to feedback from other sources. Pressing and holding the Anti‑FB button when the LED is lit resets all of the filters.

The Gate control is completely automatic and attempts to pull down the mic level between vocal phrases, though how effective this is depends on how much spill gets into the vocal mic from other instruments.

Pitch correction is arranged so that the pot's centre setting gives the most natural-sounding adjustment, but there's range for experimentation if you need a more or less obvious effect. A small display shows whether your singing is being tuned sharp or flat, and the correction sounds pretty benign if set near the middle of range, as suggested. There's no detail provided as to precisely what the control does, but it seems to change the amount of pitch correction rather than the speed, so that in an anti-clockwise position, very little happens, while at its clockwise extreme it pushes your voice all the way to the nearest semitone. It won't reproduce the kind of hard pitch‑quantised yodelling you'll hear on a chart R&B record, though.

Unfortunately, there's no separate output for the non‑pitch‑corrected sound. In my experience, most live engineers avoid sending pitch‑corrected audio to the stage monitors, as this can confuse the singer. If you need a dry feed, you'll have to arrange some way to split the mic signal, or feed the Correct XT from the PA mixer.

The VoiceTone Correct XT turned out to be really easy to use, and the improvement in vocal clarity is helpful in moderation. The Dynamics control shouldn't be over-used, as it provokes feedback and can make the sound unnatural. However, the anti‑feedback effect is pretty good at clawing back a bit more headroom, and the notches are very narrow, so even if it's working hard the results are natural.

While the pitch correction works fine on a technical level, I think it was a mistake to leave out an unprocessed output for feeding the monitor mix, as I find it almost impossible to pitch my singing when all I can hear is a pitch-corrected signal. That said, if you feel your live vocal could sound a bit more polished, but you don't want a complicated multi‑effects unit, then VoiceTone Correct XT might be just what you need.

The VoiceTone Correct XT provides singers with a compact, simple and reasonably priced way to enhance their live vocal sound. Each section provides a useful process, and while most are best not overdone, the overall combination is effective at subtly improving vocal clarity and polishing performance.