Tannoy's Reveal monitors have long been popular among home‑studio owners on a budget. How does the baby of the new range compare with the competition? 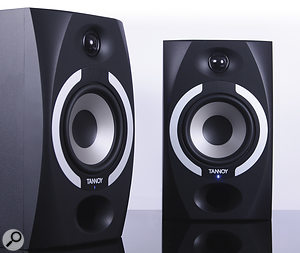 While Tannoy earned their reputation with their classic dual‑concentric loudspeaker designs, the more conventional Reveal range has been a real success story for the company in the project‑studio marketplace. Three new Reveal models have been launched: the active 501A, the slightly larger 601A (which we reviewed back in October) and its passive version, the 601P.

The 501A reviewed here is attractively priced to appeal to the entry‑level home‑studio customer whose recording space might be better suited to a smaller nearfield monitor, but who still demands a reasonable level of accuracy and tonal balance. As the model number might suggest, this little speaker is based around a five‑inch bass/mid-range driver, partnered with a one‑inch neodymium soft‑dome tweeter, crossing over at 2.3kHz. The tweeter can handle highs right up to 30kHz, apparently to improve phase response in the audible band. A 40W amplifier drives the bass/mid speaker, with a separate 20W amplifier driving the tweeter. There's no magnetic shielding on this model, as few users are likely to be using CRT monitor screens these days.

The rectangular MDF case is solid and discourages resonances, while a moulded, sculpted baffle accommodates the cone driver, a flared bass port and the tweeter. This sits in a shallow waveguide to control its dispersion at the crossover point, and to maximise the width of the sweet spot. A black texured finish lends the speakers a businesslike, unfussy appearance, while the silver trim ring and cone of the bass driver adds just a touch of visual interest. A power LED is mounted in the lower edge of the speaker trim ring. The layout is symmetrical to allow for mono, stereo, and surround setups. The speakers are available separately, to cater for these different applications.

Internal bracing of the sides and rear of the cabinet couples to the back of the bass driver, with the aim of keeping the bass end tight and well‑controlled, while the curved edges of the front baffle help reduce cabinet edge diffraction. Overall, the cabinet size is 301 x 185 x 238mm, each speaker weighing a reassuring 7.1kg.

As with most integrated active monitors, the amp pack sits at the back of the cabinet, while the rear panel of the speaker houses a few controls, as well as the IEC mains inlet, power switch and a mains voltage selector for 115V or 230V operation. There's an HF trim control for fine‑tuning the high end (±1.5dB above 2.3kHz) by adjusting the tweeter level, but there's no separate control for the lows. Both balanced XLR and unbalanced TRS jack inputs are available on separate connectors, and there's a rotary control for adjusting the input sensitivity.

The speakers are rated to a maximum SPL of 108dB (per pair at one metre), which is plenty loud enough for nearfield use, and the frequency response is quoted as 64Hz to 30kHz between the ‑3dB points, as measured in an anechoic chamber. 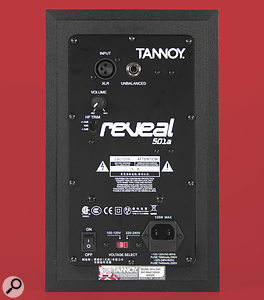 The rear panel houses the audio and power inputs, the power switch, an input sensitivity knob and a three‑position HF‑trim switch.

Any critique of small, ported speakers has to be tempered by the fact that there will inevitably be compromises at the low end. The porting part of the design is there to help prop up the bass response, by tuning the cabinet to the frequency where the driver needs a little help, and though the designers adjust the damping of the cabinet/port system very carefully, to keep the response as flat as possible, the usual trade‑off in a ported system is that low bass notes 'overhang' slightly at the resonant frequency of the box, which robs them of some definition. In most small, ported designs, the port tuning is in the frequency range inhabited by the likes of kick drums and bass guitars, which can add a subjective sense of punch to the sound, but can also be misleading if overdone. The smaller the monitor, the more serious these cabinet‑tuning issues are likely to be.

In this particular case, however, the bass end doesn't seem to be overly hyped, and while there's still a reasonable sense of low end, comparison with larger studio monitors reveals that there's actually very little going on in the depths below the kick drum. In a small room with little or no acoustic treatment, though, this is not necessarily a bad thing, as launching too much bass energy into a small, untreated room usually produces misleading results Double‑checking mixes on headphones becomes more important in this situation, as these give a better idea of what the low bass is really doing. (I also often find that putting even smaller speakers such as these on good stands or isolation platforms really helps keep the bass as tight as possible, and the difference with and without is more noticeable than you might imagine. If you can only budget for basic foam mounts, putting a thick floor tile on top and then a layer of non‑slip matting under the speaker works almost as well as the metal‑topped isolators.)

As long as you don't try to EQ below 80Hz or so (where you'll have difficulty evaluating the effects), these speakers do a pretty good job of presenting the general mix balance, and there's plenty of mid‑range detail too, with good stereo imaging. I found the highs a bit reedy sounding and rather aggressive for my taste, so I dropped the HF switch to its ‑1.5dB position, which improved things a little. However, to my ears the high end sounded more comparable with what I was hearing from my 'grown‑up' studio monitors when I hung a piece of kitchen‑roll tissue over each tweeter. This sweetened the tone slightly, but without making it dull. This was a trick often used on Yamaha's classic NS10s, but I hadn't expected to need to revisit it this century! Without the tissue, I still found the highs a bit too dominant and edgy sounding, which can make for fatiguing listening — though I know some engineers actually prefer a more 'forward' high end. At least the tissue-paper trick costs nothing to try!

Other than my personal observations regarding the high end, which, in wine‑tasting terms, might be described as a little presumptuous, the Reveal 501As hold up pretty well alongside most of the other smaller monitors in their price range. They are well suited to smaller studio spaces, although where more room is available, I'd counsel holding out for the slightly larger 601As, which have a little more bass extension. The 501As deliver well in the mid-range with good stereo imaging; the top end can be tamed easily, if you feel it needs it, by draping a piece of kitchen tissue over (but not touching) the tweeter; and although the low end suffers the inevitable lack of extension found in smaller speakers, this also means it isn't likely to aggravate LF room problems too badly. In brief, I'd say Tannoy have managed to create a useful and affordable little speaker that should appeal to anyone having to work in a small space.

There are many alternatives of a similar size and in the same price range, such as the the ESI Near 05 and Fostex PM0.5 models. Also check out the KRK Rokit RP6, the Alesis M1 Active 520s, the ADAM A3X, Samson's Resolv A6 and the M‑Audio Studiophile BX5A Deluxe.

A practical and affordable speaker for the smaller studio.