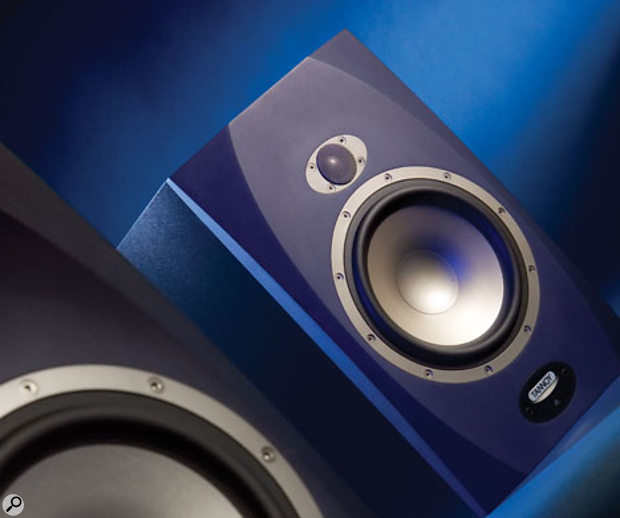 The original Tannoy Reveal Actives were reviewed back in SOS July 1999, and have had a large and loyal following ever since amongst the home-studio brigade. The latest models in the Reveal series are available in three forms: the 6D, which has a six-inch woofer; the 8D (under review here), which has an eight-inch woofer; and the 66D, a horizontal centre-speaker design with a pair of six-inch woofers.

The Reveal 8D is quite a substantial midfield monitor measuring 425 x 262 x 364mm (hwd) and weighing 16kg. The reflex-ported cabinet is constructed mainly from 18mm MDF, although the front baffle is 40mm thick, partly to enable the characteristic corner chamfering which combats cabinet edge-diffraction effects. Internal bracing helps control panel resonances, and a single flared port vents to the rear — so you shouldn't place this speaker too close to a rear wall.

The two drivers are both new to the updated Reveal series, and both are recessed into the front baffle to minimise diffraction from their fittings. The bass driver, despite initially appearing to use a spun-metal cone, is actually a fairly traditional multi-fibre doped-paper design. However, it does feature a very complex four-layer voice-coil assembly to improve the driver's sensitivity. Harmonic distortion has been improved too, through the use of eddy-current damping at the extremes of cone excursion. This is achieved by aluminium flux-control rings around the voice coil and copper caps on the pole pieces.

The titanium-dome tweeter is protected behind a strong grille, and is one of Tannoy's favoured 'wideband' units which boasts a response up to 50kHz. The quoted system frequency response is an impressive 47Hz-51kHz at the -3dB points (measured anechoically), and shows gentle peaks of around 2dB centred on 8kHz and 15kHz, a 1dB scoop-out between about 500Hz and 2000Hz, and a rising bass level below 300Hz peaking at +3dB at 100Hz. Below this, the response falls steeply (typical of a reflex design), although there is also an odd secondary resonance in the response at 50Hz. The smaller versions of this Reveal speaker show similar characteristics. The crossover is set at 2.5kHz, and the built-in power-amp pack provides 120W for the bass driver, with 60W for the tweeter, providing an impressive maximum SPL figure of 117dB (for a driven pair of monitors at one metre).

The 'D' in the Reveal 8D model name indicates the speaker's acceptance of a digital input, in this case a 24-bit coaxial S/PDIF signal via an RCA phono socket. A parallel feed-through socket is provided to route the stereo signal on to a second speaker. Sample rates between 44.1kHz and 96kHz are supported, and a yellow LED illuminates when a suitable digital signal has been recognised and the D-A synchronised. Another miniature slide switch selects the required audio channel from the stereo D-A converter: options are left, right, and mono sum.

I have some reservations about monitors equipped with digital inputs. While many people will doubtless find the feature attractive, the technical disadvantage is reduced D-A resolution. Because in practice you rarely, if ever, listen to the monitor running flat out, some digital attenuation will have to be applied to the signal feeding the digital input, so it won't be using anything like the full 24-bit resolution theoretically available. Furthermore, if that digital attenuation isn't processed correctly with dither, you could end up with nasty truncation distortions. Not nice! It's easier to control monitoring levels in the analogue domain, but the 8D is equipped only with a rear-panel trim control and it only has a range of +6dB to -12dB, so some sort of outboard monitor level control will be necessary. 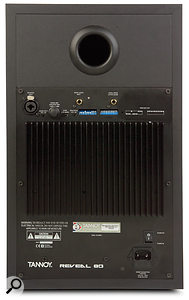 Alongside the analogue and digital connections on each speaker's rear panel are 20 DIP switches which set up the unusually flexible room-correction equaliser.Photo: Mike Cameron

Although the large rear-panel heat sink only became warm during my tests, Tannoy supply a plastic heat shield to protect the user from coming into contact with uncomfortably hot surfaces when adjusting any of the controls. Mains voltage is fixed according to the sales region and, unusually, the IEC socket is an earth-free two-pin type, because the circuitry is double-insulated. The benefit of this is that there is no chance of developing ground loops through the mains safety ground when using this speaker, even if using unbalanced connections. A proper mains power switch is provided adjacent to the mains inlet, but the speakers can be switched to Standby mode from the front baffle by pressing the Tannoy badge. An LED on the rear panel shows when the unit is powered, and one on the front baffle illuminates green when the speaker is fully on, and red when it's in Standby mode.

The amplifier chassis accepts both analogue and digital inputs, although only one source can be active at a time, selected by a miniature slide switch. The balanced analogue input is catered for with a combi jack/XLR socket, and full output is achievable with a 0dBu input signal. The input impedance is surprisingly low at a nominal 600Ω, although this is only likely to be problematic with passive monitor controllers.

For use in audio-visual or satellite-plus-subwoofer installations, the Reveal 8D has a switch to introduce a 12dB/octave high-pass filter at 80Hz. Like most active monitors, the 8D features frequency-contouring facilities to match the speaker's response to the room, but these are unusually extensive on the new Reveal — two 10-way DIP switches on the rear panel offer no less than 2250 different EQ settings! Thankfully, Tannoy offer Activ-Assist software as a free download from their web site, and this can be used on a PC or Mac in conjunction with an omni-directional mic and soundcard. (You can use your own, or purchase a kit of suitable mic and interface leads from Tannoy.) The software generates a test signal for the speaker, the mic captures the in-room response, and the software recommends the most appropriate DIP-switch settings — all very straightforward and user-friendly, and it does help. However, it is no replacement for decent acoustic treatment to control standing waves and reflections.

With the onboard equalisation set 'flat', I powered the speakers up and played some familiar tracks. Like most speakers in my room, the Reveal 8Ds sounded fractionally bright to my ears, but that was quickly tamed using the -1dB high-frequency contour switch. My initial impression was that the bottom end was very well controlled, if a little dry and with limited extension, and the mid-range was very clean and neutral sounding, with a lovely open top. Stereo imaging was excellent and stable, but didn't seem to convey depth information as well as some other monitors in this price range — mixes I know to have excellent depth came across rather flat and one-dimensional. 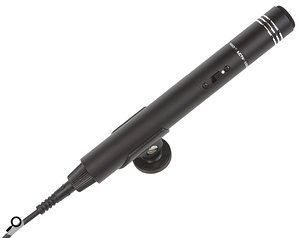 An optional measurement mic and interface cable bundle allows you to use Tannoy's Activ-Assist software to match the response of the Reveal 8Ds to your monitoring room.Photo: Mike CameronBalancing familiar multitrack material was surprisingly easy, there being plenty of resolution throughout the mid-range and top end. The lack of low bass distortion made judging the relative levels of bass and kick drum fairly straightforward too, and I didn't develop any sense of fatigue after extended listening — always a very encouraging sign! Indeed, it became clear quite early on that the 8Ds were surprisingly accurate and revealing monitors, far more so than their UK price would suggest.

Heavy-handed mastering was revealed very clearly as such, while well-recorded and dynamic material was portrayed gloriously, with detail, precision, and involvement. I'd have liked a little more low-end extension, but you can't have everything from a relatively small ported box, and I was A/B-ing them with PMC TB2 monitors which have a prolific but natural-sounding bottom end.

The Reveal 8Ds are blessed with both power and efficiency, allowing them to fill any reasonably sized room with ease and with only mild power compression at full bore. However, I found that they also needed a certain minimum volume to really gel together. At low levels the balance changed significantly — as is the case with most reflex speakers — with low bass all but disappearing. However, this was countered to a degree by the very good mid-range and low mid-range resolution, which allowed the upper harmonics of bass instruments to be heard clearly, giving useful clues as to the true balance, even if the low-bass energy wasn't really there.

Overall, I was very impressed with the Tannoy Reveal 8Ds. These are monitors which have been finely honed over the years, retaining the best elements of the earlier incarnations while benefiting from new technological advances which improve upon their weaknesses. I was a little disappointed with the limited ability to convey stereo depth cues, but overjoyed with the level of resolution and neutrality given the price.

The Reveal 8D offers a good blend of properties: high sensitivity and power handling, low distortion and fine detail resolution through the mid-range, an open and airy top end, and a nicely controlled bass. Add to that an adequate D-A converter to allow flexible interfacing, and unusually comprehensive onboard EQ to aid room-matching, and the Reveal 8D is a very attractive and cost-effective monitor for the home studio.

This latest incarnation of the Reveal includes useful improvements all round, while retaining the cost effectiveness. There are both analogue and digital inputs, and very impressive room-matching EQ facilities. Distortion and resolution have both been improved, as has power handling and overall bandwidth. The new Reveal is destined to remain a favourite of home studio owners.