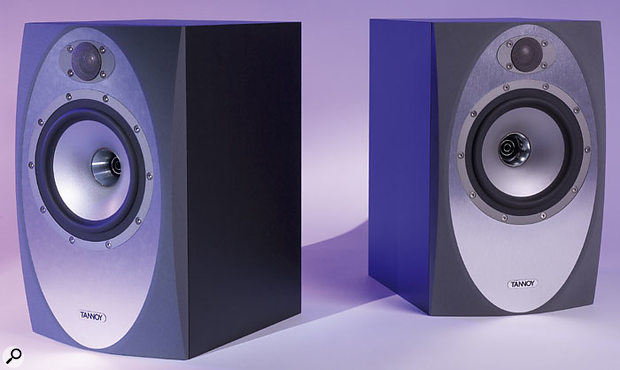 The Precision series sees Tannoy reverting to the dual-concentric designs they're well known for. However, seemingly in contradiction to this, there is still a separate tweeter, but in this design it is a so-called Supertweeter that extends the upper frequency range from where the centre horn of the dual-concentric driver leaves off, pushing the frequency response well beyond that which accepted wisdom would have us believe is adequate for reproducing music to humans. In this range of speakers, the response doesn't tail off until after 50kHz, but Tannoy claim that listening tests confirm that this does make a subjective difference when listening and also ensures greater transient accuracy. Two cabinet and driver sizes are available in the range, with the Precision 6 being reviewed here being the smallest. Where a little more level and low-end extension is required, the Precision 8 should fit the bill.

In designing this range, Tannoy's engineers made extensive use of advanced measuring equipment (laser scanning interferometry, acoustic CAD simulation, and so on) as well as conducting numerous listening-panel tests to see if adding those extra-high frequencies really made a difference. Their aim with the Precision, as with any good speaker, was to deliver wide bandwidth, low distortion, smooth frequency response, accurate phase control, and high sensitivity. Certainly extending the high-end response should improve the phase accuracy at the top of the audible range, so that's probably the main reason for any subjective improvement.

Tannoy's unique selling point has always been their dual-concentric driver design, which has the clear advantage of presenting a point source across the frequency spectrum. The tweeter unit is neodymium powered and ferrofluid cooled, and is positioned on the back of the low-frequency driver so that the sound emerges in the centre of the woofer cone rather than from a separate location. A practical benefit of this is that you get a wider sweet spot than with conventional speakers, but there are a lot of design challenges to get a dual-concentric speaker sounding right. It is intriguing, therefore, that they have combined their dual-concentric approach with a separate Supertweeter. How well this works remains to be seen, because coincident positioning of the drivers becomes more important at shorter wavelengths (higher frequencies) and it's clearly not practical to put the Supertweeter at the centre of the main horn.

Today it seems there is an appetite for active speakers, but with passive models such as these you at least get a choice of which amplifiers to use. With a frequency response of 64Hz-51kHz and a sensitivity of 91dB/W at 1m (no maximum SPL is specified), the Precision 6s don't need a huge amount of amplifier power to generate plenty of sound, but in order to allow adequate headroom for the handling of transients, an amplifier of between 60W and 120W continuous-sine-wave rating is recommended. My tests used a rather nice 100W per channel AVI integrated amplifier, and you need a decent amplifier because, although the speakers have a nominal 8Ω rating, they are actually closer to 6Ω in practice.

The Precision 6s are a departure from Tannoy's usual restrained cosmetic styling and feature an oval brushed-aluminium plate inset in the baffle. A nice grey textured finish is used for the baffle, which is also sculpted to avoid the 'box' look and to help reduce cabinet edge diffraction. The reflex port is located on the back panel, along with the chunky connection terminals (no bi-wiring options) and both the dual-concentric driver and the Supertweeter are set flush into the baffle and secured with cap-head bolts. The dual-concentric driver is a nominal six inches in diameter and uses a paper-pulp cone. Flux control rings are fitted to the LF driver section with eddy-current damping provided via copper pole caps.

At the centre is a one-inch titanium-dome tweeter feeding the horn and the coverage is specified at 90 degrees in both the vertical and horizontal planes. The Supertweeter is also one inch in diameter and uses a titanium diaphragm. In traditional Tannoy fashion, the cabinet is very solidly built and well braced with a massively thick (40mm) front baffle and proper tongue-and-groove joints securing the front and rear panels. Lossy coupling, (which I take to mean some kind of resilient gasket arrangement) is used to prevent speaker vibrations making their way into the cabinet structure through direct contact. The crossover frequency is quoted as being 2.5kHz, but there's no mention of a second crossover frequency between the dual-concentric horn and the Supertweeter, so it's not entirely clear what if any frequency division is employed between the two tweeters. Magnetic shielding is provided for the benefit of those users who haven't yet given their 'glass and copper' CRT monitors to the science museum, and the overall size is just 272 x 440 x 287mm. The sturdy construction is reflected in the weight of almost 10kg per speaker.

Correctly mounted and positioned, the Precision 6s deliver a fairly well-balanced sound with plenty of transient detail, though for my taste the high end gets just a little too splashy and forward-sounding at higher listening levels. This isn't serious, but I also found the bottom end to be a little weak at normal listening levels, with little real punch or depth. I expect the Precision 8s to be better in this respect, but with today's technology it should be possible to get a reasonably satisfying and solid low end from smaller speakers without compromising too much on accuracy. Of course the method of mounting and the position within the room will also affect the low end performance, so if you have a room that normally produces an overblown bass sound, these monitors might suit it very well. If not, I'd go for the Precision 8s, which extend down to 56Hz and are a couple of decibels more sensitive. Stereo imaging is good, and the dispersion characteristics of the speaker provide a usefully wide sweet spot. The sound can get a bit confused when the speakers are driven very hard, but at sensible nearfield monitoring volumes the level of clarity and detail is good.

I don't know how much influence the Supertweeter has on the subjective sound, as there's no way to turn it off, but to my ears, the Precision speakers have more of a conventional two-way character about them, while retaining the wide sweet spot and even dispersion of classic Tannoy dual-concentric designs. My observations regarding the forward sound of the titanium tweeter are personal, as I know many people like their tracking monitors to sound slightly larger than life, but to get a properly balanced low end in my studio I'd probably opt for the Precision 8s or add a subwoofer to the 6s. In other studios, they may well work fine as they are with some careful positioning.

I've never been a huge fan of dual-concentric speakers, but I didn't feel the Precision 6s had the somewhat recessed mid-range that I've noticed on some dual-concentric models. In this respect they probably combine some of the best characteristics of both design philosophies, which makes them well worth investigating for applications where you need a wider-than-typical sweet spot and a good tonal balance across the important mid-range and high-end frequencies. Of course, performance also has to be balanced against price, and the Precision 6s aren't unduly expensive in the UK, yet they are very well engineered. Compared with similarly priced passive monitors, the Precision 6s actually stand up very well and only the lack of low-end weight works against them, especially for those working on dance music where the low end is critical. In all, the Precision 6s turn in a very good performance within their size and price range — as long as they're teamed with a decent amplifier with adequate power to spare.

Every speaker is a compromise, but Tannoy have got a lot right in the Precision series without it costing the earth. The low end lacks a degree of depth, but then this is the smallest driver in the series.