According to Soundorder's publicity, the sample content of Electronic Drums has been taken from Battery Sample Sets volumes 1-4. It's not clear if there is anything new on offer, or if all of the material from those Sets has been included, but on the DVD are four folders labelled Vol 1 to Vol 4, another folder called SFX Kit containing special effects, and one more called Bonus Kits, comprising two 70‑sample kits. 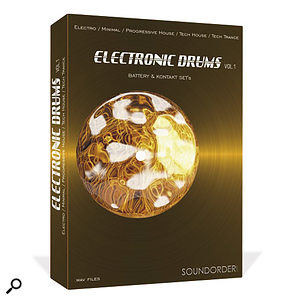 All samples have been compiled using NI's Battery 3 and Kontakt 3, but formatted as 24‑bit WAV files, so they can be used with any program. There are no loops, and so no Apple Loops or REX2 formatting has been applied, but each kit is accompanied by several MIDI sequences that can be dragged straight from the disk into a sequence track. Included on the disk are .KT3 and .NKI files, which will initiate the loading of the drum samples as kits into Kontakt and Battery respectively (where they can be demoed using the aforementioned MIDI files), but there are no similar templates for other setups.

Soundorder's stated mission is to provide producers with unique sounds to keep pace with fast‑changing modern styles, which they say are 'melding together'. Nevertheless, the designers have elected to separate the content into five categories: Electro, Minimal, Progressive House, Tech House and Tech Trance. Strangely, in some Volume folders there are two Electro kits, but no Trance ones, while in other folders there are two Progressive kits but no House ones. So all is not equal, but every style is represented by at least two kits somewhere on the disk.

Finding the best sound for those more unusual jobs inevitably requires a bit of trawling. For example, the right snare sound for a particular Electro track might actually be one classified as Tech House, which is what Soundorder mean when they say that styles are melding together. It's certainly worth an initial perusal of the whole collection to get an idea of the gems located within.

Kits aside, there is a vast number of individual samples in the library, just about all of which sound really good. A drum or hi‑hat triggered in isolation is not necessarily the most inspiring of things, but there is something indefinably useable about Electronic Drums' samples. I suspect some of it is down to the careful use of short stereo delays and other enhancing effects.

The documentation doesn't say exactly what the bonus kits are supposed to be, but they appear to contain classic sounds; not necessarily cutting edge, but useful nonetheless.

I particularly like the SFX folder content. There are plenty of hissy swells and atmospheric builds, which immediately volunteer themselves for use in track intros and breakdowns, and will also be of interest to film music composers.

Anyone making electronic music could save themselves a lot of time and effort by plundering the sounds in this library. There are plenty of other similarly specified products on the market, but this is as good as any in terms of its provision of bread‑and‑butter material. I know I'll be calling on it very soon. Tom Flint