Much like the previous offering from Sonokinetic (Tigris & Euphrates), this collection of samples focuses on what is a relatively niche market but, as with the previous collection, it's quite a large library (around 6GB this time), and it certainly offers something different from the norm. Let's take a closer look. 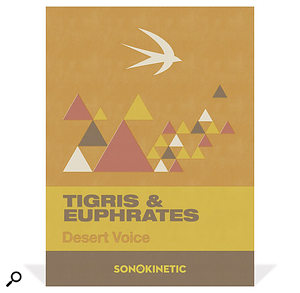 The Kontakt presets themselves are very well thought out, with a number of keyswitches to adapt the samples to the track you're working on. Within each preset, there are keyswitches to shift the key from the default 'A', as well as at least a couple of different tempo choices. It should be noted, however, that the vocals themselves are very freeform and weren't recorded to a click track, so these tempo choices are guidelines at best.

Most of the presets also have alternate versions (with a TS suffix), which map a +/‑40‑percent time‑stretching effect to the pitch‑bend wheel. This is is useful for trying out ideas but, as I mentioned in my review of Tigris & Euphrates, I would probably use alternative (offline) methods of time‑stretching for anything critical. Finally, there is a built‑in convolution reverb with five different impulse responses included: two caves, two mosques and a rather grand Royal Hall. I appreciate the extra level of authenticity that these IRs provide, but I wonder how much use they will get.

The samples themselves are of the same very high standard as the other Sonokinetic products, and it certainly feels as if there is a good selection in this library. While I was playing through the different options available, I had a number of different ideas that I wanted to try out, but then I ran into a small problem. Without having a good knowledge of the scales (or Makams) used in these recordings, it can be hard to make a musical bed that the samples seem to sit with. OK, there are the Western Minor Improvs, but in some ways that's defeating the object of this library. Sonokinetic have gone to great lengths to focus on authenticity and have then diluted it to some extent with the inclusion of the Western versions. I do understand why they have done this, but I fear it may result in something that never sounds quite comfortable.

Ultimately, this collection has much the same strengths and weaknesses as Tigris & Euphrates: if these are the kind of samples you need, and if you have a decent amount of music theory knowledge and skill to work something convincing around them, they offer a great deal of genuine flavour. If, on the other hand, you don't have as much theory knowledge as you might like, uses are more limited. For the price, however, this library still represents very good value. I just wish I knew what the performers were actually saying! Simon Langford