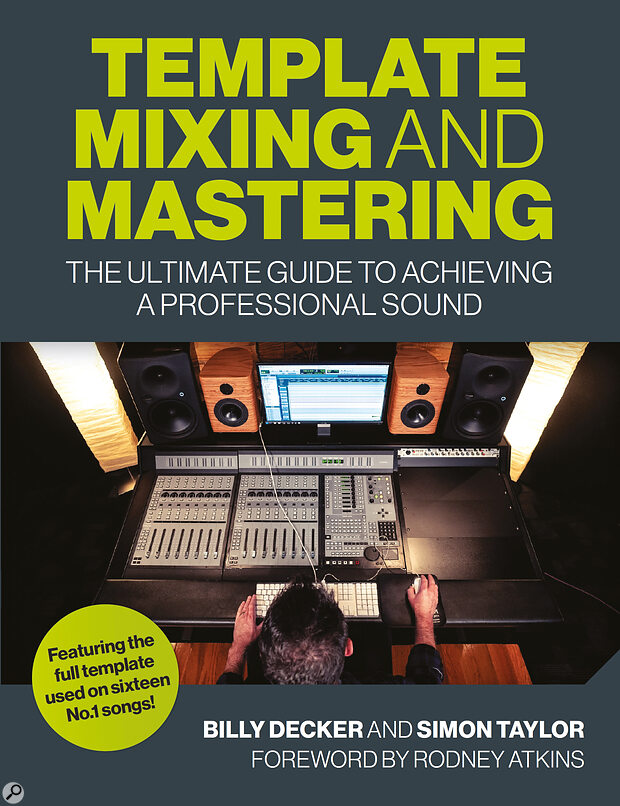 Can you mix a hit record in 45 minutes? Billy Decker can, and in this book he tells you how!

In our January 2018 Inside Track feature (https://sosm.ag/inside-track-0118), Billy Decker explained that he could mix hit songs in 45 minutes. He wasn’t joking. But while he explained a lot about how his DAW template and being based in Nashville (his main focus is country music) helped him mix so quickly, he left many of us scratching our heads. Was it really possible? And if so, how?

Nearly three years later, Decker has teamed up with journalist Simon Taylor to release a book, Template Mixing and Mastering: The Ultimate Guide to Achieving a Professional Sound (Crowood Press, ISBN: 9781785007491), and in its easy‑to‑read, nicely illustrated 128 pages he gives us much more detail. Decker explains that he started looking for a faster approach to mixing because he wanted to be able to spend more time with his family, and in general enjoy a life outside the studio — a desire with which most of us can probably identify! He reiterates the claim that he can now mix songs in 45 minutes to an hour, but adds that he mixes a mind‑boggling 1,000 songs a year. These aren’t just minor projects: Decker has mixed 16 number‑one hit songs and his mixes have sold 25 million records!

Despite the attention‑grabbing 45‑minute claim, Decker’s approach to professional mixing is serious, and not aimed purely at speed but also achieving high‑quality and consistent results as efficiently as possible. It took him close to 20 years to fine‑tune the mixing template that he takes the reader through here in painstaking detail, including each plug‑in setting for each instrument. With chapter titles like Building Your Template, The Master Channel, and Importing Audio and Gain Staging, Decker and Taylor take the reader through every detail required to exactly duplicate Decker’s template — or to Deckerate, as they call it.

Decker stresses that to mix efficiently you should have a thorough knowledge of your DAW software and that you must “learn how to play your DAW like an instrument.” To that end, he insists that you should read your DAW’s manual cover to cover before looking for information on the Internet. He uses Pro Tools as an example, but makes it clear that “it’s the ear, not the gear” and that the specific DAW or plug‑ins you use don’t really matter. Interestingly, he also discourages focusing on “time‑consuming tasks such as colouring tracks for specific instrument groups, renaming tracks or using complicated bus routing,” which interviews suggest many other big‑name mixers find essential.

It took [Decker] close to 20 years to fine‑tune the mixing template that he takes the reader through here in painstaking detail, including each plug‑in setting for each instrument.

In the chapters Drums and Instruments, Decker goes through his settings for drums (he always replaces the kick with three samples, and explains exactly how), bass, acoustic guitar left, acoustic guitar right, electric guitar left and right, steel guitar, piano, organ, and synthesizer 1 and 2. The heavy focus on these instruments immediately points to one of the possible limitations of the template described in the book: it’s tailored to live instruments and country. Decker recognises this, and suggests that his template “contains all the common elements found in popular music and can be used for anything from pop to metal”. But the fact that only half a page of 10 in the Instrument chapter is dedicated to synths shows that electronic sounds simply are not a priority in his world — a pop mixer will still find inspiration, but will certainly want to adapt the template.

This book is accessible and engaging, with plenty of pithy one‑liners that make serious and thought‑provoking points. For example: “View the mute button as your friend and the solo button as your enemy, to be avoided at all costs,” and, “We are not trying to put men or women on the moon, we are just trying to put them on the radio.” Even if you don’t go wholesale for “the Deckerway,” there’s much to learn from the methods, observations and opinions in this book, and it should be essential reading for anyone interested in improving their mixing skills, and streamlining their working methods.

An essential read for anyone who wants to improve their mixing or mix more efficiently.