If you’re into analogue processing but worried about your carbon footprint, Tierra have you covered!

Tierra Audio are based in Madrid, where they manufacture all their gear. The company are keen to stress their eco‑friendly credentials and, to that end, their range of 19‑inch rackmounting products have a front panel made of sustainably sourced cherry wood, with the control legends burned (laser‑engraved) into the surface. As well as the Gravity VCA compressor reviewed here, Tierra offer a FET compressor, a four‑band EQ, a couple of mic preamps and a summing mixer in this range. Each unit ships in a handsome Paulownia wood box, which is strong and rigid. Tierra say this is sustainably sourced also and that, as it is very light, it helps to keep shipping emissions low. They also promise to plant a tree for each unit purchased.

These devices all look very striking and, if the Gravity is typical, they’re even more so ‘in the flesh’ than when viewed on a web page: they’d definitely catch the eye in any studio’s rack. But as nice as the appearance and eco ethos are, the Gravity is first and foremost intended as a professional audio processor, so in this review I’ll consider what it has to offer on that front.

In most respects, other than the aesthetics, this is, rather fittingly given its name, a down‑to‑earth implementation of the classic SSL bus compressor design, by which I mean that the Gravity’s designers have deliberately chosen to keep the ‘bells and whistles’ to a minimum. For example, there’s no external side‑chain input, the switchable high‑pass filter for the internal side‑chain is a fixed‑frequency one, and there are no wet/dry blend control or additional ratio settings, as have been added by some of the Gravity’s competitors. Neither have Tierra opted to include any fancy character‑inducing devices, such as input or output transformers or harmonic distortion generators. Instead, they’ve focused mainly on high‑quality delivery of the traditional SSL functionality.

No doubt some potential users will lament the lack of additional facilities but others might not miss them, preferring a spacious front panel and ease of use. For example, I have in my studio a Serpent Audio SB4001, a 500‑series SSL‑ish VCA compressor, and I love it. It sounds good and has lots of additional features that make it a really versatile device. But I must confess that I don’t use many of its features most of the time — it typically sits on my master stereo bus, set to a 2:1 ratio, quietly doing its thing, tickling the meters as it glues the mix together. So when I sometimes do look for a different setting, its dense forest of knobs and switches can be a distraction. In other words, if you don’t need all that functionality, there’s a lot to be said for Tierra’s keep‑it‑simple approach, which leaves the key controls easy to access and their settings easy to glean at a glance. That said, Tierra tell me that the Gravity will be joined later this year by a (presumably higher‑priced) version, which not only adds the sort of features found in competing products, such as wet/dry blend and stereo side‑chain insert, but also some digital control functionality. So their customers will be able to choose simplicity or sophistication, as they prefer.

So far, I’ve written more about what the Gravity doesn’t do than what it does, which is hardly fair! So what exactly do we have here? Well, it’s a true stereo compressor, in that it reacts to a single internal side‑chain signal and one set of knobs and switches controls both channels. The same THAT Corporation VCA chips as are used in most other SSL‑inspired compressors take care of the gain reduction. 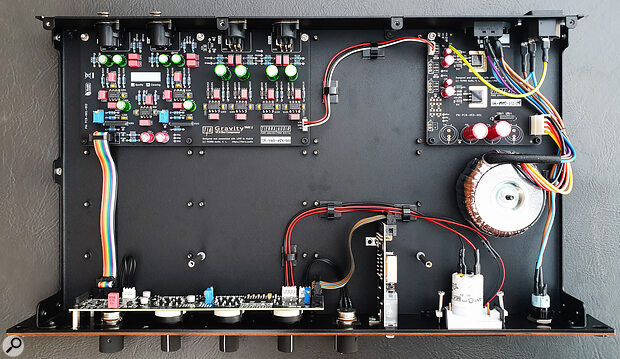 On the inside, you’ll find separate PCBs for the power supply (top right), the main audio processing circuitry (top left) and the main front‑panel controls (bottom).

On the inside, the layout is neat and tidy. The mains voltage is stepped down using a toroidal transformer, and there are separate PCBs for the internal power supply, the audio processing circuitry and the main front‑panel controls, the last of these mounted vertically behind the panel. On the audio and control PCBs, all the components seem to be through‑hole types, whereas SMDs are used in the internal power circuit. The technical specifications are decent for a compressor of this type, and go some way to justifying its price tag: it costs less than SSL’s G‑series Stereo Compressor but it is quieter than, for example, Warm Audio’s more affordable Bus‑Comp (which boasts more features). Whatever the figures say, it certainly sounds clean and quiet when you want it to.

On the front panel are five rotary controls, whose knurled edges make them easy to turn. The leftmost is a ±15dB Threshold knob, to set the level at which gain reduction kicks in. Next is a three‑position ratio switch (2, 4 and 10:1). A six‑position Attack time knob is turned clockwise for a faster attack, with tortoise and hare icons making that obvious. There’s no indication on the unit of how fast the attack is at each setting but according to the published spec these differ from the conventional SSL options, with a choice of 0.18, 0.62, 1.7, 5.3 and 12 ms. It’s all good in practice: there’s plenty of range from fast to slow, and if I turned and listened I always found it easy to dial in a setting that worked.

Gravity both looks and sounds good. It does that ‘glue thing’ very well and because of its relative simplicity it always remains very easy to use.

The five‑position Release switch comes next, again with a hare and tortoise suggesting which way to turn the knob for a faster or slower preset release (0.186, 284 and 540 ms, and 1s). To the left of the tortoise is an Auto release option.

The final knob is a Makeup gain control, with which the user can apply up to 15dB of gain to optimise the output level for the next device in the signal chain. This is joined by three buttons: bypass, HPF SC (side‑chain filter) and on‑off. There’s also a SIFAM gain‑reduction meter with Tierra’s logo.

Around the back are four gold‑plated Neutrik XLR connectors for the inputs and outputs and an IEC power inlet with voltage selector switch, as well as external access to the fuse holder.

On the rear panel, Tierra proudly display their sustainable promise of planting a tree for each compressor purchased.

Wooden It Be Nice

I used the Gravity in my studio for a couple of months and tried it out on a few mixes, taking the time to compare its performance with that of my Serpent SB4001 and a TK Audio unit I had in for review. It performed well in both drum‑ and mix‑bus roles, allowing me to do anything from dialling in a bit of subtle glue, to grabbing and smashing down the peaks and making the material pump with the kick. In short, it was everything I expected. I couldn’t find mention of the high‑pass filter frequency in the literature but it worked as desired, reducing the Gravity’s sensitivity to low‑frequency peaks, allowing me to use more assertive ratios and thresholds before unwanted pumping became evident.

Despite their reputation, these SSL‑ish VCA ‘bus’ compressors do have plenty of applications beyond bus compression, and during the review period I also put it to work on drums, piano, backing vocals and doubled guitars, amongst other sources, and in all cases it did what I asked of it.

Some might think that Tierra could have added more functionality but, as I discussed above, they do have plans for another product that should satisfy those who like to tweak. Meanwhile, the Gravity both looks and sounds good. It does that ‘glue thing’ very well and because of its relative simplicity it always remains very easy to use. Tierra have recently signed a deal with the mixanalog.com remote‑hardware service too, so you’ll soon be able to hear it for yourself. The bottom line is that Tierra Audio’s Gravity is an elegant and appealing stereo VCA compressor: assuming its feature-set meets your needs, it won’t disappoint.

There are lots of SSL‑inspired stereo VCA compressors in rackmount and 500‑series form, with most based on the THAT 2180 or 2181 chips as the gain reduction element. Some offer more functionality, but the build quality and specs of the Tierra unit justify the price. At the more affordable end of the market, you’ll find the Warm Audio Bus Comp‑2 and Chameleon Labs’ 7721. The TK Audio BC1 THD is well worth checking out, as is the Serpent Audio SB4001, which, once you factor in a two‑slot 500‑series chassis, is similar in price to the Gravity but offers more features.

This is a well‑built, nice‑sounding take on the SSL stereo bus compressor concept. The Gravity will undoubtedly also win admirers for its uniquely stylish appearance.