I have to say at the outset that this is a very unusual expansion kit, steering well clear of the more familiar electronic drum sounds in favour of something rather more experimental. It’s based on sounds gathered from drum machines, acoustic percussion, melodic instruments and Foley sounds recorded on location. These sounds were then layered, pitch‑shifted, subjected to granular processing and sometimes circuit bending was also added into the mix. The result is definitely not another TR808! 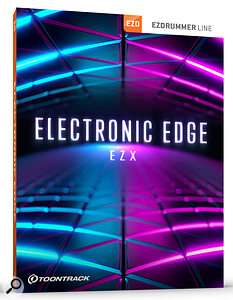 Created by sound designer Richard Venstra and based on a library of 370 sound components with 30 preset kits, Electronic Edge EZX is compatible with both EZ Drummer 2 and Superior Drummer 3. The various sounds are categorised as kicks, snares, rims, claps, hats, toms, crashes, effects, percussion, melodic, subs, risers and atmosphere. The GUI is based on a number of pad controllers where each kit part can be retuned or changed for one of a number of alternatives as required in the familiar EZX manner.

The short melodic sounds make it possible to put together loops that combine elements of both rhythm and melody, aptly demonstrated by those presets that incorporate a sequence of chordal jabs layered over the main beat. These melodic elements are mapped chromatically so that you can set the notes in your own MIDI piano roll editor to whatever suits your song.

Richard revealed that some of the electronic drum sounds in the Electronic Edge EZX were sampled from more obscure drum machines while the Foley recordings involved experimental hitting and scraping of things such as metal fences. Other sources include modular synths, guitars and even a harp.

Each preset includes three different kicks and snares allowing for more rhythmic variation and the familiar Toontrack mixer is present with a dedicated sub fader for adding in a sub‑kick instrument. At the bottom of the mixer is a section that Toontrack call the Edge Engine, with automatable controls that can be used to add further movement and sonic texture to rhythms. The engine has two sections termed Character and Motion. Character utilises various types of distortion while Motion adds a modulation effect. Note that the ‘Pitch’ knob affects every sound in the preset differently.

Electronic Edge does come over as a bit weird and wonderful at first, but the more you explore, the more you come to realise that there’s an enormous amount of potential in there and that it has the ability to slot into many music genres, from pop and dance to chill out and ambient.

If you just tap away randomly on the sounds, you could be forgiven for thinking that Electronic Edge doesn’t sound very drum‑machine‑like, but you only need to check out some of the preset rhythms to be convinced that it is actually a very creative instrument. You can set up rhythms that provide the whole backbone of a composition or combine more melodic/electronic sounds with other EZX sounds you already have to produce your own hybrid rhythms. Yes, Electronic Edge does come over as a bit weird and wonderful at first, but the more you explore, the more you come to realise that there’s an enormous amount of potential in there and that it has the ability to slot into many music genres from pop and dance to chill‑out and ambient. I’m sure I’ll be discovering new facets of Electronic Edge for weeks to come.