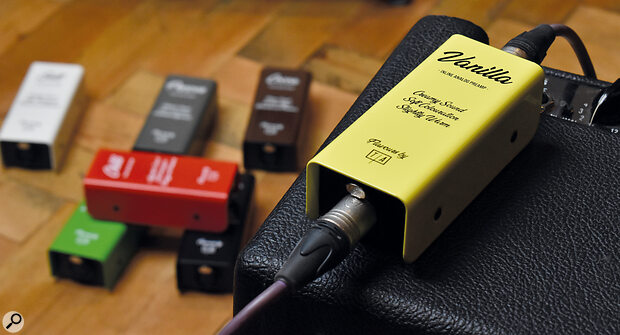 Clean‑gain ‘booster’ preamps are popular accessories for ribbon and moving‑coil dynamic mics — but what if that gain were deliberately made more characterful?

There’s been a big resurgence in the popularity of high‑quality passive ribbon and moving‑coil dynamic microphones in recent years, both for music production and dialogue applications such as podcasting and YouTube videos. Consequently, we’ve also seen more inline booster preamps becoming available. These devices, such as Cloud Microphones’ Cloudlifter and the Triton Audio FETHead, are usually intended to give low‑output passive mics a helping hand by way of applying a fixed‑level but low‑noise boost before that signal reaches the main mic preamp. They typically draw power from the +48V phantom supply on the main preamp.

To a large extent, Tierra Audio’s new Flavours preamps perform just the same task. They require +48V phantom power from a mic preamp to operate but don’t pass it through to the attached mic (so as not to risk damaging sensitive or valuable vintage passive mics), and they apply a boost to the signal. But in one significant respect, they’re very different...

Each of the seven devices in this range has been designed to ‘flavour’ the signal in a different way, and their names are all plays on a culinary theme. The options range from the subtle enhancement yet pretty clean gain of Salt through to full‑on distortion courtesy of Chilli and Truffle, with a handful of gentler tone‑shaping options (Mint, Vanilla and Cocoa) filling out the ‘menu’ along the way. Tierra explain that the basic concept is to combine the provision of the extra gain that low‑level dynamic mics often need with the option of adding a sonic ‘flavour’ to the clean‑sounding preamps of a desk or audio interface — rather in the way that you might sometimes opt to use different boutique mic preamps for their character.

Physically, the Flavours are rugged, compact devices, about half the size of a typical DI box, and they have no user controls; there’s just an XLR on one end for the mic input and another at the other end for the output to your mic preamp. Inside, they’re all completely different designs (rather than being a case of pairing the same booster with different ‘saturation’ circuitry), so as well as stamping a different sonic footprint on the signal they also apply different amounts of gain. The maximum boosts range from 23dB, which is fairly conventional for an inline preamp, to a whopping 53dB. (Note that the precise gain figure for each box depends on the impedance of the attached microphone.)

When the Flavours first arrived at my studio — Tierra kindly sent their whole range to test and audition — I happened to be in the middle of a drum recording session, and thought I’d throw a couple straight into action. But with the above considerations of gain and power in mind, I found that before I could really get to grips with them I first had to spend a little time contemplating how best to implement them into my studio setup.

Using them initially on some more low‑risk ‘character’ mics seemed like a fun way to start, but the only such mic option I had available which didn’t require phantom power became far too hot, level‑wise, for the main mic preamp when plugged into one of the Flavours. I have an Audient mixing console and various outboard preamp options here, but none of those are able to supply +48V phantom power when they’re set to receive line‑level input sources (which would be an obvious way to accommodate the higher level). So with those preamps I had to use an attenuator to use the Flavours on anything loud, such as drums. With my little RME Babyface audio interface, however, I encountered no such problem: the preamps in this (and various other interfaces) can provide +48V while padding the mic amps down to accept line‑level signals.

Once I’d got over these initial teething issues, though, I ended up having a lot of fun while trying out the different boxes on various sources. They definitely offer something different and useful in a variety of recording situations. As well as dropping them in on a few real recording sessions I conducted some more controlled tests, in which I auditioned each of the Flavours on the same four sources: a voice recording, an acoustic guitar and a couple of different drums. In the next section of this review, then, I’ll give you a little explanation of how I got on with the ‘main courses’ before offering you some more general thoughts on the range as a whole towards the end. 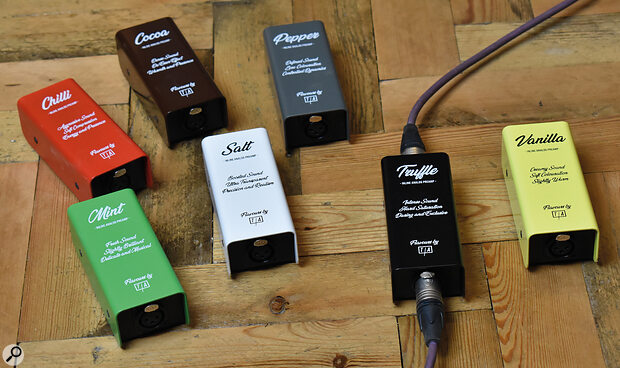 The full range of Tierra Audio’s Flavours. Each model includes an aide‑mémoire description of its tonal characteristics on the top of its sturdy metal housing.