Is this latest addition to the Thermionic Culture flock something for the company to crow about? 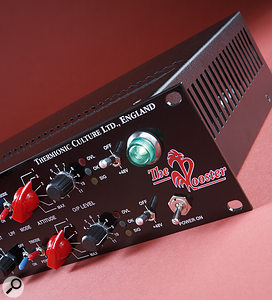 Photo: Mike CameronTo appreciate anything built by UK company Thermionic Culture, you need to know something about the philosophy of their founder, Vic Keary, a larger–than–life character who relishes building larger–than–life tube–based audio gear. Vic set up the all–tube Chiswick Reach studio in West London and then moved into small–scale manufacturing with engineer and co–founder Jon Bailes, who oversees the mechanical engineering and visual aspects of the products — all of which seem to have curiously bird–related names — before being joined by studio engineer Nick Terry. They have a philosophy of not using any solid–state circuitry in the signal path, although, of course, they may use it elsewhere, such as in power supplies. The team confess to being obsessed with tube–based audio equipment and they all seem to dislike the sound of modern solid–state circuitry. I'm not sure anyone has dared to ask them what they think about digital audio!

Although many Thermionic Culture circuit designs hark back to the pre–vintage days of the mid 20th century, they've done whatever they can to reduce noise and distortion to meet the needs of today's user, through the use of high–quality resistors and capacitors where appropriate, selected tubes and carefully laid–out PCBs and hand wiring.

The Rooster, which I'm reviewing here, is a hefty 2U, twin–channel, tube–based 'mic/line plus DI' preamp with EQ. It also borrows heavily from the distortion section of the company's Vulture.

The mic/line XLR connections are on the rear panel, while the unbalanced instrument DI is on the front. Each channel has its own phase (polarity–invert) switch and 48V phantom–power switch. The control panel is an unfussy black, with clear legending, chunky knobs and traditional toggle or rotary switches. Even the power light is analogue, although there is a small concession to modernity in the form of simple red–green–yellow LED output–level metering. The rear panel is also very straightforward, with XLRs for the mic and line inputs, XLRs for the two channel outputs and an IEC mains inlet with adjacent voltage selector. Unlike most professional studio equipment, the output was unbalanced on the review model. Since I completed the review, a balancing–transformer version has been released too, and it may even be possible to retrofit the new option (you'd need to speak to distributors Unity Audio about this). Given that cable runs from the unit are likely to be short, the lack of balancing shouldn't present a problem, though, providing you take care to avoid ground loops. Inside, a torroidal transformer in its own screened area powers the circuitry, and all the tubes are fitted with screening cans.

The input stage employs a custom 1.2kΩ–input Sowter audio transformer, feeding an ECC81/12AT7 tube — so this part of the circuit is based on a fairly traditional tube preamp topography. The EQ section that follows is designed for sweetening or fine–tuning rather than surgical reconstruction, with a broad bass–lift control peaking at 60Hz, a switchable mid/high–lift (operating at 2.5kHz band–pass, 4kHz band–pass or 7kHz shelving) and a separate mid–cut, centred at 700Hz. There's also a six–position rotary bass–cut switch, which is derived from the circuitry used in the company's Earlybird 2 preamp, and a switchable low–pass filter to trim off the excessive highs.

So far it all seems very polite but no Thermionic Culture product would be complete without a dose of quirkiness, and you'll find plenty of that in the 'Attitude' section. The Attitude circuit uses a 5725 tube to create distortion effects, which range from subtle and musical to very obvious and confrontational. This is accomplished by switching the tube between triode and pentode modes via a front–panel toggle switch, and then setting one of six negative feedback amounts via the rotary Attitude switch. In the triode position, the tube, which runs from a reassuringly high–voltage HT rail, provides controllable distortion depending on the amount of feedback applied. This arrangement results in the amount of distortion being very low when the Attitude switch is set to minimum. When pentode mode is selected, the third–harmonic distortion becomes more dominant, and with the Attitude control set to one of its higher positions the distortion becomes much more obvious. At the maximum setting there's no negative feedback at all, so the amount of distortion is quite high — especially if the input level is also turned well up. After all this mayhem, the signal passes through an ECF80 output stage, which acts as a low–impedance output buffer.

Although a great deal of thought has clearly gone into the design, the only way to evaluate a preamp such as this, where distortion is used as an effect, is to do so subjectively. On paper, most tube–based audio gear tends to look worse than its solid–state counterparts, because tubes are inherently more noisy and produce more distortion. However, as long as the noise floor is low enough that it doesn't stand in the way of making good recordings — and the distortion is musically satisfying — the results can be sheer magic.

Little Red Rooster: the red 'Attitude' switches and green analogue power light lend the Rooster a distinctive appearance.As a mic preamp, the Rooster has that punchy character that's associated with certain transformer–input mic amps, and this comes across even when the Attitude switch is at its lowest setting in triode mode. There's no apparent distortion when the Rooster is used in this way but the sound still has a character that's missing from a typical solid–state mixer mic–amp. As you increase the Attitude setting, the negative feedback is reduced, so that the gain increases — which means you need to back off the output level control to keep the output signal steady. At the highest Attitude setting, some distortion may be noticeable if the input gain is also set fairly high, but in the main it comes across as a thickening of the sound that works well on certain voices and also adds a nice sense of stability to DI'd bass guitar parts.

Switching to pentode mode ups the ante on the distortion front, although the low–numbered settings can still sound nicely smooth and musical. At higher settings and with a lot of input gain, the distortion becomes rather more obvious, to the point that it can sound quite crunchy. In the main, I'd avoid going this far, as large amounts of distortion without the low–pass filtering of a typical guitar speaker cabinet can sound unpleasantly harsh, but at least the option's there if you're working on death–metal vocals! Fortunately, the six switch settings plus the input gain setting give you plenty of control over how much tube coloration is added, and for treating drawbar organs or tine pianos (such as the Rhodes) the pentode mode may be exactly what's needed to capture that retro overdriven sound. For more subtle warming, the triode mode produces more of a genteel tape–saturation type of effect.

I have to say that I really like the sound of the EQ section of this preamp. Forget 10–band parametrics — these few simple controls are perfect for sweetening vocals and most instruments, and make it easy to produce a sound that punches through a mix without being thin or harsh. As with most well–designed analogue equalisers, you may only need to make quite small adjustments to achieve the desired result — and even when you need more extreme settings, the sound still stays musical and well focused.

Thermionic Culture like to keep things traditional: all you get on the rear panel are mic and line inputs and line outputs on XLR, an IEC mains input and associated voltage selector. Two version of the Rooster are available, with one having unbalanced outputs and the other, slightly more expensive one having transformer–balanced outputs.At the time of writing, there was no on–line manual or even spec sheet for the Rooster, but that doesn't really matter, because it's how it performs in a real–life situation that's important. Providing the input stage was run at a sensible level, I could detect no noise issues in typical studio close–miking applications, and the tonality has a lovely, vintage directness to it that helps sounds sit well in a mix without your having to resort to unseemly brightness to make them heard. For a 'clean–with–character' tonality, the triode mode excels, whereas the slightly more ebullient pentode mode works well on instruments that traditionally rely on a bit of distortion to complete their sound — some styles of bass guitar, electric piano, organ and electric guitar, for example.

The EQ section did exactly what I wanted without strangling the sound, as some less sophisticated equalisers and plug–ins tend to do, so I've no complaints at all in this department — and even the limited number of frequency options didn't seem to get in the way of great results. Adding in some low end, I was rewarded with depth and punch without everything turning into a woolly mess. The mid controls felt wide and sweet and, with the 7kHz setting, the high/mid control brought out the clarity and transparency of a sound without making it brittle or harsh. What this boils down to is that you can add a lot of this EQ if you need to, without compromising the integrity of the sound, even though in most cases you probably won't need very much to get the job done.

A processor such as this one may seem costly, but when you consider that you get a pair of seriously characterful mic preamps as well as an effective retro–style analogue equaliser in an all–tube format, the cost isn't really over the top. In fact, many US–made boutique tube processors will cost rather more without offering the same vintage vibe.

While the designers would clearly love to live in an all–analogue world, a preamp like the Rooster could bring some welcome analogue character to a digital studio, and if you're in the market for something a bit more exotic to use as a front end, this could be exactly what you're looking for.

There aren't that many two–channel preamps in this price range that offer both an all–tube signal path and EQ. If you want to audition alternatives, you might like to consider the Summit TPA200B and Tubetech MP1A, although you wouldn't get the EQ that you do with the Rooster. The SPL Channel One may also be worth considering: it gives you the EQ, and a few more bells and whistles to boot — but you'd need two of them, as you only get a single channel.