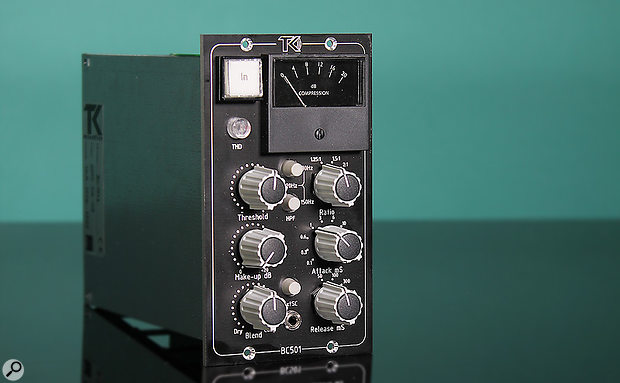 This SSL-inspired compressor boasts excellent performance and some useful additional functions. What’s not to like?

Swedish manufacturers TK Audio have featured several times in the pages of SOS, and the subject of this review is essentially an API 500-series version of the BC-1 MkII stereo compressor that Matt Houghton reviewed a few years ago (http://sosm.ag/tkaudio-bc1mk2). That rackmount model is now designated the BC1-S, but the changes from the earlier model are trifling and relate to the use of a different In button and provision of a mains on-off switch on the front panel.

In addition to its revised form factor, though, the BC501 variant brings some additional and most welcome features to the party, taking the familiar SSL G-series bus compressor concept and stretching it even further to enhance its versatility. In common with most other SSL compressor homages, the BC501 occupies two 500-series slots and presents the user with an uncluttered and familiar layout. A square, illuminated On button sits alongside the white-on-black gain-reduction meter, with the first of the new features just below. This isn’t mentioned in the quick-start manual or the extended online version (which seem to be derived directly from the BC1-S manual), but it’s a simple illuminated push-button that introduces a fixed amount of second-order harmonics to give a richer sound character.

The user controls are very similar to those on the BC1-S, with detented rotary controls on the left-hand side to adjust the threshold (±20dB), make-up gain (+20dB) and blend (parallel compression mix). The right-hand controls are rotary switches for setting the ratio, attack (0.1 to 120 ms in 10 steps) and release (50ms to 1.2 seconds in five steps plus a 50ms/2s dual-release auto mode). A minor difference from the BC1-S is that two extra ratios have been included (1.25:1 and 6:1, alongside 1.5:1, 2:1, 4:1 and 10:1). Also, although the UltraFast Attack option has been dropped, the shortest attack time of 0.1ms is still more than fast enough for the vast majority of applications. Two grey push-buttons nestled between these knobs expand upon the BC1-S’s 6dB/octave high-pass side-chain filter, with turnover frequencies of 80 and 220 Hz in addition to the former’s 150Hz and Off modes. A third button activates an external side-chain input via a front-panel 3.5mm socket. 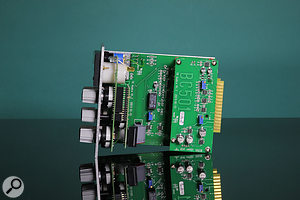 The circuit boards are based around miniature surface-mount versions of the THAT chips used in most SSL-inspired designs.Internally, the construction is to high standards, using surface-mount devices (SMD) throughout. The electronically balanced inputs and outputs are handled via THAT 1246 and 1646 line driver and receiver chips, respectively, and the main audio paths are processed exclusively via NE5534 and NE5532 op amps. Individual THAT 2181 Blackmer VCA chips perform the heavy lifting as the gain-reduction elements for each channel.

The side-chain circuitry is all built around TLO74 op amps and a THAT 2162 Dual Blackmer VCA. The whole system operates on internal ±12V rails, regulated down from the API rack’s standard ±16V provision. Current consumption is specified as 110mA from the rack’s positive supply and 90mA from the negative rail, both comfortably below the nominal 130mA limit originally specified by API for this format (modern API racks and many third-party ones can supply considerably more current).

Installing the BC501 in a standard API Lunchbox was no more fiddly than fitting any other dual-slot unit, and involved only mild swearing! I started by running a standard set of bench tests using an Audio Precision analyser and found the BC501 to perform superbly. Maximum input and output levels are around +26dBu, although the sound starts to become audibly crunchy above +24dBu. With the 10:1 ratio selected the threshold control range is -17 to +25 dBu and the make-up gain control boosts the output level by a maximum of +21dB.

Pressing the THD switch raises the THD ratio from an impressively low 0.001 percent (with a +4dBu input) to an audible 0.35 percent, but the distortion is mostly second harmonic, with strong fourth and sixth harmonic components. My signal-to-noise-ratio measurement, at 92dB (ref +4dBu, 20Hz-20kHz), was a little lower than the published specs, as was crosstalk, which was 85dB at 10kHz. However, the frequency response measured ruler flat, reaching -0.1dB at 12Hz and 60kHz. 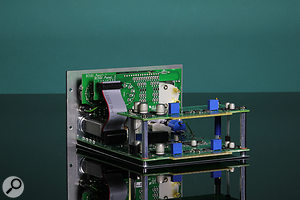 Interestingly, the nominal threshold seems to move with different ratio settings. The three lowest ratios all have very gentle knees that start around 10dB lower than the rather harder knees of the 4:1 and 6:1 ratios. The 10:1 (limiting) ratio slope starts 4dB higher still, with a very hard knee. I presume it is because the threshold point varies that there are no absolute calibrations around this control. 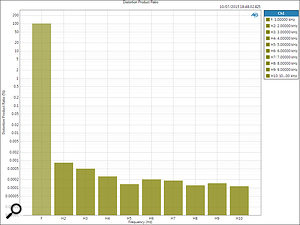 This plot shows the very low harmonic distortion components with the THD switch off.I’d have to echo Matt’s opinions of the BC1-S. It works best as a ‘glue’ compressor when used with low ratios and small amounts of gain reduction. The two lowest ratio options allow very low thresholds, which means that the entire dynamic range of a mix will be continuously compressed to some extent, and I find that sounds far more transparent than using a higher ratio and just squashing the louder peaks. A major benefit over the SSL bus compressor that inspired TK’s design, though, is the provision of a blend control, making parallel compression very easy to set up. In this configuration the higher ratios and much heavier gain reduction really come to the fore, particularly for bringing out power with clarity in a drum-bus signal. 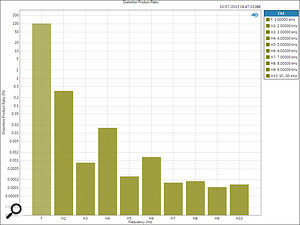 And this one shows how the even harmonics are significantly higher when the THD switch is on, particularly the 2nd, 4th and 6th.Working in its standard mode, the BC501 is an extremely transparent compressor, as most designs using the THAT 2181 VCA are, but the inclusion of the THD switch introduces a subtle richness, adding some interesting character, particularly on transient-rich sources. The extra side-chain-filter turnover options are useful additions, too, providing greater versatility in reducing the authority of low-end elements in controlling the gain reduction. Matt asked for more side-chain EQ options in his review of the BC1-S, and it seems TK Audio listened! 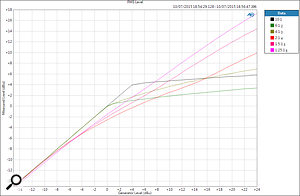 This transfer plot shows the compression ratio slopes and threshold points. The three lowest ratios (pink curves) have very gentle knees starting around 10dB lower than the 4:1 And 6:1 ratios which clearly have much harder knees. The 10:1 ratio starts 4dB higher still with a very abrupt knee.TK Audio have revised and improved the original BC-1 in several stages, from the original MkI, to a MkII, the BC1-S and now the BC501. Apart from some minor discrepancies between published and measured noise and crosstalk specs, I really can’t find anything to fault with this latest incarnation. It takes the much-loved SSL bus compressor concept and embellishes it with great skill and practicality. It is a very clean and fast compressor, with good versatility, excellent build quality and attractive pricing. If you’re looking for a versatile stereo compressor to fit your 500-series rack, and which builds on the classic SSL ‘glue’ idea, TK Audio’s BC501 should meet your need.

There are a number of stereo compressors available for the 500 series, including SSL’s own interpretation of their stereo bus compressor, and several variations on that theme including the Dramastic Audio Obsidian, Serpent Audio SB4001, Alta Moda Audio Hippo, Smart Research C1LA, IGS Audio S-Type 500 and Elysia Audio Xpressor 500.

Boasting great performance, the BC501 adds some useful bells and whistles to improve on a tried-and-tested stereo VCA compressor design.