It’s easy to pigeonhole spring reverbs as guitar amp accessories, but back in the pre-digital era, AKG built a no-holds-barred studio spring reverb system called the BX20, which occupied a large wooden case and cost in the region of $3500. It was designed with twin reverb ‘tanks’ or spring sets, and clever design minimised the twanging and ‘sproinging’ artifacts usually associated with spring reverbs. 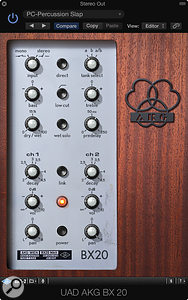 The result was a truly organic-sounding studio reverb with a depth and richness quite different from that of a plate reverb. The two sets of spring units within the BX20 were contained within a cylindrical housing suspended inside the wooden case using a pendulum arrangement to isolate the springs from external mechanical vibrations. Electronic motional feedback rather than mechanical damping was used to change the decay time and the springs themselves were carefully chosen to provide the appropriate distribution of reverberant energy.

Now UA have added a plug-in emulation of the BX20 as part of the 8.3 software update, and as always, you get a limited time to try it free of charge. As you’d expect, the UA engineers have modelled AKG’s original TTL (Torsion Transmission Line) reverb mechanism in great detail, and in most respects have remained true to the original design, though as a concession to practicality they have added a few useful controls such as channel linking, wet/dry mix, pre-delay, and an 80Hz low-cut filter. The plug-in ships with the usual roster of artist presets.

Following the original dual-spring-tank layout, the plug-in offers switching for the individual reverb tanks (you can use either or both), Baxandall-type bass/treble tone controls set at 150Hz and 5kHz respectively, and switching so that the input can either be true stereo or both channels summed to mono. If only tank A or B is selected for stereo use, the software creates a stereo output based on the character of the tank selected — unlike the original, which could only offer stereo by using both tanks. Tank A has a warm character while tank B has a brighter quality, but both sound very full and dense.

Another non-original feature is the Direct button, which uses some clever modelling to reduce the contribution of the direct sound passing through the spring, which means the wet sound is now even wetter than wet. In practical terms, this reduces any ‘phasey’ artifacts that might otherwise occur when the dry sound is mixed with the delayed version of itself passing through the spring, and can significantly benefit transient sounds such as percussion.

Though pre-delay wasn’t a feature of the original, tape machines were often hooked up to provide it, so here a pre-delay of up to 250ms is available. Each spring tank has a decay time individually adjustable from 2.0 to 4.5 seconds and the volume of each can also be adjusted independently, as can the pan position.

The Link feature links the Decay, Volume and Pan parameters for both channels to simplify adjustment, while Mix does just as you’d expect. In Link mode, the pan pots move in opposite directions, producing a wider or narrower stereo image.

Apparently the plug-in code employs both algorithmic and convolution elements, which means that it takes a moment or two for the effect to change if you switch the decay times as indicated by the flashing power lamp. It also gives the plug-in a higher latency than most other UA plug-ins, and though this is not a problem when using it when mixing or as a send effect, we’re told that it can flag up an error when used for input processing with an Apollo interface as its latency may exceed the Apollo’s compensation range. The manual gives instructions as to what to switch off if this should happen, though I can see few situations in which you’d want to record directly through the plug-in. Using it as a send effect within Apollo poses no problems.

As promised, the reverb has a big sound that is dense, complex and shows only the slightest hint of spring-like wobble. It works on everything from vocals to drums, and like a plate reverb, the lack of a ‘real’ sonic signature means you can add as much or as little as you may need without worrying that the listener is going to interpret the sound as a specific physical location, such as a concert hall or cave.

In two-tank stereo mode, the ability to set one reverb time longer than the other creates a nice sense of movement, and the maximum 4.5 seconds decay time is more than generous enough for any normal application. Short to medium settings tend to be the most useful, though I have to admit to liking that ‘short on the left, long on the right’ stereo treatment. If recreating a vintage sound appeals, the AKG BX20 provides a very practical alternative to a plate reverb and I can envisage it getting a lot of use. Paul White

Your Questions Answered
6 days 10 hours ago.