Cobalt Saphira is the first of Waves’ new Cobalt series of plug-ins. It’s an enhancer effect, but one which goes way beyond conventional harmonic enhancers by allowing the user extensive control over the type and balance of the added harmonics. There’s also a tape-modulation emulation section, which seemingly replicates the nuances of tape wow and flutter.

Cobalt Saphira seems to have the most pronounced effect when used across entire mixes or dense submixes, but there is enough flexibility to allow it to make useful changes to individual tracks. Though the processing may sound complicated, and under the hood it probably is, the user interface allows for relatively simple exploration. There are separate sections for controlling odd and even harmonics, plus the tape-like pitch-modulation. 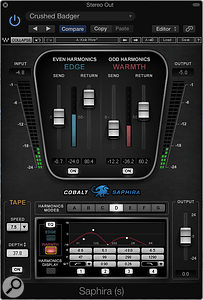 The Send fader in each of the two harmonic-generation sections acts as a drive control to determine how much harmonic augmentation is generated relative to the level of the input signal, while Return determines how much of that harmonic signal is added back into the mix. Harmonic mode buttons A to G offer seven different balances of the added odd and even harmonics. The section labelled Edge deals with even harmonics and Warmth does the same for odd harmonics. The contribution of both sections can be modified via individual four-band EQ sections that act only on the added harmonics. Note that the gain structure includes a degree of automation so that as you increase the Send level, the output level remains relatively consistent, which makes it easier to judge the effects of adjustments and helps avoid the trap of thinking loudest is best.

Tape modulation is the third processing section and includes a menu of five tape speeds ranging from 7.5 to 30 ips, including two in-between settings that tape machines don’t have. Depth is adjusted in percentage, and values above 50 percent tend to be quite audible. The trick is to set the depth so that the speed modulation is almost subliminal — just enough that you miss it when it’s gone.

The EQ sections allow you to configure Saphira to brighten the highs like a typical harmonic enhancer/exciter or target the lower frequencies to add warmth. I got the most musical results using the Edge section to target the highs and the Warmth section to address the lows, though you have full flexibility to do as you wish in this area. When setting up you have to use your ears to ensure you don’t overdo the drive setting, though if you audition this with the return level turned up, it’s usually pretty obvious when the signal gets compressed and gargly sounding. The key to getting good results is to listen to the effect of processing in context with the rest of the mix.

The tape modulation section adds a sense of space and movement to the sound, but you have to be careful to keep the modulation effect subtle. Fortunately there’s a very useful library of factory presets covering many standard applications, such as adding depth to the low end of a mix or adding focus to the highs of a piano or acoustic guitar. Overall, Saphira does a great job at making things sound subtly bigger, wider, deeper and clearer than they do without it, and it only takes a few minutes to get used to the controls. There are many plug-ins that purport to add a sense of analogue finesse using digital technology, but this one is far more flexible than most and certainly has an endearing analogue-like sound. If you feel the need for a ‘more of everything’ tool, Saphira could be just what you are looking for. Paul White