Need to use samples to rescue a dodgy drum recording? Toontrack's neat utility will generate MIDI hits and map them to the virtual instrument of your choice. 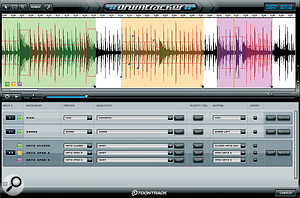 Drumtracker runs on Mac OS and Windows platforms and operates as a stand‑alone drum replacer application that can work with multiple drum tracks, generating MIDI data from each track for triggering suitable drum samples. While aspects of the program are automatic, the user can adjust threshold and filter settings to achieve better separation (less false triggering) where spill is present, and it is even possible to work with a complete drum mix, though the user has to do quite a lot of work to identify which hits belong to which drums!

As with most processors of this kind, the source signal is treated with filtering to reduce the effects of spill from instruments at radically different pitches, and then with a threshold detection system similar to a gate. Drumtracker can assign velocity values to the MIDI data based on the amplitude of the original hit. Each detected hit is shown by a vertical line on top of the waveform display of the source audio, and the threshold points are shown as red lines that can be adjusted simply by dragging. Where the drum part fluctuates in level, the threshold can be varied for different parts of the file. Once hits have been detected and converted to trigger points, the user can then delete, add or move them, as well as adjusting the velocity of individual hits. Finally, the result can be exported as a MIDI file to use in the original DAW project.

Drumtracker's window is a simple affair, with a waveform display at the top and an area below to determine how the software deals with each part. The first stage is to use the Add Input function to locate each desired drum audio file, which may be mono or stereo, in WAV or AIFF format. The next stage is to create or choose a MIDI Template: choices on offer include EZ Drummer, Superior 1, Superior 2, General MIDI, GM Extended Addictive Drums, BFD1 and BFD2. By default, this comes up with simple MIDI note numbers, so if you know what note you need for a specific drum, you can select it directly. To extract more drum types from the selected input, you can select Add Instrument and enter the appropriate settings, though as I said at the outset, separating sounds from a mixed drum file isn't easy, especially where several drums may be close to the same pitch, so some additional manual work is invariably necessary. If you want an easy life, it is far better to work from the individual close‑mic tracks where these exist, as you then have little or no extra work to do.

Once the desired drum files have been loaded in, they are displayed as separate strips in the Input section of the window; the waveform panel above shows the currently selected part. The Part tool is used to select what section of the drum track to process: where you have more than one articulation in an input file, such as a snare track that includes a section of side‑stick playing, you can identify the sections separately and enter the desired target MIDI parameters.

When you place the cursor before the desired region and hit Play, any detected events are shown as vertical coloured lines, the height of the line being proportional to the MIDI velocity. The same results can be achieved using the Render button, which processes the whole file as fast as possible but without the possibility of listening to the result until you're done. User adjustment consists of varying the threshold and filter parameters, though the latter are quite basic, providing just high- or low‑pass filters and high or low Q. There seems to be no way to specify a filter frequency, nor to listen to the filter output during adjustment. However, you can audition the trigger points that the software detects by assigning inbuilt drum sounds or clicks to them, then using a balance fader to adjust the monitor mix between the MIDI-triggered sound and the original drum file. You can also send MIDI to an external sampler, should you wish to, through for verifying the process is working properly, the sounds provided are fine.

Along with the main filter, each part you select within an audio file can be given its own filter setting by clicking the 'F' at the bottom right of the waveform display, but these filters seem to have the same fairly basic adjustment parameters as the main filter. My own preference would have been for variable high- and low‑pass filters for each part, with a means of auditioning the result.

Manual editing of the detected trigger points is done using modifier keys, and clicking on the trigger 'lines' allows the user to disable wrongly identified beats or insert new triggers where a hit was missed. Hits can also be moved and their MIDI velocity adjusted, so the results that can be achieved come down to your patience. When the trigger points have been tweaked to your satisfaction, you can output the results as MIDI data to use in your original project. You need to set the required tempo for the MIDI file so that it matches the original DAW project; where a tempo map was in use, you can choose to include the 'conductor' track in the MIDI file so that all the MIDI hits sit correctly on the timeline.

By default, Drumtracker uses the MIDI Type-1 file format, where all the sounds are contained in a single MIDI file. However, you can specify MIDI Type-0 format if you want to create a separate MIDI file for each drum or cymbal. There's also a 'Split Instrument' option that saves separate MIDI ﬁles for each articulation of each specific instrument, such as open and closed hi‑hats or snare centre and snare side‑stick. The PDF manual includes a list of keyboard shortcuts, and it may be worth printing these out and sticking them to your desk, as they can save a lot of time.

Not So Dumb Tracker

Overall, the operation of the software is reasonably intuitive once you've read through the manual, though I think the on‑screen controls could perhaps be better arranged, in the order of workflow. I also had the program quit on me a couple of times (on an Intel Mac running OS 10.5) for no obvious reason. As it is, some functions are accessed within the Drumtracker window and others from the menus at the top of the screen, which can be confusing at first. If the system has a weakness, though, it is that the filters aren't really flexible enough to separate out different hits of roughly the same level, so the software is only really effective when dealing with close‑miked sources — which, admittedly, is how it is designed to work. I also missed having a filter 'listen' mode, as I like to know what the detection part of the system is 'hearing'.

Providing you don't expect miracles, such as flawless automatic separation of drum sounds from an overhead or room mic, Drumtracker actually does a great job with minimal fuss, and the timing of the end result is generally spot-on. Admittedly, there is room for improvement, but it's still early days and the product may well evolve over the next few revisions. Many band demos suffer from poor drum sounds, so even replacing the close-miked ones and leaving the original overheads to carry the cymbals (ideally with some low-cut EQ) can make a big difference. Drumtracker is a very useful tool and is very attractively priced, so if you are struggling with drum sounds and have some good samples at your disposal, it could make a real difference to your recorded results.

The big‑name alternative is Wavemachine Labs' Drumagog and it is priced accordingly, but other solutions include TL Labs' TL Drum Rehab (for Pro Tools) and KTDrum Trigger for VST users on Mac or PC. Windows‑only VST applications also include Peak Freak and Replacer.

Drumtracker is designed to turn close‑miked drum tracks into MIDI data, and includes sufficient filtering and gating to avoid false triggering in most normal situations. It also allows manual editing of the detected data, so you can even get a good result with difficult material if you're prepared to put in the time. Given its price, it strikes a good balance between ease of use and ability.