To create Dream Machine, EZKeys engineers Mikael Stenberg and Viktor Hansson combined samples of a Fender Rhodes Mark 7 with those of a Schiedmayer Celeste, having discovered that the two instruments complimented each other extremely well. Many of the product’s presets also include layers of marimba and xylophone samples, which expand the sound palette even further, but it’s still possible to work with just the samples of the Mark 7, or the Celeste, on their own. 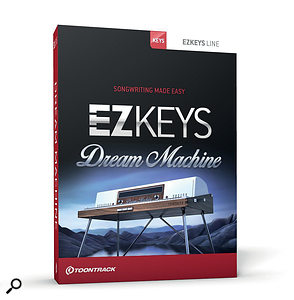 As is the case with all of the EZKeys range of instruments, the interface is extremely easy to understand. This time it features a beautifully rendered image of a vintage electric piano, with a pop‑up Velocity Control panel on the left and a Tuning panel for transposing the key range on the right. All the other buttons are just for show, apart from three grey ones that represent soft, sostenuto and sustain pedal settings.

A standard EZKeys sequencing window sits at the foot of the interface, which allows the user to record and edit a performance, but it also features a group of very important knobs for adjusting things like tone, the level and speed of a tremolo effect, and the level and decay time of a reverb. These controls change according to the preset: Organic Pump, for example, offers an Air Pressure level knob, while Club Wah includes Wah and Phase controls.

My starting point was the MK VII Basic preset, which is not unlike the shimmering keyboard sound on ‘Riders On The Storm’ by the Doors, especially when a run of notes is played. A similar preset called Mellow MK VII draws nearer to a sound that was used for jazzy, ambient backgrounds in countless ’70s movies, usually starring Clint Eastwood or Charlton Heston.

In contrast, the solo celeste preset called Celeste Basic reminds me of the lead sound in the classic ‘Left Bank Two’ track, best known as the Vision On ‘Gallery Theme’, although it has slightly less presence than the one used in that recording. Of course, a certain amount of presence can be added by adjusting the nodes on a time‑versus‑level graph found in the Velocity Control panel, but it isn’t capable of dramatically altering the fundamental character of sounds. Generally, Dream Machine offers flexibility through sample combinations, rather than sample manipulation tools.

The instrument’s programmers have used the marimba and xylophone samples to introduce warmth and a percussive attack to some of the patches, but their application is generally very subtle. I couldn’t help wishing for a mixer page giving me control over the relative balance of the four sampled instruments, but in fairness the range and quality of the existing 47 presets is already very good.

Dream Machine is a lovely‑sounding instrument, which should interest anyone who is a fan of jazz‑influenced film score music from the ’60s and ’70s, or indeed any funky, jazzy, psychedelic or soulful rock and pop from that era. It’s my new favourite virtual instrument and I’ll be using it at every opportunity.