The Mellotron is not lacking in software emulations, so what does EZkeys Mellotoon have to offer?

Is there room in the world for another Mellotron emulation? Perhaps the way to justify one would be to give it a different set of features from anything that’s come before. More sounds? No, that’s been done. Better sampling of the original sounds? No. Studio effects? No. Creating new mixes? No. A low–speed switch? No It’s all been done. Whether you love it or hate it, the Mellotron is perhaps the most sampled electronic keyboard in existence. Yet here’s another Mellotron soft synth. What can it offer that we haven’t seen before?

Although it can be purchased as an instrument in its own right, Mellotoon can also be obtained as a sample expansion for the Toontrack EZkeys line, which already includes grand and upright pianos, as well as electro–mechanical pianos, pianets and clavinets. Consequently, Mellotoon is a bit of a departure for Toontrack and, whereas the hammered, plucked and sucked instruments concentrate on authenticity, Mellotoon, well, doesn’t. For example, the Mellotoon GUI offers a sostenuto pedal and a damper (sustain) pedal and, when you play and hold notes, you no longer need to count to eight; Toontrack has looped the sounds so that you can sustain them ad infinitum. Philosophically, I have nothing against this; in fact, I quite like it. But when the company’s press release states that, “the Mellotron pulled [its sounds] off a magnetic tape loop that ran inside the keyboard” I’m less than impressed. 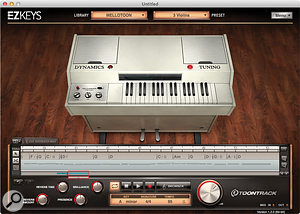 The Mellotoon library offers just 15 sounds that were sampled at Swedish Radio’s Studio 9 using a number of tape frames as sources and a Mellotron M400 as the playback instrument. It’s a slightly strange selection; most people would agree that the strings, brass, choirs and flute form the fundamental Mellotron palette, and the recorder is always welcome, but you might query why the piano and vibes were included whereas none of the organs make an appearance. Five mixes and four additional presets called Pads are also provided, and I suspect that someone had fun creating these. All of the sounds extend beyond the Mellotron’s 35–note range, with 22 semitones available below and 19 above, although the highest octave is wrapped around from the one below, so that’s really seven above, for a total range of 64 semitones.

Every sound features a preset effects chain, generally with reverb plus a selection from tape delay, EQ, filtering, phasing, panning, rotary speaker and tremolo, although the last five of these appear only in the mixes. It’s a limited selection and you never have more (nor fewer) than four parameters at your disposal, but I found that they do a more than passable job. You can save modified presets and recall them at a later date, which will be useful if you’ve tweaked one to be ‘just so’ for a given mix. But be aware that you can’t always defeat the effects fully, which may be frustrating if you want to play sounds through an external chain. 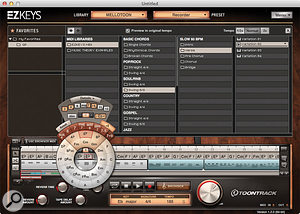 Clicking on the Browser button reveals the EZkeys MIDI library, and invoking the chord wheel allows you to modify chords in interesting ways (or replace them) to add interest to Songs.The blurb claims that Mellotoon offers “uncompromising dynamic response for great playability” and, although the Mellotron had no conventional velocity sensitivity, you can pop open a panel on the top surface of the instrument to reveal EZkeys’ standard velocity sensitivity controls. These allow you to define the minimum and maximum velocities used, and to draw a response curve to best match your master keyboard and playing style. Underneath a similar panel on the other side of the instrument lie a set of controls that allow you to adjust its tuning, but adjusting these while holding a chord has no effect; they are not equivalent to the tuning knob on the Mellotron which, while represented in the GUI, is a graphic affectation, as are the drawings of the original voice selector and volume control.

In addition to playing sounds, you can divide Mellotoon’s capabilities into two broad areas: building/editing songs, and using it as a phrase generator within your DAW.

Pressing the Browser button reveals its MIDI library, which contains short sequences divided into categories such as Pop/Rock, Soul/R&B, Country, Gospel and so on. These are then further subdivided into song sections such as Intro, Verse, Chorus and Bridge, and these are then further divided into Variations. Clicking on a Variation loops it, and moving between those in a given section allows you to hear how they would work if strung together. Having decided which you want to use, you can then drag them into the Song Track to build a song. 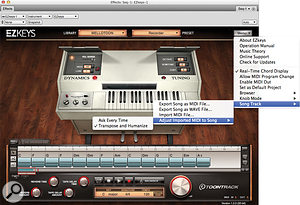 Opening the two panels on the top of the instrument reveals the dynamics and tuning controls. And a pleasantly shallow menu system provides access to many facilities including at least one — humanise — that isn’t even mentioned in the manual.It’s a simple (and simplistic) way to approach music, but there are additional tools that allow you to add interest. In addition to basic facilities such as transposition, altering the time signature and adjusting the tempo of the whole song, you can add chords, generate quasi–random (but not silly) chord sequences, transpose, truncate and randomise phrases, cut them up and reorder the bits, copy and paste chords and phrases, and merge bits back together again. You can also modify chords by choosing inversions, changing the root, and adding or subtracting notes using the chord wheel. Be honest, Dm9 over Bb with a flattened fifth can be much more interesting than plain old Dm.

Of course, you can also play chords and melodies directly into the Song Track. If you do so while running the stand–alone version, there’s a metronome that allows you to choose the percussion instruments playing the clicks and to determine their volumes. This disappears when you use the plug–in, perhaps because your host software should offer the same functionality.

Finally, you can drop existing MIDI files into the Song Track. If multiple channels exist within the file, EZkeys asks which of these you would like to load, then mixes your selection and identifies the chords, after which you can modify the results as before. There’s also a ‘humanise’ feature for softening pre–quantised sequences. To stress–test this aspect of Mellotoon, I dropped in some Emerson, Lake & Palmer tracks, and it handled them without problems. I can’t imagine why you might want to hear all the parts of ‘Lucky Man’ played simultaneously on Mellotron vibraphone, but if you do, this makes it possible.

Toontrack claim that Mellotoon offers “excellent sonic accuracy and authenticity”. That’s daft. The sounds are looped, they’re velocity sensitive and, as I worked my way through the library, I discovered that they had been cleaned up to remove the bumps and graunches of the original tapes. It’s reasonable to view these changes as improvements but, as a recreation of the original, Mellotoon is neither accurate nor authentic. Furthermore, a few of the tonal discontinuities I discovered as I played up and down the keyboard felt wrong. So I turned to the Half-a-’Tron (which contains the original tapes of many of the Mellotoon sounds) and compared the two. I was right: the tones of some of the notes were different, so I’m wondering whether ‘bad’ notes on the playback instrument were recreated by transposing adjacent ones. What’s more, I suspect that the headblock of Studio 9’s Mellotron wasn’t aligned correctly. Comparing (for example) Mellotoon’s Flute against the real Mellotron revealed that it suffers leakage from the violins that lie alongside it on the standard M400 tape frame. Despite this, or perhaps because of it, Mellotoon exhibits much of the character of the original! 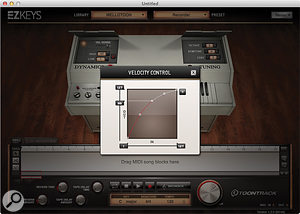 Although the Mellotron had no velocity sensitivity in the usual sense, Mellotoon links velocity to loudness, and even allows you to draw your own response curves.Turning to the songwriting aspects of Mellotoon, I dragged copies of my favourite Variations into the Favourites column in the browser, and further organised them by creating sub–folders within which I grouped (and renamed) those used within each Song. So far, so good, but I was somewhat surprised to find that EZkeys offers no multi–channel capabilities whatsoever, so there’s no question of layering your Mellotron parts over other EZkeys sounds. In many ways, this is fair enough; EZkeys is a songwriting tool, not a MIDI sequencer. But a single track of chords is far better suited to piano sounds than to Mellotron sounds, so I doubt that I would ever use Mellotoon in isolation.

Next, I loaded it into Digital Performer, where it worked without fuss. I was able to sequence it in the usual fashion, as well as drag my test songs into DP as parts of more extensive MIDI sequences. You can also set Mellotoon to follow the host and send its MIDI data to the host when playing, which allows you to record sections or whole performances into the DAW, and I liked its ability to export the current song as a WAV, which could prove interesting when arranging audio rather than MIDI within the DAW.

One more thing: the manual embedded within Mellotoon was written for the original piano–based version of EZkeys. Although it explains that, “the exact visual representation of the keyboard will vary from one EZkeys product to the next”, I feel that owners deserve at least an addendum that explains the instrument that they’ve purchased.

Toontrack make some lavish claims in their generic manual, stating that, “a world–class piano player, songwriting partner, arranger and a meticulously sampled piano, EZkeys marks the next step in creative music software”. Those are bold claims, so let’s be honest: Mellotoon is nice, but it’s not a world–class Mellotron soft synth. It’s only when you start to treat it as a songwriting aid that it makes sense. Novices will be able to learn from the phrase library and from the ways in which chords can be strung together and modified, and even experienced writers may be able to clear a creative block by stepping through the Variations. Inevitably, these facilities are better suited to piano sounds, so it might make more sense to buy Mellotoon as an add–on to an existing EZkeys product. But, either way, Toontrack should be applauded for attempting something different and finding a niche in such a crowded market.

When discussing Mellotron soft synths, there’s only one standard for comparison, and that’s GMedia’s M–Tron Pro. This costs more than Mellotoon but, together with its Streetly Tapes, Chamberlin, Optigon and Vako Orchestron expansion packs, it offers a monstrous library of sounds embedded within an instrument that features dual layers, HP, BP and LP resonant filters, an LFO, dedicated filter and amplitude envelopes, and ensemble. However, none of the competition offers the songwriting tools included within Mellotoon.

An introduction to music theory is included with Mellotoon. I particularly like the section on chord types, which explains the differences between major and minor chords, dominant and suspended chords, as well as half–diminished and diminished chords. It even ends with an explanation of what power chords are, and why they work. The final sections show all of the chords used within EZkeys, and provide an introduction to double–sharps and double–flats, explaining why modern musicians tend to find ways around using these. It’s not everyone’s cup of Earl Grey, but many musicians might benefit from reading this.

The EZkeys family is a set of songwriting tools and educational aids, and I can see it helping novice songwriters to develop their skills. However, one of the piano versions would be more appropriate as a primary tool for this, so I’m happier viewing Mellotoon as a plug–in that generates a pleasant range of Mellotron (–type) sounds and allows you to create Mellotron parts for existing compositions.

£103, upgrade for owners with existing EZkeys products £54.95. Prices include VAT.