Small Upright is part of Toontrack’s EZkeys range of products which includes a virtual pipe organ, Mellotron, Clavinet D6 and Pianet N, grand piano, vintage upright and contemporary upright. The advantage of the small piano is that it produces a tighter and lighter sound than larger instruments, helping it to cut through in mixes. The piano Toontrack sampled is a six–octave instrument called Bambino, made in the 1970s by Swedish company August Hoffman. 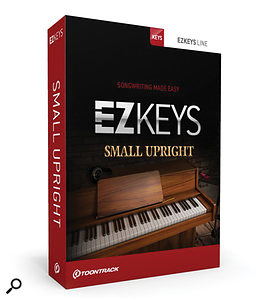 The virtual instrument’s interface is attractive and reasonably straightforward. At the top is a drop–down menu of presets which also stores user patches. Below that there’s an interactive graphic of the piano set in a cosy studio. Its keyboard can be played with a mouse or controller keyboard, and those users who do not have three expression pedals can engage the virtual ones by clicking on them. Then, hidden behind the virtual woodwork of the piano, are controls for a compressor and tuner, all of which can be revealed by clicking on the words Dynamics and Tuning.

Below the graphic is a sequencer section (common to all EZkeys products), enabling the user to select and edit chords and drop them into a sequence. It’s also possible to insert MIDI sequences from a menu of style presets and, as one would expect, it all syncs to the host sequencer’s tempo if required.

Sound shaping tools are represented by level knobs for Reverb and Reverb Decay, EQ and Noise, but there’s no way to access any other parameters. Toontrack have made some things a little too easy in this regard, and it wouldn’t hurt to have a pop up panel with more editing options.

Quite a few virtual piano instruments I’ve had the chance to use over the years have been let down by clicks and odd resonances appearing on certain keys or in particular key ranges. The Bambino is mostly free of such problems, although a few keys do click louder than others when they come back up. Luckily this can be fixed by lowering the Noise knob level. Around the C4 area the piano’s resonance tends towards being just a little metallic, but it’s very subtle and should be considered an aspect of the instrument’s character rather than a fault. For me the instrument is at its best between C5 and C7, where it is clear, pure, has lots of presence, but is not at all thin sounding. There is a definite lack of bass and resonance down the lower end though, so Small Upright is probably not going to be a frequent choice for rendering solo performances. Nevertheless, it does work very well in compositions where other instruments are packing out the low end and when the piano has to poke through higher up, in and around guitars, strings and vocals.

To sum up, the Bambino is probably not the best all–round piano instrument, but in many very common recording situations it works extremely well.