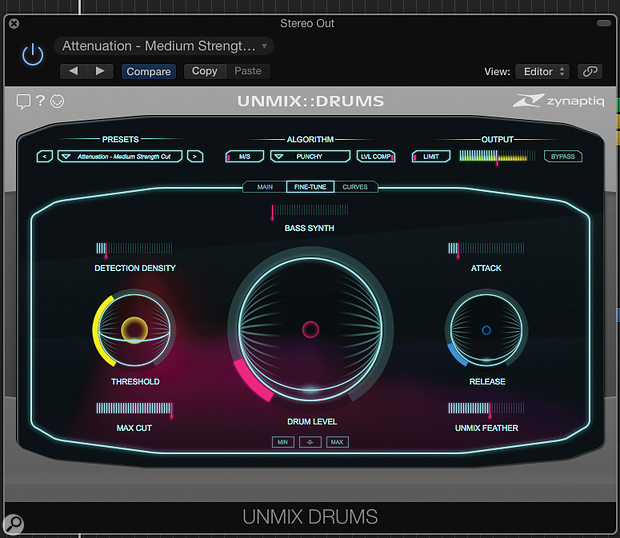 We’ve all had those ‘if only I could get rid of the drums!’ moments. Zynaptiq’s innovative plug–in promises to do just that.

Zynaptiq were founded by Stephan Bernsee and Denis Goekdag, who specialise in achieving the seemingly impossible — and doing it rather well. We’ve already looked at their Unveil plug–in, which reduces the amount of reverb on a recording, while Unchirp tackles the ‘chirpies’ generated by over–processed audio and Unfilter removes filtering effects, such as comb filtering, resonances, or excessive equalisation. Now Zynaptiq have come up with Unmix:Drums, which achieves the clearly impossible task of changing the balance of drums in a finished mix, or even removing (or at least very significantly attenuating) unwanted drums or drum spill from recordings.

The plug–in, which is authorised using the iLok system, supports operation across all the common plug–in platforms at sample rates up to 192kHz, and has a surprisingly simple, multi–level GUI with a dynamic display showing what the processor is doing. All the rotary controls follow the Zynaptiq Trackball Slider paradigm, meaning that although they look like knobs, they can be adjusted like faders. A circular ring displays the value of the parameter while the diameter of a centre disc also grows as the value increases. A MIDI Learn function lets you easily assign MIDI controllers in DAWs that support this way of working.

The Main page of the graphical interface comprises a header bar where operation can be switched between Punchy and Smooth modes. Smooth is the more natural of the two, while Punchy produces a tighter, snappier sound. Stereo or M–S operation is also selected here, as is automatic level compensation, and it’s possible to save and load presets too. In the main section of the screen are controls for Threshold, Drum Level and Release, and these are often all you’ll need, especially if you start with a suitable preset.

The higher the Threshold setting, the more ‘drum–like’ a sound has to be to respond to the Drum Level control; setting too low a Threshold value can lead to percussive instruments such as strummed guitars and slapped basses being misinterpreted as drums. For more accurate detection, the Threshold can also be made frequency–dependent using the more advanced Curves view.

The function of the Release control depends on whether you are aiming to attenuate or boost the drums in the mix. In Cut mode, it sets how long the drum gain takes to return to normal after a hit has been detected. When boosting drums, it adjusts the decay time of the boosted drum as well as the length of the reverb tail boosted along with it. The manual suggests that Release time in Cut mode should be set as low as possible while not allowing any drum ‘tail’ to become audible.

The Fine–Tune page of the interface includes the same controls as the first but with a few additional sliders, so you could consider it to be an ‘advanced’ view. Detection Density affects the detail in the drum sound being subjected to processing; lower values make the algorithms more selective. As a rule, this control should be set as high as possible while still ensuring all drum events are controlled. Conceptually, the Attack control is not unlike its counterpart in a conventional compressor, but under the hood it is rather more complicated. Lower values mean the sounds included in the processing need to be more obviously ‘drum–like’ in nature, whereas higher values process more low–frequency energy at greater risk of including non–drum sounds.

The Unmix Feather control smooths out the ‘edges’ of the processing. It works in both time and frequency domains, and depending on its setting, Unmix:Drums will attenuate slightly less or slightly more than just the detected sounds when cutting, and add more or less drum reverb along with the drum hits themselves when boosting. Denis explained this feature by telling me: “The control is bipolar, and behaves differently between cut and boost. We recommend setting it at slightly above 50 percent, basically the default value. For boost, higher values give more reverb (lower values give less); for cut, higher values attenuate ‘more stuff around the drums’, while lower values leave ‘more drum–ish stuff’ in place.”

There’s also a Max Cut control that limits the total amount of attenuation that can be applied, which can produce a more natural sound when attenuating drums that are part of a complex mix. Bass Synth, meanwhile, adds synthetic low end to the drums when their level is boosted, affecting frequencies below 200Hz: the added subharmonics roll of at 6dB/octave and are cut below 20Hz.

The Curves view offers the most detailed control over the behaviour of Unmix:Drums, providing graphical curves with editable breakpoints superimposed on an analyser–type display. Using the curve editor, it is possible to make the Threshold, Drum Level and Release parameters frequency–dependent, which can help in separating the drums out in more complex material. The display area shows differently coloured plots of amplitude against frequency for the detected drums, non–drum sounds and the output signal. Tabs beneath the editor select which curve is active for editing, and each can be bypassed independently. 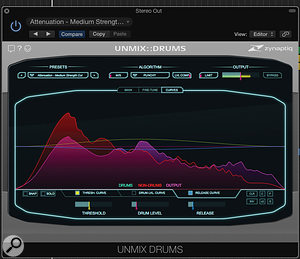 In Curves mode, it is possible to make the detection, cut/boost and time constants frequency–dependent.Manipulating the Threshold curve makes it possible to target specific frequency ranges for processing. It is also possible to raise the threshold level at specific frequencies to help avoid processing sounds that lie in a different part of the spectrum from the drum sounds you are working on. The Drum Level curve adjusts the extent to which boost or attenuation is weighted towards a specific frequency range, while the Release curve makes it possible to change the release time at different frequencies; you might, for instance, want to shorten the mid–range release time to exclude more vocals from possible processing. A Solo function allows the effects of the filters to be monitored, and the curves can also be inverted.

Getting your head around some of Unmix:Drums’ more arcane parameters can take a while, but most of the time you can just use your ears to see how far you can go. Mileage varies depending on the initial material, and Zynaptiq rightly suggest first fixing frequency–response issues or excessive reverberation before applying the processing. Unmix:Drums is clearly a case of “The impossible we can do at once, miracles take a little longer” — but it is seriously impressive. It can struggle with particularly difficult material, but in most cases you’d be amazed at how effective it can be. If you try to push it beyond its comfort zone, you’ll start to hear artifacts in the non–drum material, but that’s true of pretty much any form of spectral processing.

In a typical mix, using just the first–level ‘easy’ controls, it is straightforward enough to re–balance the drum part in a mix by a few dB either way — and with only a little more work, you can reduce the drum level to the point that any new drum part would completely obscure it. I happened to be working on a mix where a cello part suffered from a lot of drum spill, and I was able to reduce the spill dramatically while not messing up the cello sound.

Old–school types like me will appreciate these spill–attenuating capabilities, while EDM producers and remixers will love the way it can strip away the drum parts from existing mixes. Given that you can try Unmix:Drums free for a limited time, there’s nothing to lose by giving it a shot — you might just find it invaluable.

While extreme settings can produce audible artifacts, it amazes me that this plug–in is able to achieve to much while doing so little damage to non–drum audio!