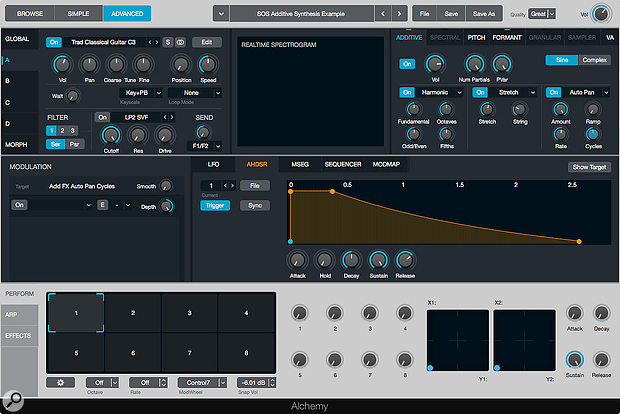 Screen 1: A guitar sample can be tweaked beyond all recognition using Alchemy’s three additive element effects slots. Here I am using the Harmonic, Stretch and Auto Pan effects.

We explore the additive synthesis capabilities of Alchemy in Logic Pro X.

There are many different ways to use additive synthesis in Alchemy. In this month’s Logic workshop, we will use the additive engine to process an existing instrument audio file to give it a more synthetic quality. We will then take a more painstaking approach, designing a sound from scratch by layering partials.

The additive synthesis engine in Alchemy can be used to mangle existing samples in new and interesting ways. Let’s create a patch that will have a synthesized flavour while retaining the amplitude envelope of the instrument sample we began with. In a new Logic project, create a new Software Instrument track and on it add an instance of Alchemy. Alchemy will load up with a default preset that already contains numerous effects and modulation assignments. From the File menu, choose the Clear option. This resets everything, so we have an instance of Alchemy with no effects or modulation assignments. Go to the Advanced view and then to Oscillator A, click on the Wave pop-up menu field and choose the Import Audio option. This takes you to a browser interface where you can import samples from your Alchemy sample library or your ESX24 factory sample library. Go to Places, click on Alchemy Samples and then navigate to Guitars/Acoustic Guitars/Trad Classical Guitar/TradClassicalGuitarC3.wav.

At the bottom of the browser, set the Input Mode to Additive, make sure Formant is lit, then hit Import. Alchemy will analyse the guitar note and resynthesize it from a number of partials. You can then view this in great detail by going to Oscillator A and pressing the Edit button to bring up the Source Edit Window, and then clicking on the Additive button. You can edit the partials here, but we’ll leave that until the second half of the article, as it’s rather complex and Alchemy has a much simpler interface for fun tweaking. 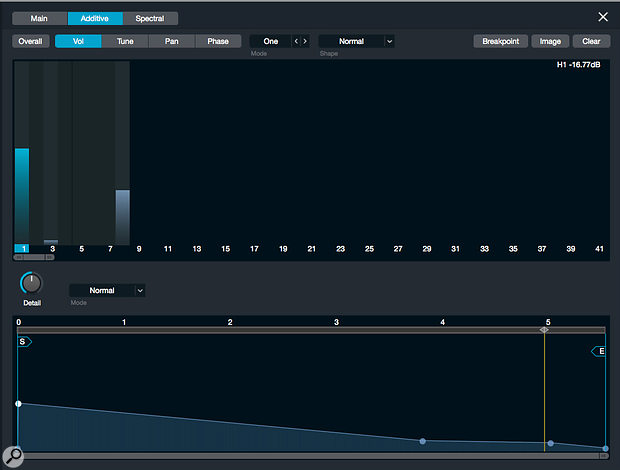 Screen 2: With the Overall button off, the Mode set to One and Partial Bar set to display Volume, we can use the Partial Envelope section to draw in a different envelope for each partial. Here the first partial is selected and its volume envelope will gradually fade out over a five-second period.

So, to mangle your sample you will need to close the editing window and return to the Advanced view of Oscillator A. Go to the Additive panel at the right-hand side.

The first parameter that is fun to tweak is the Num Partial knob. Turning this to six partials dulls the sound for a lo-fi effect, whereas setting it to 600 gives a result that sounds very similar to the original file. Beneath the Num Partial’s knob are three additive element effects processing slots. Note that these are not traditional audio effects, but modules that affect groups of partials in interesting ways. Set the first slot to Harmonic and turn the Fundamental knob to the left to attenuate the level of the first partial, thinning out the sound. Now turn it to the right to increase the level of the first partial. This adds more weight to the sound. Next, move to the Odd/Even knob and turn this to the left. This accentuates the odd harmonics, making the patch sound more hollow; conversely, turning the knob to the right accentuates the even harmonics, brightening the sound and pulling it up an octave.

Let’s now move across to slot two, and from the drop-down menu, add the Stretch effect. This stretches the tuning of the partials upwards creating different timbral effects. Set the Stretch parameter to eight percent and the String parameter to 30 percent to give the patch a pronounced bell-like quality. Lastly, in slot three add the Auto Pan effect and set the Amount to 100 percent, the Rate to 5.36Hz, the Ramp to 0 and the Cycles to 64, to produce a shimmering modulation effect that adds stereo width to the patch (see Screen 1).

Now you have familiarised yourself with some of Alchemy’s more immediately tweakable parameters, let’s move on to more complex editing. Additive synthesis is built on the principle that any waveform can be made from a bank of sine-wave oscillators (for more information see Gordon Reid’s Introduction to Additive Synthesis, in his Synth Secrets series: http://sosm.ag/jun00synthsec). The potential accuracy of an additive synth’s representation of a given waveform is directly related to the number of sine waves it uses. Luckily for us, Alchemy can use up to a massive 600 sine waves per oscillator, set by the Num Partials knob we used earlier. We will now use the additive engine to make a sound from scratch. 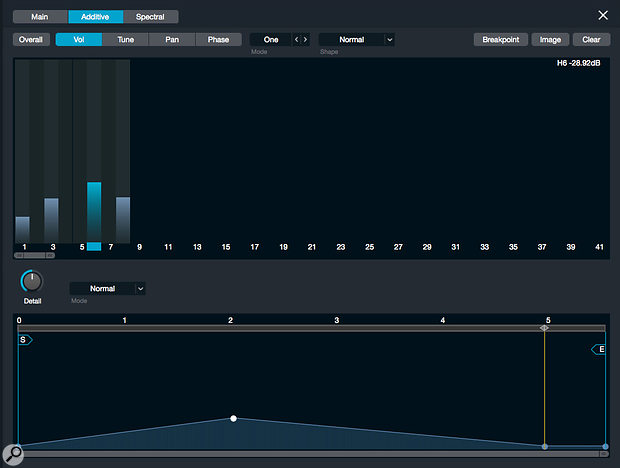 Screen 3: Here the sixth partial is selected and its volume envelope set to gradually fade in over a two-second period and then fade out.

Start with a clear patch and, on the Advanced page, go to Oscillator A and press the Edit button to bring up the Source Edit Window. By default, the main edit window is displayed, so you will need to click on the Additive button to begin the journey into additive synthesis. The Additive edit window is divided into two key sections: at the top is the Partial Bar Display, and beneath that is the Partial Envelope. Let’s begin by creating some basic waveforms. Go to the Partial Bar Display and make sure the Overall button is turned on. This will allow us to adjust all the partials of the sound across its entire duration.

To enable the Additive Oscillator you have to click and move the level of the first partial. Now play a few notes on your keyboard and notice that the patch has a pure sound with very little harmonic content, because you have only the one sine wave that corresponds to the fundamental pitch. Next, click and drag across the Partial Bar Display to create a wedge shape that decreases as it moves to the right. This adds harmonic content, making the sound brighter and creating a buzzy-sounding waveform. The Partial Bar Display acts rather like the drawbars on an organ. As you click and drag on a single partial’s slider it increases its amplitude in a similar way.

Although you can use the Partial Bar to replicate traditional waveforms, I have always felt additive synthesis is better used to create timbres that evolve in different ways to what is possible with subtractive synthesis. With that in mind let’s create a pad sound that evolves in timbre by altering which harmonics are playing at different times. Use the Clear button above the Partial Bar Display to reset the Additive Oscillator back to just the fundamental. Next, click in column eight to add the eighth partial, and set its amplitude to around three quarters that of the fundamental. To create an evolving timbre, we will need to use the Partial Envelope in the bottom half of the plug-in GUI. The Partial Envelope plots a number of points in time where each point represents a snapshot of either a group of partials or a single partial, depending on the Mode menu’s setting. Increase the length of the envelope to around 5 seconds by moving the endpoint to the right. Do this by clicking on the handle labelled ‘E’. Now do the same for the yellow Loop markers, dragging them to the far right. Lastly, drag the last envelope node to the five-second mark. 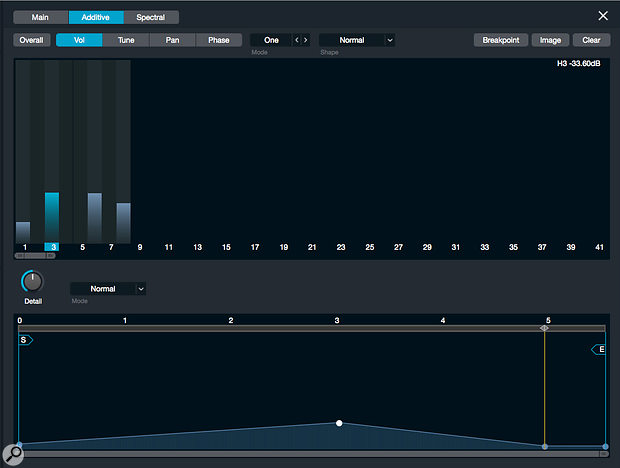 Screen 4: Here the third partial is selected; its volume envelope will gradually fade in over a three-second period and then fade out.

With the Overall button turned on, changing the spectral content of a single node will affect all other nodes. In order to isolate a node we need to set the Overall button to off. This ensures you are only editing the timbre at this point in the envelope. You can now select a partial and draw in the amplitude envelope for it. First, click underneath partial one so that it is selected, and draw in an envelope so that it fades out over five seconds (see Screen 2).

Next, add the third partial and draw its envelope such that it gradually fades in over three seconds (see Screen 4). You should now have a sound made up of four partials, each evolving in amplitude in different ways. To polish off the patch, go to the main Alchemy GUI and add the Acoustic Reverb and Mod FX Effects. There is so much more to Alchemy that there isn’t space to cover here, but it is well worth exploring the other tabs such as Tune/Pan and Phase to further manipulate the partials. Have fun!