Joining the arsenal of EZX expanders for Toontracks' EZ Drummer is Funkmasters, a slightly different offering that's split into two parts. One is a kit played by Clyde Stubblefield and the other a different kit played by John (Jab'o) Starks. Both drummers played with James Brown — and you can't get much funkier than that. But this library is aimed at a wider range of styles than funk alone, such as hip‑hop. 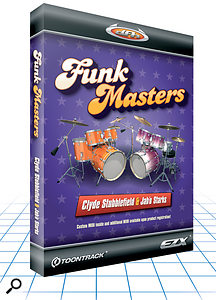 Toontrack have sampled the drum sound of these two legendary drummers and also provided a selection of genre‑specific grooves (as MIDI files). The plug‑in offers two kit interfaces, one for Clyde and one for Jab'o. Both drummers have contributed to the MIDI grooves, although additional ones are provided by other top session players — and the credits list for recording and production reads like the end of a feature film!

The format is classic EZ Drummer, but there are also some small departures. For example, each kit has a fixed set of components with no user-selectable 'swap outs', and the mixer section now includes a vinyl-effect slider, which is based on iZotope's excellent Vinyl plug‑in. You also get a large Plate reverb with its own fader, in addition to the expected room and overhead mics.

The kits were recorded at the Sound Kitchen in Nashville and the plate reverb resampled at Toontrack Music Studios. As the plate is controlled by a single fader, there's no way to use different amounts on different drums, although you can switch it off for the kick drum. Other than the plate reverb and vinyl faders, the controls all work the same as on other EZX expanders.

Both kits have their own distinct sound, with each drummer's personal choice of cymbals — but they could both be categorised as tight and natural‑sounding, with a fairly well‑damped snare drum, just as you'd expect from a funk kit. Clyde's kit is a five‑piece birch Yamaha with a 20‑inch kick drum and Meinl cymbals, whereas Jab'o opts for a five‑piece Yamaha maple custom kit with a Yamaha custom mahogany snare, and cymbals from both Meinl and Byzance. Both kits also include a wood block. The Jab'o kit has an old‑school, understated sound to it that responds really well to the vinyl fader. Clyde's is similar, but it has a bit more punch to it, and again it works nicely with the vinyl fader.

As with the other expanders, the audio quality is impeccable, both technically and subjectively, with a great dynamic range. The Vinyl effect changes the tonality of the kit, making it more 'middly' and more present, imparting a nice retro feel to the proceedings, so I can foresee this expander being used in hip-hop as a convenient alternative source of grooves to sampling real vinyl. I really liked the plate reverb too — and by juggling the room, vinyl and plate faders there's a lot of tonal variation to be had. I also found the included grooves to be musically to‑the‑point and pleasantly unfussy.

So Toontracks have done it again, and while there are more comprehensive sample‑based drum instruments on the market, including Toontracks' own Superior Drummer, EZ Drummer and its expanders provide just the right tools to let the user tailor their own drum sound without getting bogged down in complexities. Funkmasters is a great addition and will no doubt find applications in many genres outside mainstream funk. Paul White