According to Submersible, Kitcore offers "great drum sounds without all the fuss.” We put it to the test. 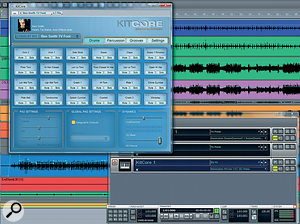 It's now over a year since the first version the Kitcore plug‑in was released by US manufacturers Submersible Music — the people behind the Drumcore sample library and playback engine. Kitcore 2 is a significant improvement over its predecessor, which, according to Submersible, was really only intended as a simple and cost‑effective way for people to make use of the Drummer Kit libraries enjoyed by Drumcore customers. For anyone who doesn't know, these Drummer Kits are collections of samples from a number of famous drummers, covering a great range of musical styles. Only now, since it's been given a more sophisticated interface (including some useful groove search and manipulation tools), is Kitcore being put out there for review.

Available in basic and Deluxe versions, the program shares much with the well‑established Drumcore, although there are some crucial differences. Firstly, Drumcore operates as a stand‑alone application accessible to your DAW only via Rewire. It has sample kits and audio loops and can be used as a means of organising third‑party sample-library data. Kitcore, on the other hand, is a plug‑in only product, which doesn't play audio loops — although it does come with a substantial library of MIDI drum and percussion patterns.

Kitcore is specifically geared towards those who prefer to create their rhythm tracks with MIDI, rather than working with loops. It is compatible with VST, Audio Units and RTAS host applications.

Anyone working across a range of material and styles would probably be best served by the Deluxe edition of Kitcore, as it ships with the widest variety of material and provides over 100 kits and 3000 MIDI grooves. Musicians working in a specific style, on the other hand, might decide to start with the basic package, comprising just eight kits and 400 grooves, and then add the particular Drummer Kit Packs relevant to their genre of music.

The list of drummers who have created Kit Packs and material for Kitcore Deluxe is extremely impressive, although there is (understandably, given Submersible's Seattle base), a bit of a US bias. The name Terry Bozzio immediately caught my eye, being an avid listener of Frank Zappa's music, but styles such as reggae, hip‑hop, rock, latin and country are covered by other top musicians. Contributors include Alan White, Lonnie Wilson, Luis Conte, Matt Sorum, Tony Braunagle, Sly Dunbar, Gary Thompson, Zoro, Michael Shrieve, Ned Douglas, Ben Smith, Jeff Anthony and John Bishop. Kitcore 2 also sees the Deluxe version updated with grooves and drum kits from Matt Cameron (Soundgarden) and John Tempesta (Helmet).

Both Deluxe and basic products provide 48 drum pads, each with its own mute and solo option, volume, pan and pitch sliders, and output assignment setting. Version 2 introduces the Groove Browser page, which offers various ways to search and audition MIDI patterns. Previously, groove loops and fills could only be auditioned by dragging the MIDI files into the host DAW or by using your computer's built‑in GM synths and media players.

Once a suitable pattern is located, which might, for example, be described as 'Triplet 12/8 Feel', then Kitcore's filters can be employed to create a menu showing just the patterns with a feel matching that description. From there on, the other patterns appearing in the list can be lined up on the fly using the Queue Play Mode so that each one kicks in seamlessly after its predecessor.

Another new feature, Live Drummer (also located on the Groove Browser page), is designed to manipulate the feel of patterns so that they can be made to sound increasingly natural or machine‑like. Whatever calculations take place behind the scenes, the user is faced with nothing more complex than a single slider. In the centre default position, nothing is added or taken away. When the slider is tugged to the left, the material is forced to sound more mechanical; lacking in dynamics and timing variation. Sliding the control to the right has the opposite effect. 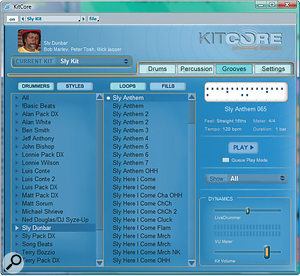 To initiate the Kitcore registration process, using a code and response system, it must first be selected as a plug‑in from within the host DAW. In Sonar, for example, Kitcore is accessed by loading it from the Synth Rack's Soft Synths menu, where it appears as a VST plug‑in, much like any other device. Submersible have tried to make all but their most exotic sounds conform to the General MIDI standard layout, so calling up a complete GM kit from the Drum Map Manager's list menu is a good starting point.

Once a MIDI drum track has been created (by dragging the data directly from Kitcore into the sequencer) it is very easy to audition the different drum kits provided by each player. If a mixture of kit sounds is required, such as a rock kit fitted with a hip‑hop style snare, for example, then the programmer must create their own custom kit, save the kit, and then select it from the menu.

Alternatively, multiple instances of Kitcore can be called up, each one controlled from a separate channel, allowing potentially complex layering of different kits and patterns. Kitcore is intelligent enough to automatically lock into the project's tempo, so whatever patterns are being overlaid, they always sync together.

The drum samples available to Kitcore and the Deluxe version are essentially the same as those found in Drumcore, and discussed in SOS reviews in the February 2005 and December 2006 editions. As you would expect, the kits have been recorded well, and each drum and percussion hit edited so that they integrate fairly seamlessly when inserted into one of the other kits. The only criticism is that, unlike Drumcore, there is no sample layer editor, so control over each sound is limited. The audio player found at www.submersiblemusic.com provides samples of each drummer's work for anyone wanting to hear for themselves.

For me, the exciting thing about the collection of kits is the range of ambiences on offer. Obviously, there are tonal differences between kits, but it is the acoustic properties of the rooms, emphasised by varying miking practices, that add an extra dimension and character sometimes lacking in sample collections. Matt Sorum's rock‑style kit, for example, is heavily affected by a very reverberant room sound, whereas hearing Sly Dunbar's relatively dry kit makes you feel as though you're sitting about a foot away.

Despite the addition of the Groove Browser page, auditioning loads of patterns in search of the right thing is the one potential hindrance to the creative flow, although the software's search filters are effective. Drummers will probably look at a groove's title and know just what they are getting, but for non‑drumming programmers, who can hear the pattern in their head but have no idea how that reads on paper, it is a matter of auditioning loads of stuff. I would also like to be able to chain together a few patterns in the program itself before importing them into my sequencer. This is partly addressed by the Queue Play Mode function, but something a little more compositionally flexible would be great. After all, it is possible to create and save a custom kit, why not a custom chain of loops and fills? That said, anyone looking to build a drum track as an inspiring starting point to a song will find Kitcore's MIDI grooves very useful.

Submersible state that they want their software to be usable without reference to a manual and, indeed, it is extremely straightforward. Ultimately, it is only the facilities of the host DAW that are likely to complicate matters.

Overall, Kitcore is a no‑fuss program seriously worth considering, if only to get hold of the impressive player library. It is much less complex than most stand‑alone products, and even some standard DAW kits, and, at $99, is a very affordable way to seriously bolster a library.

As a plug‑in, Kitcore can't really be compared to stand‑alone products like FXpansion's BFD2 or Toontrack's Superior Drummer 2, and is more akin to something like Toontrack EZplayer Pro, which is similar in concept. The last offers more control, but it relies on EZdrummer or Superior Drummer for its sample content.

An elegantly simple product, made very attractive by its impressive libraries of MIDI loops and audio samples.