Vintage digital reverbs might not be totally realistic, but they have bags of character. Universal Audio's latest plug‑in brings the venerated Lexicon 224 to your DSP card. 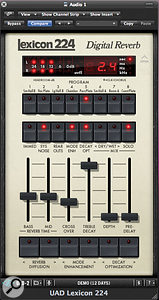 Digital reverb has come a long way since Lexicon and other manufacturers first introduced it to the studio world. Today's processors are capable of far more realistic results than the early machines, but as usually happens when we make so‑called progress, we now realise that some aspects of the old way actually work better than the new way. And so it is with some types of reverb, where the bright, grainy sound of the early digital models added a certain steamy magic to pop productions of the era. It is probably fair to say that the real gems of the time were the AMS RMX16, the EMT 250 and, of course, the Lexicon 224, with its familiar LARC remote controller. Based on pioneering work by Dr David Griesinger, the Lexicon 224's lush sound has graced countless hit records, and even today its unique character has kept it many friends in the higher echelons of recording. The 224's 'Concert Hall A' program is particularly well respected, while its plate settings are heard all over '80s drum sounds.

Universal Audio are best known for their exemplary modelling of classic analogue gear, but in the case of the Lexicon 224 plug‑in, they have licensed the actual digital algorithms from the original Lexicon hardware, offering eight different reverb types plus one chorus setting. However, UA still had some additional modelling work to do to capture the character and coloration of the input and output stages, including the input transformers and the somewhat primitive 12‑bit, gain‑stepping A‑D and D‑A converters used at the time. These old technologies added low‑level noise as well as character, so UA have included the facility to disable the System Noise modelling for a cleaner, more up‑to‑date sound (although once the reverb is in a mix, the difference between the two settings is incredibly subtle).

UA have even replicated some faults of the original 'Hall B' and 'Chorus' programs, but have also created a fix, so you have the choice of 'with or without bugs' if you click the UA logo. The default is no bugs, which seems sensible, as the bugs in the original caused occasional unpredictable noise.

The Look Of LARC 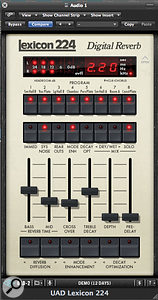 The 'hidden' ninth program is a lush, eight‑voice chorus effect.

The plug‑in interface resembles the original, with an upper row of buttons that select one of eight programs, and groups of buttons and faders below these to select and adjust parameter values. However, some buttons on the original were not relevant to plug‑in life, so have been reallocated here to ensure that there is no longer any need for multi‑function buttons.

Variable parameters include the Bass/Mid split decay and crossover fader settings of the original, along with a Treble Decay adjustment for rolling off excessive highs. Depth manipulates the reverb build‑up, to change the subjective distance between source and listener, while Pre‑delay adds the usual adjustable short delay between the dry sound and the onset of reverb. Adjusted using Up/Down buttons below the faders, Diffusion sets how quickly the echo density in the reverb tail builds up after the initial sound. Mode Enhancement modulates specific delays within the algorithms, to add complexity and reduce ringing in the reverb tail, and was probably the forerunner to Lexicon's now familiar Spin and Wander parameters, while Decay Optimisation links the reverb density to the input signal level. Not all the programs incorporate all these features: where they're not used, the button LED doesn't illuminate. Dry/Wet balance and wet‑only (solo) options simplify use in both insert points and aux sends and returns. UA have also managed to gather together a set of presets crafted by top engineers and producers, although user patches can, of course, be created and stored as usual.

Clicking the Open button brings up additional controls at the top of the screen, specifically input and ouput gain adjustment (which can be independent for the left and right channels or linked), Pitch Shift up and down buttons (which relate to the Mode Enhancement feature), and the display Hold switch. Parameters are displayed as they are edited and then for a further 1.5 seconds, after which the display reverts to showing decay time unless the Display Hold switch is set to infinite, in which case the last edited parameter value continues to be displayed. 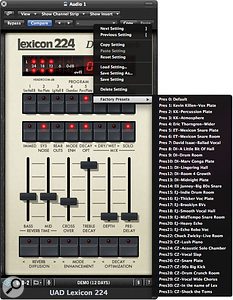 A big bonus with UA's plug‑in recreation of the 224 is the inclusion of many presets from big‑name engineers.

Before the plug‑in can be used effectively, you need to get used to a few operational quirks inherited from the original. For instance, the first click of an increment/decrement button displays the current value of the parameter, but the value itself is actually changed only with subsequent clicks. The six faders control the most important values for editing, and clicking a slider knob shows its value in the display window. Clicking a fader's text label restores that fader's default value for the current program. Selecting the chorus effect — program nine — is achieved by clicking on the word 'Chorus' just above program buttons seven and eight, whereupon all eight program LEDs illuminate. A dedicated button would have been more intuitive, if less authentic! As with the hardware, extreme parameter settings in some programs can cause the plug‑in to self‑oscillate, so this really is a 'warts and all' recreation.

Reverb Time is adjusted using both the Bass and Mid decay time controls — there's no overall decay parameter as there is with most reverbs — with the Crossover value determining where the Bass leaves off and the Mid takes over. The additional Treble Decay parameter adjusts the amount of high frequencies in the reverb tail, but Mid adjusts the mid/high decay time.

When the Immed (Immediate) button is on, current parameter values are retained even when a new program is selected; otherwise the default values for the new program are loaded. When System Noise is disabled, any zipper noise inherent in the delay modulation introduced by Mode Enhancement is reduced, but not completely vanquished. The Pitch Shift controls, which relate to the modulation depth, have no effect unless Mode Enhancement is switched on. Decay Optimization is, by default, optimised for each program but its amount can still be adjusted. 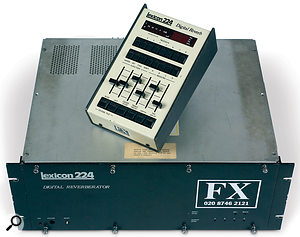 The original Lexicon 224, with its LARC remote control, has been a fixture in recording studios for 30 years, and is still widely used.

When I first dialled in the 'Percussion Plate A' program and cranked up the level to hear what it was doing, I thought it sounded slightly metallic and ringy, but when you balance it with the dry sound, it seems much more comfortable, and after all, mechanical plates did tend to ring somewhat. The same could be said of the vocal plate, but in context it just seems to work, sitting the vocal in the mix without swamping it, especially if you add some pre‑delay. All the halls have their own character, which can add a nice shimmer to the sound, especially if you set the low decay time lower than the high decay time. Juggling the density, diffusion and modulation settings enables you to go from charmingly coarse to very smooth and dense, and I like how the hall emulations lean towards the room type they purport to emulate but not so far that they impose too much of a room character on the sound. Some modern reverbs are so lifelike you can almost see the wood panelling and plaster coving, but in a pop mix, it sometimes helps to have something a little more anonymous‑sounding and that's where the 224 strikes a good balance.

The bottom line is that the 224 plug‑in sounds as you'd expect a Lexicon 224 reverb to sound, and although its modern counterparts might be better at emulating specific types of room or space, the 224 sound sits well in a pop mix and doesn't overwhelm the source sound, even when used at quite generous levels. The more I play with newer reverbs, the more I find myself going back to old‑style algorithmic reverbs or the EMT 140 plate emulation — they're the audio equivalent of putting on a comfortable pair of shoes. Best of all, where the original 224 cost around the price of a car, this plug‑in is closer to the cost of a push‑bike!

UA's emulation of the early EMT 250 digital reverb comes closest in terms of vintage character, though you could also look at the Softube TSAR1 reverb plug‑in and eaReckon's EAReverb. A company called Relab (www.relab.dk) are developing an emulation of the later and more sophisticated Lexicon 480L, though at the time of writing, only a 'Lite' version of their LX480 is available. Lexicon themselves have also made the latest versions of their own reverb algorithms available in native plug‑in form as the PCM Native Reverb Bundle.

Those Programs In Full

The hardware version of the Lexicon 224 has two inputs and four outputs, for surround applications. Both mono‑in/stereo‑out and stereo‑in/stereo‑out modes are supported by the plug‑in, as well as mono‑in/mono‑out. When the selected program algorithm generates the extra channels, these too can be reproduced, but unlike the original hardware, the plug‑in can only generate two outputs at a time — where four outputs are on offer, you can select 'front' or 'rear' versions but not both at once. If you do want true quadraphonic surround reverb, you could set up two sends feeding two instances of the plug‑in running the same program, one set to the front and the other to the rear outputs.

This classic vintage reverb is a welcome addition to the UAD stable.