Ueberschall's Urban sample pack targets the mainstream end of the genre, and is ideal for those wanting an, er, urban edge to their music. The library contains a total of 1727 (1.9GB) loops and samples and uses the Elastik 2 player, either as a plug-in or stand-alone. 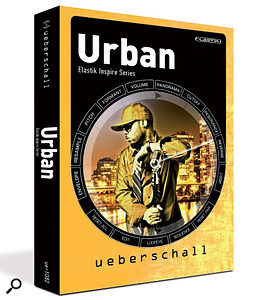 There are seven Urban Inspire kits that are good to go, featuring pitched and percussive loops. The pack contains a decent number of drum kits — 38 in total — broken down into three sub-genres: crunk, hip-hop and R&B. These contain loops ranging from 67 to 114 bpm. Some of the kits have unambiguous names, such as 'Solider', 'Dr D', 'Timbertoon' and, a personal favourite, 'Booty Child'. Using credible drum patterns, they are a reasonable attempt at recreating the characteristic sonic palette associated with some of the big names in urban music. A grumble on the drum front is that there are no one-shot samples for triggering. However, similar results can be achieved with the Elastik player by adjusting the loop start point.

The pitched loops (all in 'E') cover a range of instrument sounds, such as guitar chords and licks, synth basses and even sound effects. The most notable of the pitched loops are the Keys, which contain a good number of versatile and stylistically tailored samples. The soulful electric piano riffs fit the bill, coming processed (tremolo and wah filter) and unprocessed, and would stack up well in the arsenal of any hip-hop producer. Having said that, the Keys folder also contains synthesized flute riffs that I doubt will see the light of day too often.

Unfortunately, it appears that some of the production has been rushed, with acoustic guitar loops suffering from low-end rumble, and the odd sample with audible pops due to poor edits. Nevertheless, whether you're a seasoned urban producer or novice, Ueberschall deliver authentic gems ready for immediate use. Dave Walker