SOS have reviewed a number of UJAM’s Virtual Drummer (VD) instruments over the last couple of years. Each title provides a combination of style‑specific drum sounds and MIDI‑based grooves, housed in a UI and engine that is specifically designed to encourage an efficient workflow and avoid parameter paralysis. The latest addition to UJAM’s VD instruments series is BRUTE and, as the title suggests, the sounds and playing styles are aimed at the more raucous end of the musical scale; think rock, garage, punk and grunge. 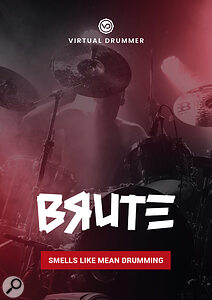 The 3GB of sample content provides five distinct drum kits while you also get six global mix presets. And while BRUTE is easy to use, you do still get options for tweaking the drum sounds, mixing and matching individual drums between the kits, balancing the amount of room/overhead ambience, adjusting the decay, tuning and reverb on each kit item and dialling in compression and saturation amounts. This gives you pretty broard scope in taking the raw drum sound from natural to overblown as suits your needs.

The other key element of the UJAM VD series is the included performance options. With BRUTE that provides 31 different playing Style presets, each containing 23 individual patterns. For each preset, these are mapped across the MIDI note range C3‑B4 for easy triggering/sequencing, while individual drum sounds are mapped across C1‑B2 for manual playing. You can also drag‑and‑drop patterns to a MIDI track in your DAW/sequencer if you want to edit the patterns or create variations. If your musical muse has hit, and you need to get a full drum performance created in double‑quick time, all UJAM’s VD instruments (BRUTE included) make it incredibly easy to so.

Given the genre targets, it’s perhaps not surprising that BRUTE’s sounds and performances have a certain amount of attitude; it can be big, aggressive and full‑on. Indeed, once I’d added a couple of rowdy guitars and a gritty bass, there were times I found myself easing BRUTE back a little to make some space in the mix, particularly in some of the busier patterns featuring lots of splashy cymbals. That said, in the target styles, I’d rather have the surplus of attitude and dial it back than not enough attitude and a wimpy drum track.

While you don’t necessarily get the level of control offered by the likes of EZdrummer or Superior Drummer, if you want to build a great‑sounding drum part with the minimum of fuss, UJAM’s approach will undoubtedly appeal. If you are looking for something more mainstream rock, VD SOLID might be a better starting point, but BRUTE is ideal for loud, proud and likely to scare the neighbours. As with all UJAM’s products, you can, of course, download a free trial version via their website to audition for yourself.